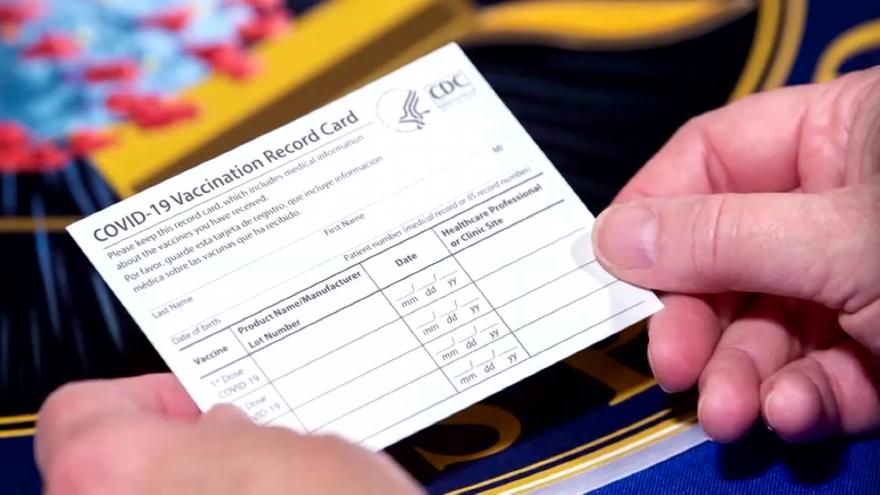 (CNN) -- US Customs and Border Protection officers in Memphis, Tennessee, have seized thousands of fake Covid-19 vaccination cards so far this year.

The cards have spaces where the recipient can write their name, birth date and vaccine information. The cards also come with a US Centers for Disease Control and Prevention logo on the top.

"However, there were typos, unfinished words, and some of the Spanish verbiage on the back was misspelled," CBP said. "How else did they [CBP officers] know it was counterfeit? It was imported by a non-CDC or medical entity, and this was not the first time they had seen this shipper."

Patrol officers working at the Area Port in Memphis confiscate multiple fake vaccine card shipments -- sometimes up to 15 -- every day, according to CBP. The packages are often labeled as "Paper Greeting Cards/Use For-Greeting Card" or "PAPER PAPER CARD."

So far, Memphis CBPO have seized 121 packages containing 3,017 cards, according to CBP.

"These vaccinations are free and available everywhere," Area Port Director of Memphis Michael Neipert said in the release. "If you do not wish to receive a vaccine, that is your decision. But don't order a counterfeit, waste my officer's time, break the law, and misrepresent yourself."

"CBP Officers at the Area Port of Memphis remain committed to stopping counterfeit smuggling and helping to protect our communities," Neipert said. "But just know that when you order a fake vaxx card, you are using my officers time as they also seize fentanyl and methamphetamines."

Vaccination cards were not designed to be long-term proof of Covid vaccinations, according to the Federal Trade Commission. Forging the cards is a federal crime, punishable by a fine and up to five years in prison for forging government seals found on the card.