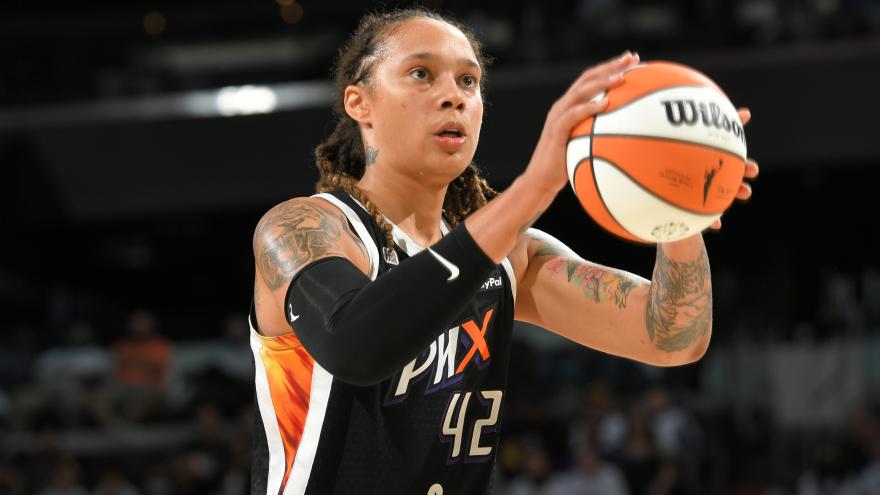 (CNN) -- Friends and family of two-time Olympic gold medalist Brittney Griner are demanding the US basketball star's release after she was detained in Russia on drug charges.

Now, hundreds of strangers have joined the effort as US-Russian tensions escalate amid Russia's invasion of Ukraine.

Griner, 31, is a championship-winning player with the WNBA's Phoenix Mercury and spends her offseasons playing for the Russian team UMMC Ekaterinburg.

The Russian Federal Customs Service said an American at Sheremetyevo Airport was carrying hash oil. Russia's Interfax News Agency quoted a statement from the Customs Service, which did not identify the traveler by name:

"As a US citizen was passing through the green channel at Sheremetyevo Airport upon arriving from New York, a working dog from the Sheremetyevo Customs canine department detected the possible presence of narcotic substances in the accompanying luggage," the statement said.

"The customs inspection of the hand luggage being carried by the US citizen confirmed the presence of vapes with specifically smelling liquid, and an expert determined that the liquid was cannabis oil (hash oil), which is a narcotic substance."

The New York Times was first to report Griner's arrest.

It's unclear exactly when Griner was detained at the airport and her whereabouts since the detention are also not clear.

Griner's ordeal comes as the Russian invasion of Ukraine is in its second week. President Vladimir Putin issued a series of threats Saturday against Ukraine and Western powers, saying the sanctions introduced on his country are "equivalent of a declaration of war."

More than 700 people have signed the "Secure Brittney Griner's Swift and Safe Return to the U.S." petition on Change.org.

"Griner is a beloved global citizen who has used her platform since her entry into the WNBA to help others," Spruill wrote on the petition's web page.

"Griner was in Russia for work: playing for UMMC Ekaterinburg, where in 2021 she helped the team win its fifth EuroLeague Women championship."

Spruill explained why many female professional basketball players in the US work overseas. "Like many athletes competing in the WNBA, Griner plays abroad during the WNBA offseason because her salary is exponentially higher in other countries," Spruill wrote.

"For WNBA players, that means playing abroad, while NBA rookies who haven't played a professional game yet are handed salaries many-times higher that what title-winning, All-Star designated WNBA veterans could ever hope for," the petition says.

"These realities are not the fault of the players. They simply want to be paid their worth like their male counterparts, and they do not deserve to be entangled in geopolitical turmoil for doing so."

Griner's wife, Cherelle Griner, posted a picture of her and her wife on Instagram on Saturday, thanking those who have prayed and reached out in support of the basketball star's safe return to the United States.

"I love my wife wholeheartedly, so this message comes during one of the weakest moments of my life," Cherelle Griner posted.

"I understand that many of you have grown to love BG over the years and have concerns and want details. Please honor our privacy as we continue to work on getting my wife home safely."

A criminal case has been opened against the US citizen arrested, Interfax reported, citing Russia's customs service.

A spokesperson for the US State Department said the agency is "aware of reports of a US citizen arrested in Moscow."

"Whenever a US citizen is arrested overseas, we stand ready to provide all appropriate consular services," the spokesperson told CNN on Saturday.

CNN has reached out to Griner's representative for comment.

Playing in Russia for years

Griner has played with Russia's UMMC Ekaterinburg since 2015 during the WNBA offseason. In five games this season, she has averaged 13.2 points and 4.2 rebounds per game.

The star player, who won the WNBA championship with the Mercury in 2014, averaged 20.5 points and 9.5 rebounds per game last season with Phoenix.

Griner is also a two-time medalist at the FIBA Women's Basketball World Championship with Team USA.

USA Basketball, the governing body for sport in the United States, said it is "aware of and closely monitoring the legal situation facing Brittney Griner in Russia. Brittney has always handled herself with the utmost professionalism during her long tenure with USA Basketball and her safety and wellbeing are our primary concerns."

The WNBA said Griner has its "full support," adding its main priority is "her swift and safe return to the United States."

The Women's National Basketball Players Association said it is "aware of the situation in Russia concerning one of our members, Brittney Griner."

"Our utmost concern is BG's safety and well-being," the WNBPA said. "We will continue to closely monitor and look forward to her return to the US."

The Phoenix Mercury said it is "closely monitoring the situation with Brittney Griner in Russia" as they remain in "constant contact with her family, her representation, the WNBA and NBA. We love and support Brittney and at this time our main concern is her safety, physical and mental health, and her safe return home."