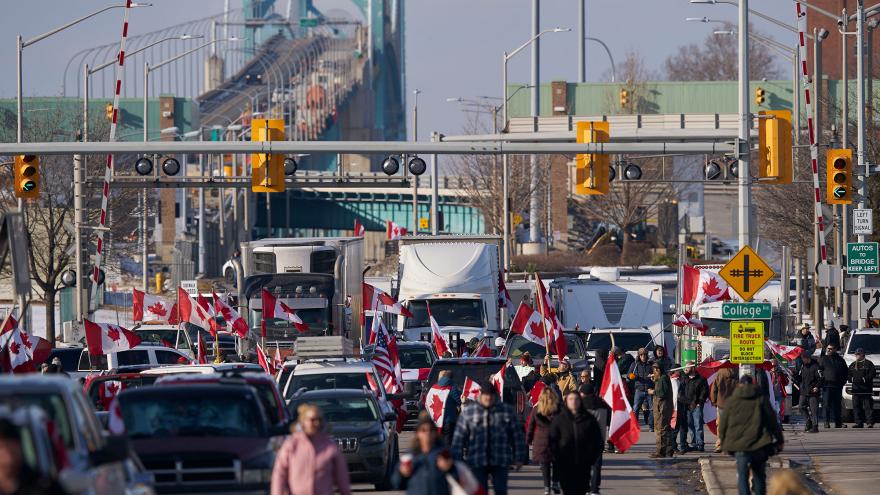 (CNN) -- After a year of computer chip shortages, supply chain problems and temporary plant closings, this was about the last thing the auto industry needed.

The protests by Canadian truckers, upset with Canadian vaccine mandates, have been tying up traffic on the Ambassador Bridge between Windsor, Ontario and Detroit, a key chokepoint for goods moving between the two countries. It has become yet another supply chain problem for automakers.

Plants on both sides of the border, from the Toronto suburb of Brampton, Ontario to Georgetown, Kentucky some 600 miles away, found their assembly lines slowing or shutting down because they can't get the parts they need over their common border.

"The current border disruptions at the Detroit-Windsor Ambassador Bridge and other crossings are adding additional strain to the automotive supply chain that has already been stressed by semiconductor shortages and other pandemic-related issues," said a coalition of three auto industry trade groups, including those representing automakers and parts suppliers, in a statement Thursday.

"US automakers and suppliers are doing everything possible to maximize production with what they have, working to keep lines running and shifts scheduled to minimize the impact on American autoworkers," the statement said, "but the situation has already led to reduced production and may spread the longer the disruptions persist."

There is no separate Canadian auto industry. Plants there are all owned and run by global automakers whose North American operations are consolidated with their US and Mexican plants.

The industry has been dealing with a variety of parts shortages for more than a year, particularly computer chips, but supply chain issues on multiple fronts have caused a crimp in production for virtually all automakers and resulted in widespread albeit temporary auto plant closings as a result.

That has resulted in tight inventories of cars and trucks at dealer showrooms, which in turn translated into record high car prices.

So far, at least, the shortages are unlikely to add to the tight supply or high prices, said Bernard Swiecki, director of research at the Center for Automotive Research, a Michigan think tank, which will have a delayed effect on pricing.

"It will inevitably be added onto the price increases, But the order of magnitude is weeks," he said, adding that the impact will depend on how many plants have to shut down and for how long. However, he added, "the longer this goes on, the more the built in buffers of given components run out, the more plants will start going down."

Among the automakers reporting disruptions to their normal operations Thursday, Ford said it was running its factories at reduced capacity in Oakville, Ontario, where it builds the Ford Edge and Lincoln Nautilus SUVs, as well as in Windsor, where it builds engines for its Super Duty pickups.

"This interruption on the Detroit/Windsor bridge hurts customers, auto workers, suppliers, communities and companies on both sides of the border that are already two years into parts shortages resulting from the global semiconductor issue, Covid and more," said Fordin its statement. "We hope this situation is resolved quickly because it could have widespread impact on all automakers in the US and Canada."

Stellantis reported that a number of its US and Canadian plants had cut short their second shifts Wednesday night but all its plants were running as of Thursday morning. It also had shortened the first shift Wednesday at the Brampton, Ontario plant that makes the Chrysler 300, Dodge Challenger, Dodge Charger.

Toyota said that its plants in Canada and Kentucky are also affected by the Ambassador Bridge blockade.

"We expect disruptions through the weekend, and we'll continue to make adjustments as needed," said the automaker, which led the industry in US vehicle sales for the first time in 2021. "While the situation is fluid and changes frequently, we do not anticipate any impact to employment at this time."

Honda reported that its plant in Alliston, Ontario temporarily suspended manufacturing on one production line Wednesday evening due to border delays, but it was back online Thursday.