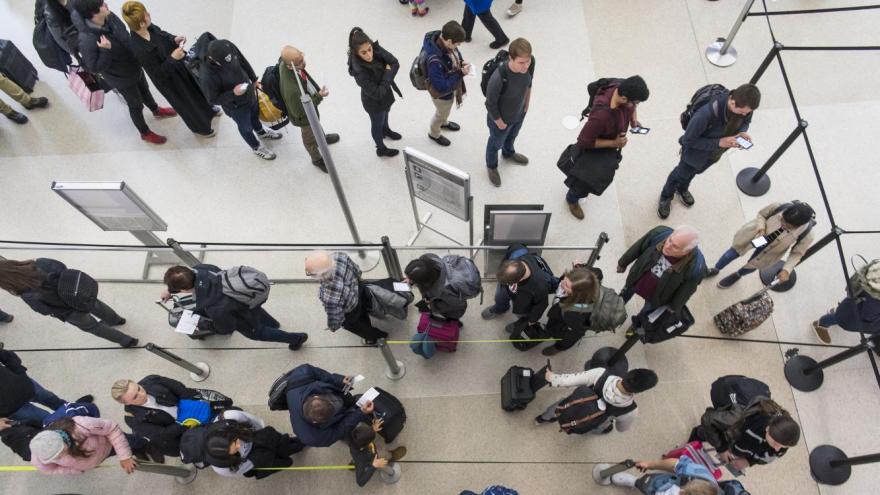 (CNN) -- After months of stringent international travel restrictions, efforts are underway to open travel between London and New York City, according to sources familiar with the plans.

There is ongoing planning for a pilot program that would use a combination of testing and quarantines to help get international air traffic moving again, according to one of the sources familiar with the plans. The NYC-London route would be a pilot route for the program.

However, the program is "far from a done deal yet," the source said.

Earlier this year, the US implemented a set of severe travel restrictions as the Trump administration grappled with how to handle the spreading coronavirus pandemic, which included banning travelers from dozens of countries, rerouting flights and diverting thousands of airline passengers for medical screening. In March, the administration expanded its restrictions from Europe to include the United Kingdom and Ireland as it tried to slow the spread of the coronavirus. The US had already blocked certain travel from Iran and China.

In the months that followed, international air travel to the US plummeted.

As officials look to reopen, the question is if both governments can get to "yes" on less than a 14-day quarantine, according to the source, who added that even if that's done, there are still potential problems related to state and local requirements.

News of the program was first reported by The Wall Street Journal.

A Department of Homeland Security official told CNN: "We're at the early stages of working with our interagency partners, the industry, and our international partners for means to safely encourage transatlantic travel while mitigating public health risks."

Officials are hoping to open travel between the two cities before the end of the year, but there are still details to be worked out and the timing is unclear, an administration official said. "We want to get to a program. We are trying to figure out what an opening would look like," such as "what criteria we would have to meet" and "who would be responsible," the official said.

To open travel, officials are going to want a "recent negative test," but it is still unclear who would collect the information and verify the results, according to an administration official. "Who is going to verify the negative test? Who will do that -- TSA, the airlines? It hasn't matured yet to a pilot program yet," the official said.

Knowing that quarantines aren't something the US has been able to enforce, it may be a recommendation but likely not a requirement to allow trans-Atlantic travel, the official said.

On September 22, the International Air Transport Association called for coronavirus testing at airports as a requirement for all passengers and airplane crew members before international flights.

The group, which represents about 290 airlines worldwide, called on governments to set up and fund the testing regimen.

Last month, United Airlines announced it would offer coronavirus testing to some of its passengers -- becoming the first US airline to do so. In a pilot testing program that the airline plans to extend to other destinations, United will offer testing for Hawaii-bound passengers beginning Thursday out of San Francisco.

The testing will help passengers avoid an otherwise mandatory, 14-day quarantine in Hawaii.

Some travel restrictions have already begun to ease.

In September, CNN reported that the Trump administration planned to end coronavirus screenings of passengers arriving to the US from overseas. The US began conducting enhanced screenings of passengers arriving from Wuhan, China at select airports in January. Last month, the US stopped limiting international arrivals from certain countries to 15 airports and funneling them through enhanced screening. Instead, passengers will be advised about risks.