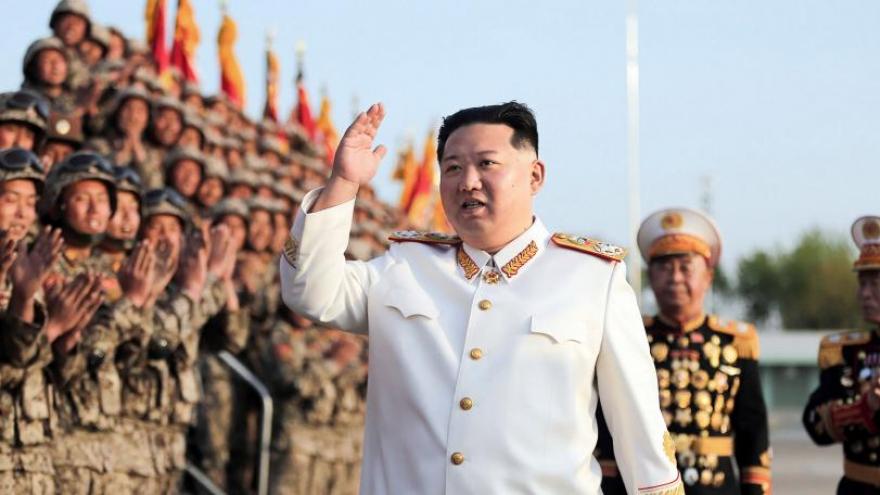 US assesses that North Korean leader Kim Jong Un may be ready to conduct underground nuclear test this month.

(CNN) -- US military and intelligence agencies assess that North Korea could be ready to resume underground nuclear testing this month, according to three US officials.

The assessment concludes that Kim Jong Un's government is making preparations at the Punggye-ri nuclear test site and could be ready to conduct a test by the end of the month. Signs of personnel and vehicle activity at the site have been seen through satellite imagery, but the officials do not know if the regime has placed nuclear material in one of the underground tunnels at the test site, which the US has been closely watching.

If North Korea conducts a test, it would be the country's seventh underground nuclear test and the first in nearly five years.

US President Joe Biden is scheduled to visit South Korea and Japan later this month. It wouldn't be the first time the threat of a nuclear test has loomed over a presidential visit: North Korea was preparing for a test in 2014 when President Barack Obama visited South Korea, and in 2016, North Korea conducted a nuclear test shortly after Obama and other world leaders departed Asia following a summit.

White House press secretary Jen Psaki said Thursday that the White House is not concerned about the President's travel to East Asia later this month.

"I would say we certainly always assess security as we do with any of the President's travel but that has not been a concern as it relates to his travel coming up in just a few weeks," Psaki said.

She added: "There's no question that North Korea is going to be on the agenda when he visits South Korea and Japan."

"The United States assesses that the DPRK is preparing its Punggye-ri test site and could be ready to conduct a test there as early as this month, which would be its seventh test," principal deputy spokesperson Jalina Porter said during a phone briefing.

Porter said the US assessment is consistent with North Korea's recent public statements.

"We've shared this information with allies and partners and will continue closely coordinating with them as well," Porter noted.

"We'll also build on this close coordination when the President travels to the Republic of Korea and Japan later this month to strengthen our alliances and demonstrate that our commitment to their security is ironclad," she added.

Last month, CNN reported that satellite imagery showed North Korea was tunneling again at its remote underground nuclear test site to potentially shorten the time it needed to conduct its next test.

According to the satellite imagery, the crosscut tunnel at the test site intersects with one of the main tunnels beyond the entrance, meaning there is a shorter distance to the underground launch area. In 2018, North Korea blew up the original entrance to the tunnel but likely did not destroy the entire underground structure.

Pentagon spokesman John Kirby told reporters Wednesday the Pentagon was "very deeply concerned" by North Korea's missile tests, adding that the US and international community has condemned the provocations.

"There's never a good time quite frankly for the DPRK to conduct these kinds of tests," Kirby said. "We continue to call on the North to stop these provocative tests and to be willing to sit down, as we have offered we would be willing to do without pre-condition, and to discuss a diplomatic way forward here to de-nuclearize the North."

Last month, Kim vowed to ramp up his country's development of nuclear arms, saying during a military parade that Pyongyang would "strengthen and develop" its nuclear forces at the "highest possible" speed.

Wednesday's missile test was North Korea's 13th this year, compared to eight in 2021 and four in 2020. This year's tests included a March ICBM launch, the first time Pyongyang had launched that type of missile in four years.