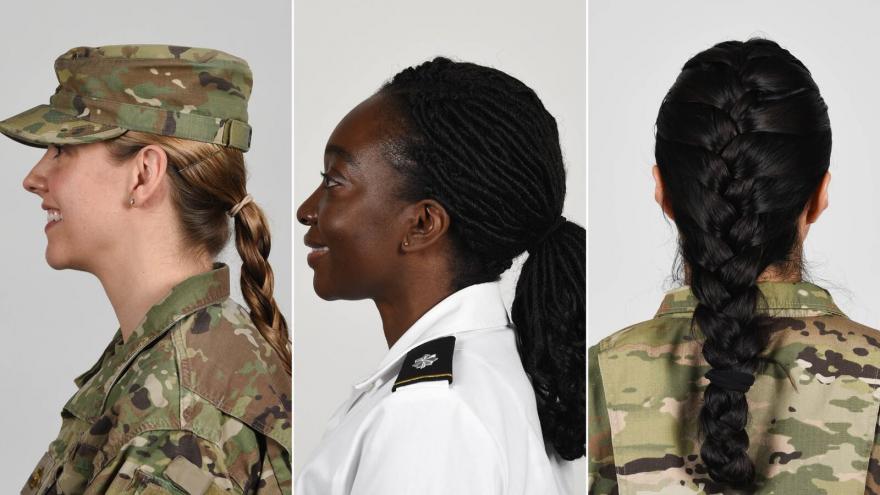 (CNN) -- The US Army announced a change to its grooming policy on Thursday, allowing female soldiers to wear ponytails in all uniforms.

In January, the Army announced new policies that allowed soldiers to wear ponytails, locs, lipstick and earrings. They were permitted to wear medium-length ponytails on the back of the scalp that did not interfere with the fit of headgear. The Army also allowed women to wear ponytails while wearing Army combat uniforms or wearing headgear during tactical training or combat.

Under the updated policy, braids and ponytails may be worn down the center of the back in all uniforms, but the length cannot go past the bottom of the shoulder blades while at the position of attention. There is no minimum length for a ponytail or braid. One exception on length is during tactical or physical training, so it can't "hinder a Soldier's performance or present a safety risk."

Hair may "be neatly and inconspicuously fastened or secured in either a bun, single ponytail, two braids or a single braid."

"This new modification is more practical for our female Soldiers. It allows them flexibility in a tactical environment, while maintaining a professional appearance in garrison," said Sgt. Maj. Brian C. Sanders, Army G-1 Uniform Policy Branch sergeant major. "This change also helps to alleviate hair loss and damage to the scalp."

Sanders said commanders will "analyze the risk of a free hanging ponytail or braid" and use "discretion to determine if long hair will be secured or tucked inside the uniform top."

Lt. Col. Junel Jeffrey, an Army spokesperson, told CNN the policy is effective now and will post by end of the day on Thursday.

A review of the Army's grooming policy was ordered last year by then-acting Secretary of Defense Mark Esper in an effort to address race and inequality in the military.