US announces troop drawdown in Iraq 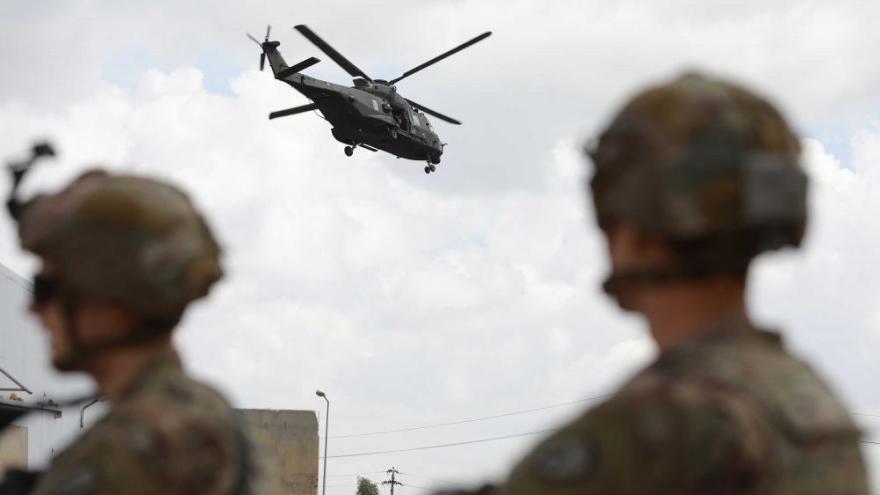 US soldiers stand guard at the K1 Air Base near Kirkuk in northern Iraq on in March 2020.

(CNN) -- The US commander in the Middle East announced Wednesday a drawdown of US troops in Iraq from 5,200 to 3,000 in the month of September.

"This reduced footprint allows us to continue advising and assisting our Iraqi partners in rooting out the final remnants of ISIS in Iraq and ensuring its enduring defeat," Gen. Frank McKenzie, commander of US Central Command, said.

McKenzie said the decision is due to the United States' "confidence in the Iraqi Security Forces' increased ability to operate independently."

A senior administration official told reporters on Tuesday to also expect an announcement on troop withdrawal from Afghanistan in a couple days.

The decision to pull back US troops from Iraq has long been expected and comes as President Donald Trump attempts to deliver on his 2016 campaign promises while facing a tough reelection. Trump was recently visibly distressed over the fallout that ensued from an article in The Atlantic, alleging that he privately disparaged the war dead, and feared losing support with the military. Trump has forcefully denied he made those comments.

But in a Labor Day news conference, Trump accused top Pentagon military leaders of being beholden to defense contractors, an unprecedented attack from the commander in chief as he tries to convince the American public he did not denigrate US military personnel.

In recent months, training and advising of Iraqi forces has been scaled back due to the coronavirus, and other coalition allies have also withdrawn their troops.

In March, US forces began pulling back from bases across Iraq, turning them over to Iraqi security partners. At the time, Pentagon officials insisted that the base hand-offs were part of a long-planned consolidation that reflected the success of the anti-ISIS fight -- not concerns over the ongoing rocket attacks by Iran-linked proxy militias.

"The threat against our forces from Shiite militant groups has caused us to put resources that we would otherwise use against ISIS to provide for our own defense and that has lowered our ability to work effectively against them," McKenzie said in late August.

On Wednesday, McKenzie reiterated that justification, saying that Iraqi security forces had improved their ability to fight ISIS and that "the fact that we're getting smaller is actually a sign of campaign progress."

But the CENTCOM commander also explicitly linked the withdrawals to the threat from Iran.

"Over the last seven or eight months, we have had to devote resources to self-protection that we would otherwise devote for the counter-ISIS fight and we've had to pull back and our partners have had to pull back," he said. "At the same time we've done things to harden our positions to make it more difficult for Iran to attack us in Iraq -- but it has had an effect."

The US has been under pressure from some elements of Iraq's political system to withdraw American troops from Iraq following the Trump administration's decision to kill Iranian Gen. Qasem Soleimani in an airstrike in January while he was traveling in Baghdad. That strike also killed a leader of an Iranian-backed militia group that is ostensibly part of Iraq's security forces.

After the targeted killing, Iraq's parliament voted to expel the US military and hundreds of thousands of protesters marched through Baghdad calling for US troops to leave the country, but the Trump administration said it did not intend to pull troops out.

CNN previously reported that the Trump administration plans to reduce the number of US troops in Afghanistan from 8,600 to 4,500, which would be the lowest number since the very earliest days of the Afghanistan war.

Under an agreement signed with the Taliban in February, the US committed to pulling all of its troops out of Afghanistan by next April, if the Taliban upheld certain commitments in the agreement.

The US is also withdrawing nearly 12,000 troops from NATO-ally Germany -- a move that will cost billions to execute and take years to relocate the troops. The decision has also been met with bipartisan congressional opposition amid concerns that it may encourage Russian aggression.

In August, Trump met with Iraq's new prime minister, Mustafa al-Kadhimi, in the Oval Office and reiterated his plan to remove troops from Iraq.

"We have been taking our troops out of Iraq fairly rapidly, and we look forward to the day when we don't have to be there," Trump said.