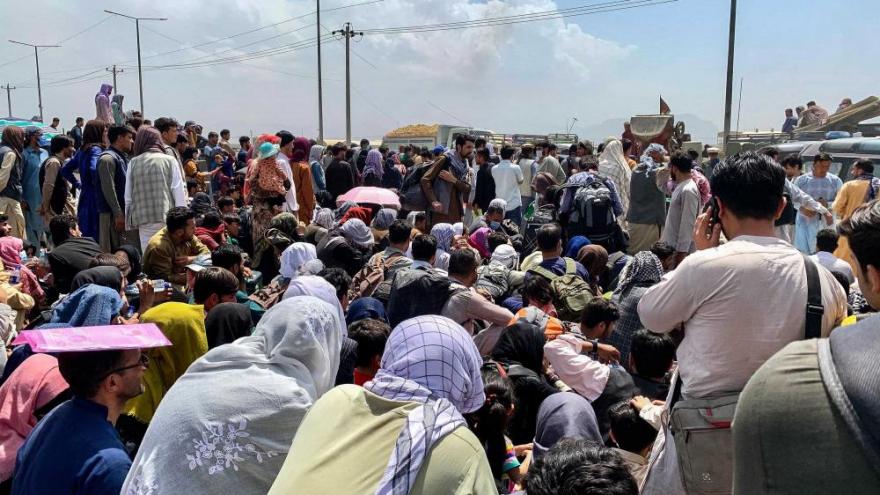 Afghan people wait to board a U S military aircraft to leave the country, at a military airport in Kabul on August 20.

(CNN) -- Chaotic scenes played out at Kabul airport again on Friday as thousands desperate to leave Afghanistan sought to reach evacuation flights, a backlog developed as the US briefly ran out of places to fly them and President Joe Biden pledged to Americans trapped in the country that he will get them out.

As the United States continued its scramble to secure the Hamid Karzai International Airport and evacuate US citizens and vulnerable Afghans, US officials announced a dramatic expansion in the countries that will help transit or temporarily host people fleeing the Taliban. Biden meanwhile warned the evacuation operation continues to be perilous and its outcome uncertain but said that the US "will do everything that we can to provide safe evacuation."

"Any American who wants to come home: We will get you home," Biden said in an address at the White House Friday. The President also extended that promise to Afghan translators who risked their lives to help US troops and diplomats operate on the ground over the 20-year US presence in Afghanistan.

"There's no one more important than bringing American citizens out. I acknowledge that. But they're equally important, almost, as all those SIVs (Special Immigrant Visas) we call them, who in fact helped us. They were translators. They were in the battle with us. They were part of the operation," he added.

Biden laced his assurances with a sober note of caution as reports continued to emerge of the Taliban beating and threatening people, including Americans, trying to make their way to the airport.

"Make no mistake, this evacuation mission is dangerous, involves risks to Armed Forces, and has been conducted under difficult circumstances," Biden said. "I cannot promise what the final outcome will be, or ... that it will be without risk of loss. But as Commander in Chief, I can assure you that I will mobilize every resource necessary."

Biden suggested that mobilization could include military forays beyond the airport perimeter to collect Americans. The President said that in recent days, the US military had ventured outside the airport to collect 169 Americans in the crowd outside. He added that the White House is also considering "every opportunity" to rescue Americans and Afghans stuck behind Taliban checkpoints.

Asked specifically about that possibility, Biden said yes, adding: "We're considering every opportunity and every means by which we could get folks to the airport."

Shortly after Biden's remarks, US officials announced a raft of new countries that will now help transit Americans or temporarily host Afghans fleeing the Taliban and said the first evacuation flight out of Afghanistan had arrived at Ramstein Air Base in Germany with about 350 people on board.

"Bahrain, Denmark, Germany, Italy, Kazakhstan, Kuwait, Qatar, Tajikistan, Turkey, the UAE, the United Kingdom, and Uzbekistan have been or will soon be transiting Americans or in some circumstances, others, through their territories to safety," State Department spokesman Ned Price said Friday.

Price said other locations would be coming online in the coming days, "which will allow us to make sure that we're able to maximize that flow because again ... the metric and the only metric we care about is how many people we are able to relocate, to bring to safety, whether that is Americans that we're repatriating to the United States, whether it is third country nationals, whose relocation we're facilitating to their home countries, or whether it is to at risk Afghans."

Special Immigrant Visa applicants will be brought to the US, Price added. "In some cases, we have heard these very generous offers of support from partners, from allies around the world who will be willing to host at risk Afghans as they undergo that process," he said.

The President sought to reassure the country as the disarray of the evacuation effort spread beyond Afghanistan and prompted an urgent drive to give American military pilots lifting off from Kabul new destinations to bring people to safety.

By Friday afternoon, Gen. Hank Taylor, deputy director of the Joint Staff for Regional Operations told reporters that flight operations had resumed after a pause of about "six to seven hours" while the US military adjusted "resources and personnel" to address what he called a temporary capacity issue at the US military base in Qatar.

As US officials hunted for new locations to land planes from Afghanistan, around 10,000 people at the Kabul airport who had been processed for departure were unable to fly out because of the backlog in Qatar.

Pentagon spokesman John Kirby said that Qatar had been "the first waystation for the evacuation flights that we've been conducting, and because we've been doing it so consistently, that's one of the reasons we reached capacity there as quickly as we did. We are grateful for other countries who have already agreed to accept additional numbers."

Taylor confirmed to reporters at the Pentagon that the US will relocate Afghans to Ramstein Air Base in Germany. Shortly after, the US military posted a photo online of Air Force airmen setting up thin green cots at a hangar on the base.

"
Operation Allies Refuge is facilitating the quick, safe evacuation of US citizens, Special Immigrant Visa applicants and other at-risk Afghans from Afghanistan," the post said. "Qualified evacuees will receive support, such as temporary lodging, food, medical screening and treatment and more at Ramstein Air Base while preparing for onward movements to their final destinations."

Homeland Security personnel are expected to go to Germany to assist with processing of SIV applicants and Afghan allies, according to two DHS officials.

Since the end of July, the Department of Defense has moved more than 18,000 people out of Afghanistan. 13,000 of the total 18,000 that have been evacuated have been moved out of the country since August 14, said Taylor, who added that there are now 5,800 US troops on the ground in Kabul.

Military and diplomatic efforts are underway to press the Taliban to ensure safe passage for those still trying to reach the airport, but for now the route there is fraught with uncertainty for Afghans looking to flee, as they must first make their way through often violent and arbitrary Taliban checks.

Biden said in his remarks at the White House that his administration is in "constant contact with the Taliban," and that most of the engagements were focused on getting Americans out who want to leave out of the country.

But the US Embassy in Kabul has advised Americans that it "cannot ensure safe passage to the airport," and Defense and State Department officials have said they do not have the capacity to retrieve US citizens from Kabul and bring them to the airport for evacuation flights.

Those who are able to reach the airport perimeter have reported waiting hours to enter. The US Embassy advised in a recent security alert that "due to large crowds and security concerns, gates may open or close without notice" and urged people to "please use your best judgment and attempt to enter the airport at any gate that is open."

Those who are able to make it onto US government evacuation flights will not be required to pay for them, the State Department confirmed Friday. "In thbese unique circumstances, we have no intention of seeking any reimbursement from those fleeing Afghanistan," spokesperson Price said in a statement.

On Thursday, Price said that the US had "notified all Americans who had expressed an interest in being relocated to consider traveling to the airport," as well as the embassy's locally employed staff and "a segment of the SIV population."

White House communications director Kate Bedingfield told CNN's Brianna Keilar on Friday that the White House does not have a precise count of Americans who are still in Afghanistan. She said the administration is still trying to account for Americans who may have left the country prior to Aug. 14 without notifying the US embassy.