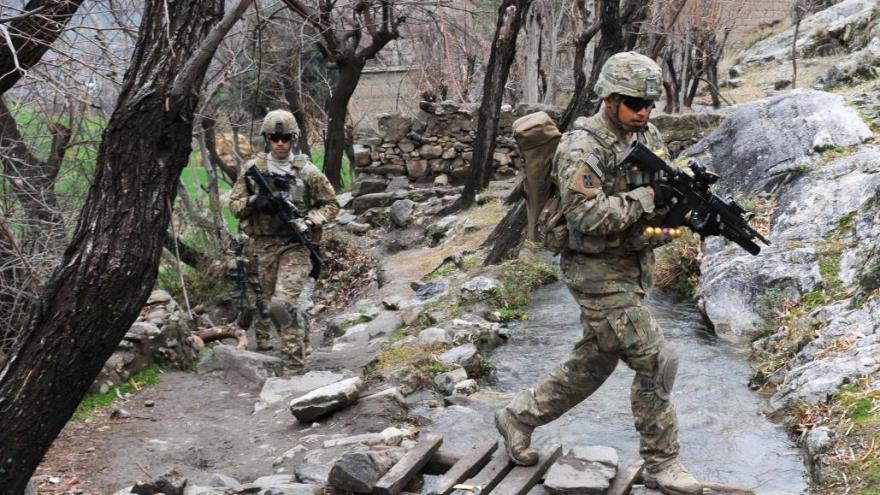 (CNN) -- Acting Secretary of Defense Christopher Miller announced Tuesday that the US will withdraw thousands more US troops from Afghanistan and Iraq by January 15, 2021 -- just days before President-elect Joe Biden takes office, confirming plans first reported by CNN on Monday.

Miller said the withdrawal, which will leave approximately 2,500 troops in Afghanistan and roughly the same number in Iraq, "does not equate change" to US policies or objectives but provided no details about the plan and refused to answer questions following Tuesday's appearance in the Pentagon briefing room.

Currently there are approximately 4,500 US troops in Afghanistan and 3,000 troops in Iraq.

National security adviser Robert O'Brien discussed the drawdown from the White House driveway shortly after the Pentagon announcement, but like Miller he did not take any questions from journalists about the decision.

"Moments ago, acting Secretary of Defense Miller announced major troop reductions in Afghanistan and in Iraq. Effective January 15, 2021, American troops in both countries will go to 2,500 personnel. Those troops will defend our embassies and the other agencies of the US government doing important work in those countries. They'll enable our American allies in their important missions in those countries. They'll defend our diplomats and they'll deter our foes," O'Brien told reporters.

"By May, it is President Trump's hope that they will all come home safely, and in their entirety," he added, though by that time, troop decisions will be made by Biden, who will become commander in chief in January.

A senior defense official said Tuesday's announcement is "consistent" with what Trump publicly announced earlier this year and is "consistent with his promise to the American People."

But the move suggests that Trump may fall short of fulfilling one of his core promises, to withdraw all US troops from Afghanistan before he leaves office -- something he pledged as recently as October, when he tweeted: "We should have the small remaining number of our BRAVE Men and Women serving in Afghanistan home by Christmas!"

Still, the Trump administration's decision to withdraw thousands of troops from Afghanistan and Iraq has fueled speculation that the President could move to reduce the number of US forces in other countries as well.

To that end, two defense officials told CNN that the administration plans to maintain 900 troops in Syria but could issue an order to withdraw more than 500 troops from Somalia in the near future.

The panel's chairman, Democratic Rep. Adam Smith of Washington state, said in a statement that he believes the troop reduction "is the right policy move," breaking with the ranking Republican, Rep. Mac Thornberry of Texas, who slammed the decision as "a mistake."

"After speaking with the Acting Secretary this morning, I believe reducing our forward deployed footprint in Afghanistan down to 2,500 troops is the right policy decision. At the same time, this reduction must be responsibly and carefully executed to ensure stability in the region," Smith said in his statement.

"Our primary goal has been, and continues to be, the prevention of transnational terrorists from launching an attack against the United States from Afghanistan. In order to contain the terrorist threat as we draw down our troop levels, it is critical that we coordinate the drawdown closely with our allies, as well as our partners in the Afghan government, to protect our interests and those of our allies in Afghanistan," he added.

Meanwhile, Thornberry said he believes "these additional reductions of American troops from terrorist areas are a mistake."

"Further reductions in Afghanistan will also undercut negotiations there; the Taliban has done nothing -- met no condition -- that would justify this cut," he said. "As long as there are threats to Americans and American national security in the world, the U.S. must be vigilant, strong, and engaged in order to safeguard our people and fulfill our duty under the Constitution."

Miller's announcement comes a day after CNN reported US military commanders were anticipating that Trump would give a formal order to begin a further withdrawal of US troops from both countries.

The news prompted criticism from several GOP lawmakers, including Senate Majority Leader Mitch McConnell, who did not refer to Trump by name but voiced his clear opposition to a rapid withdrawal of US forces from Afghanistan, saying it would "hurt our allies."

"We're playing a limited -- limited -- but important role in defending American national security and American interests against terrorists who would like nothing more than for the most powerful force for good in the world to simply pick up our ball and go home," the Kentucky Republican said in a speech from the Senate floor on Monday.

"There's no American who does not wish the war in Afghanistan against terrorists and their enablers had already been conclusively won," he said. "But that does not change the actual choice before us now. A rapid withdrawal of US forces from Afghanistan now would hurt our allies and delight -- delight -- the people who wish us harm."

On the Senate side, Armed Services Chairman Jim Inhofe, an Oklahoma Republican, issued a statement of tempered support following the formal announcement, saying he has been reassured by Miller and O'Brien "that they are consulting with our allies, and that, with their plan, we will be able to carry out our mission of protecting the American people from terrorist attacks originating in Afghanistan, safeguarding Afghan gains and supporting our partners and allies."

However, the top Democrat on the Senate committee, Jack Reed of Rhode Island, criticized the announcement.

"There's a right way and a wrong way to do this. President Trump is once again choosing the wrong way, and we can't let US national security and our relationships with steadfast partners become a casualty of President Trump's wounded ego," he said.

"Instead of heeding the advice of national security professionals and working with our allies, President Trump is venting his frustration over losing the election in a manner that is more costly, jeopardizes our military personnel, aids the Taliban and terrorist networks, and emboldens those who want greater conflict with Iran," Reed added.

A series of sweeping changes at the Pentagon last week that started with the firing of Defense Secretary of Mark Esper saw Trump loyalists installed in influential positions. Knowledgeable sources told CNN's Jake Tapper last week that the White House-directed purge at the Defense Department may have been motivated by the fact that Esper and his team were pushing back on a premature withdrawal from Afghanistan, which would be carried out before the required conditions on the ground were met.

The senior defense official claimed that "there is no reduction in capability" as a result of the drawdown, calling the reduction a "collaborative" decision while refusing to address a recent Pentagon memo that said conditions on the ground in Afghanistan did not warrant additional drawdowns.

Prior to his firing, Esper sent a classified memo to the White House asserting that it was the unanimous recommendation of the chain of command that the US not draw down its troop presence in Afghanistan any further until conditions were met, sources familiar with the memo tell CNN.

The assessment from the chain of command -- Esper, US Central Command leader Marine Gen. Kenneth "Frank" McKenzie and commander of NATO's mission in Afghanistan Gen. Austin Miller -- stated that the necessary conditions had not been met. Others agreed, sources have told CNN.

Earlier on Tuesday, a newly released report from the Pentagon inspector general said the terrorist group al Qaeda is supportive of the Trump administration's plans to withdraw troops from Afghanistan as well the US agreement with the Taliban, adding that the Taliban carried out attacks on US and coalition personnel since it was signed.

"The DIA reported that al-Qaeda leaders support the agreement because it does not require the Taliban to publicly renounce al-Qaeda and the deal includes a timeline for the United States and coalition forces to withdraw—accomplishing one of al-Qaeda's main goals," the report said, referring to the Pentagon's Defense Intelligence Agency.

This story has been updated with reaction to the announcement.