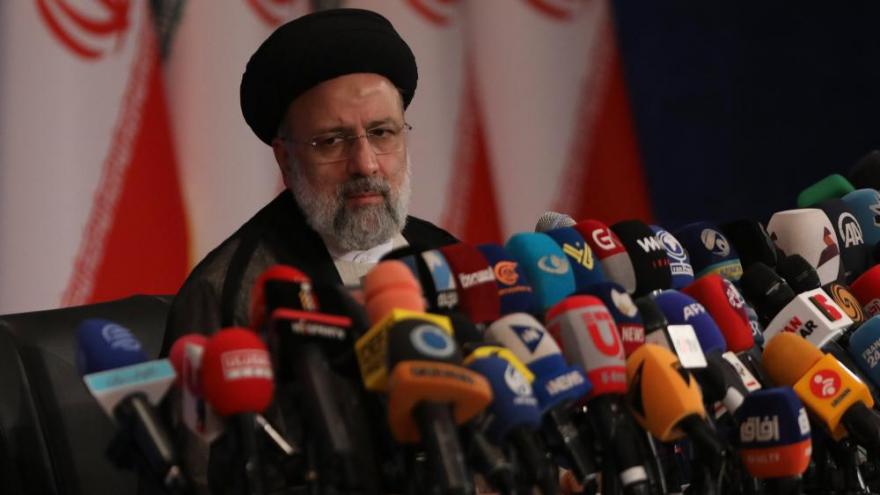 Raisi said he would not would not meet with Biden, even if both sides agreed on terms to revive the 2015 nuclear deal.

(CNN) -- President Joe Biden's decision to conduct airstrikes against Iran-backed militia groups on the Iraq-Syria border Sunday night follows a recent spate of attacks against US military assets in Iraq by a new class of Iranian-made drones that US officials say can evade US surveillance and defenses.

The latest of these attacks occurred earlier this month when an armed drone detonated at a dining facility at a key entry point in the Baghdad airport used by American soldiers and diplomats, a US military official told CNN. In April, a drone damaged a CIA drone hanger near Erbil.

The American airstrikes Sunday night hit operational and weapons storage facilities at two locations in Syria and one in Iraq, according to the Pentagon, targets that were "selected because these facilities are utilized by Iran-backed militias that are engaged in unmanned aerial vehicle (UAV) attacks against U.S. personnel and facilities in Iraq."

The strikes were initially contemplated after the April attack in Erbil, according to one source briefed on the decision, but were put on hold until this weekend, when another attack by four of the more precise Iranian drones hit the northern Iraqi city -- including one that landed near the building site for a new US consulate. There were no Americans killed or injured in the strike.

For months, US intelligence and military personnel in Iraq have been raising alarms about the risk to American forces from these newer, more sophisticated Iranian-made drones. Rather than being guided by a pilot from a remote location, some of these small, fixed-wing drones use GPS navigation, making them far less visible to US surveillance systems and impervious to jamming.

"Suffice it to say the (CIA) is now paying a great deal of attention to this issue, because those things tend to wake you up a little bit," said one former intelligence official with experience in the region.

While rocket attacks against US personnel in Iraq have become almost routine, these new Iranian-made drones, so-called suicide drones, are viewed by US intelligence and military personnel as a clear escalation by Iran — and a worrying signal to intelligence officials that the US no longer enjoys autonomy in the skies over Iraq.

Packed with explosives, the new drones come in varying sizes -- anywhere from a five-foot wingspan to a 12 to 15 feet, according to one US military official -- with the larger iterations carrying up to 30 kilograms of explosives.

That's far smaller and less lethal than the American-made MQ-9 Reaper drones. But current and former officials say these new Iranian-made drones pose a unique threat in part because Tehran has no deniability -- since no one else is known to have the technology. Unlike the more commonly-available Katyusha rockets often fired at US troops in Iraq, US officials say there's no question that Iran is providing them to the complex web of militia groups who seek to oust the United States from Iraq.

They are also substantially more dangerous, these sources say.

"Someone could get killed, and more so than in the past, because things are accurate," said one US military official who spoke to CNN on the condition of anonymity. "We think they're actually aiming them -- and the warheads on these things are pretty substantial."

Critical for officials tracking the threat from these new drones is that many use GPS to find their target, making them much harder to defend against.

"What we used to do in the past is try to jam the link between the person flying it and the aircraft or take it over," the former intelligence official told CNN. "That is still what we try to do, but ... now they just send it to a GPS. There's no link, there's nothing to jam, there's nothing to take over."

It also "makes them less visible," that person said. "If they're talking to somebody then they emit something, it's easier for us to find. It allows us to take it back to the point of origin."

These smaller drones are also "increasingly used by enemy forces for intelligence-gathering on US and allied bases," a spokesman for the US mission in Iraq confirmed to CNN.

The rising attacks using these more sophisticated drones is part of an ongoing effort by Iran to use proxy militias in Iraq to try to oust the United States from the region, sources tell CNN. Complicating matters, they also come as the Biden administration is pursuing delicate negotiations with Tehran over a new nuclear deal.

The strikes also come just over a week after Iran elected a new hardline president, Ebrahim Raisi. Last week, Raisi said he would not would not meet with Biden, even if both sides agreed on terms to revive the 2015 nuclear deal under which Iran agreed to stop uranium enrichment in return for the lifting of crippling US sanctions.

Sunday's strikes are the second time Biden has chosen to use force in the region. In February, he launched airstrikes in eastern Syria against buildings that he said were used by Iranian-backed militia groups to launch attacks on US forces in Iraq.

Military officials have raised concerns about the proliferation of drones in the region for more than a year, in particular after they were used in the attack on a Saudi oil refinery in 2019. Multiple suicide drone strikes on Riyadh launched by Iranian-supplied Houthi fighters have also raised concerns.

Unlike a rocket, which must be launched from nearby the target, the drones can fly a much farther range and can be launched from anywhere. Smaller ones can simply be dropped off of a roof. The larger ones can take flight from the back of a pick-up truck, according to sources familiar with the technology.

Gen. Frank McKenzie, the top US general in the Middle East, earlier this year said "drones are the biggest threat to US forces in the region."

Then, in April, one of these drones damaged a CIA hangar in Erbil. Although officials don't necessarily believe the perpetrators knew the hanger belonged to the agency -- hangars are high-value targets no matter which government agency owns them -- the attack was still an unnerving escalation.

These drones have been used in at least five attacks since April, although in some cases, the drone has hit short of its target or been shot down by US defenses. At least some military officials have been pushing for the US to respond to the attacks.

"We don't have definitive evidence to say, it's that Iran is saying, 'do this' or 'don't do this,'" the US military official said, adding that there is "a growing belief" that some of the attacks are carried out by "rogue elements" without Iranian direction or permission.

"But who provided the weapon systems, who provided the training -- absolutely none of that is in doubt," this person said. There is "zero doubt" the technology comes from Iran.
This story has been updated with more reporting about the US decision to conduct airstrikes on Sunday night.