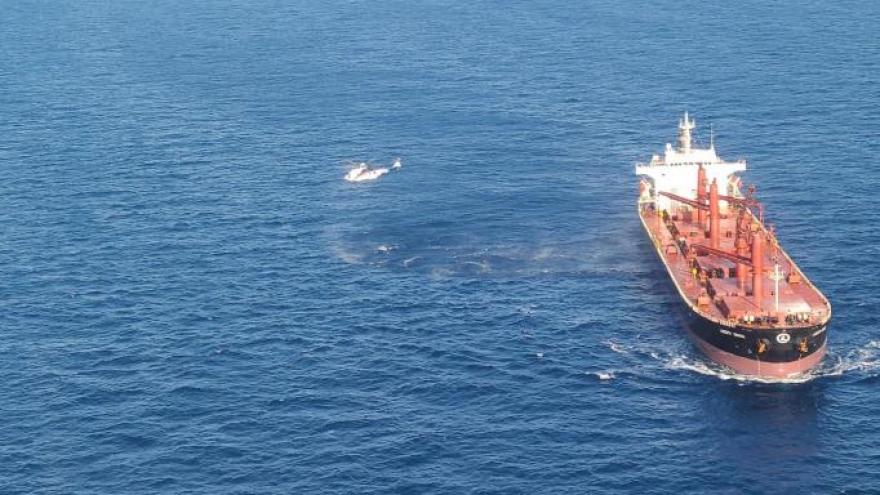 A US Air Force team based in Africa rescued a British citizen who had suffered a heart attack on board an American cargo ship in the Indian Ocean this weekend, according to the US military. A Super Puma helicopter assigned to Combined Joint Task Force - Horn of Africa Personnel Recovery Task Force hovers near US flagged cargo ship Liberty Grace during a complex, two-day medical evacuation from the Indian Ocean.

(CNN) -- A US Air Force team based in Africa rescued a British citizen who had suffered a heart attack on board an American cargo ship in the Indian Ocean this weekend, according to the US military.

The Warfighting Recovery Network received an "urgent request" on Saturday for a mariner "experiencing symptoms of a heart attack," on a US flagged cargo ship in the Indian Ocean, about 500 nautical miles off the coast of Kenya, a press release from US Africa Command said.

After the urgent call came in, a team of five US Air Force pararescuemen were deployed. They flew an aircraft to reach the man on the ship in the middle of the ocean. Once they reached the cargo ship, they rappelled down to the ship and stabilized him.

The pararescumen stayed on board the ship overnight Saturday to keep the man stable as the cargo ship moved closer to the Africa shoreline. The ship transited within 150 nautical miles of Manda Bay Airfield in Kenya overnight.

Once it was closer to the shore, two helicopter aircrafts, called Super Pumas, flew the man and the pararescuemen to Manda Bay Airfield in Kenya. After they made it to the airfield, a separate aircraft, a DHC-8 airplane, transported the man to a hospital in Nairobi.

"The patient is doing well, and I am so proud of my team for their part," US Air Force Master Sgt. Trevor Clark, 82nd Expeditionary Rescue Squadron pararescueman said in a statement.

US Major General Gregory Anderson, US Africa Command Director of Operations, said the distance in Africa can make rescue operations like this difficult, but that is why the Warfighter Recovery Network works together to help in these situations.

"The tyranny of distance in Africa cannot be overstated, especially during life-threatening MEDEVAC situations," Anderson said in a statement. "While the primary mission of Warfighter Recover Network is to rescue our military personnel during operations in Africa its robustness allows for unique missions like this. We are all grateful for the pilots, crews, medics, and rescue professionals and the courage they demonstrate to help anyone under duress."