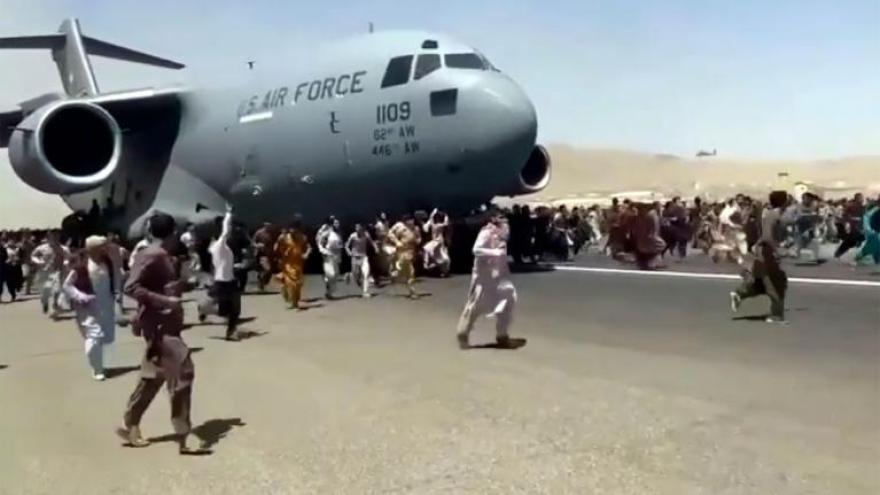 The US Air Force has concluded that an aircraft crew operating out of Kabul's airport in Afghanistan during the chaotic evacuation of American forces acted appropriately in departing the airport.

(CNN) -- The US Air Force has concluded that a C-17 aircraft crew operating out of Kabul's airport in Afghanistan during the chaotic evacuation of American forces acted appropriately in departing the airport even though human remains were discovered in the wheel well when the plane landed in Qatar.

The review found that, given the circumstances at Hamid Karzai International Airport on August 16, 2021, where pilots were trying to operate amid the chaos, the crew acted appropriately, the US Air Force said in a statement released Monday. They also said the crew used sound judgment "in their decision to get airborne as quickly as possible when faced with an unprecedented and rapidly deteriorating security situation."

CNN previously reported that the US Air Force Office of Special Investigations opened an investigation and that the crew made the decision to take off because of the deteriorating security situation at the airport after hundreds of Afghans breached the perimeter and surrounded the C-17.

"The aircrew's airmanship and quick thinking ensured the safety of the crew and their aircraft. After seeking appropriate care and services to help cope with any trauma from this unprecedented experience, the crew returned to flight status," the US Air Force also said Monday.

Thousands of Afghans were desperate to leave the country in the face of the Taliban takeover after the group took control of Kabul one day earlier. Civilians rushed the airport's tarmac and video at the time showed civilians clinging to military transport planes as they took off.

The Biden administration has come under intense scrutiny over the handling of withdrawal of US forces from Afghanistan and questions linger over why evacuation efforts were not started sooner as the Taliban gained more territory across the country. President Joe Biden defended his decision to withdraw US forces from the country and called the withdrawal an "extraordinary success."