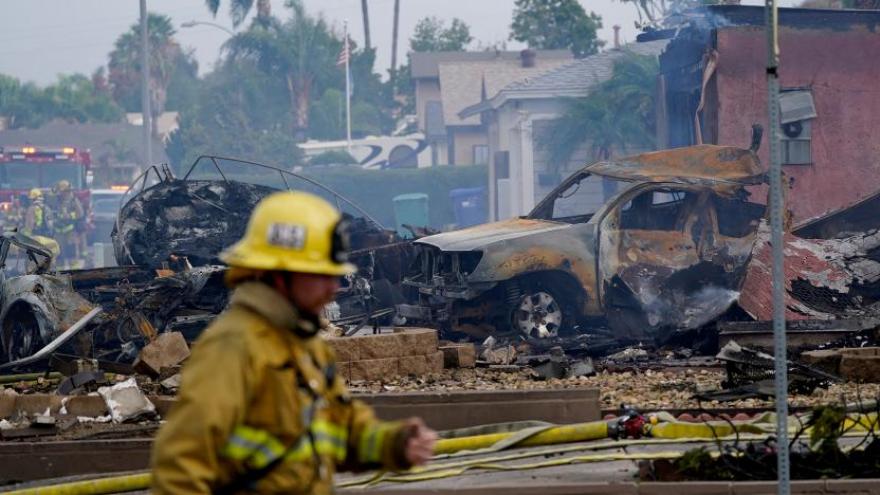 At least two people died when a twin-engine Cessna crashed in a Southern California neighborhood on Monday afternoon, officials said.

"We do have multiple confirmed fatalities, we do not know exactly how many," said Justin Matsushita, deputy fire chief for the city of Santee, in a briefing for reporters. "We do know there are at least two confirmed."

According to a statement from UPS, an employee was killed.

"We are heartbroken by the loss of our employee, and extend our deepest condolences to his family and friends," UPS said. "We also send our condolences for the other individuals who are involved in this incident, and their families and friends."

Matsushita said emergency responders are searching for casualties as they determine the extent of damage to homes.

"Not to be too graphic, but it's a pretty brutal scene for our guys, and we're trying to comb through it," he said.

Two homes in the San Diego County neighborhood took the brunt of the plane's impact and two or three more were damaged.

It is unclear how many people were aboard the Cessna 340A. "We believe that the injuries are not survivable for anyone that was on board," Matsushita said.

Several vehicles were on fire when emergency crews arrived on scene, officials said. Debris is strewn across a residential block, and the power has been turned off for about 10 homes in the area as investigators evaluate the damage.

The San Diego County Fire Department and sheriff's department responded to the crash, which occurred near a high school. Santana High School tweeted that all students are secure and the incident happened a few blocks away.

The San Diego County Sheriff's Department warned residents to stay away from the area.

The Red Cross has set up a temporary shelter for neighborhood residents who have been displaced.

The FAA said it will release the tail number of the aircraft after investigators verify it at the crash site.

"The FAA and National Transportation Safety Board will investigate. The NTSB will be in charge of the investigation and will provide additional updates. Neither agency identifies people involved in aircraft accidents."

Santee is about 20 miles east of San Diego.