38 confirmed killed, up to 20 still missing in Italian bridge collapse 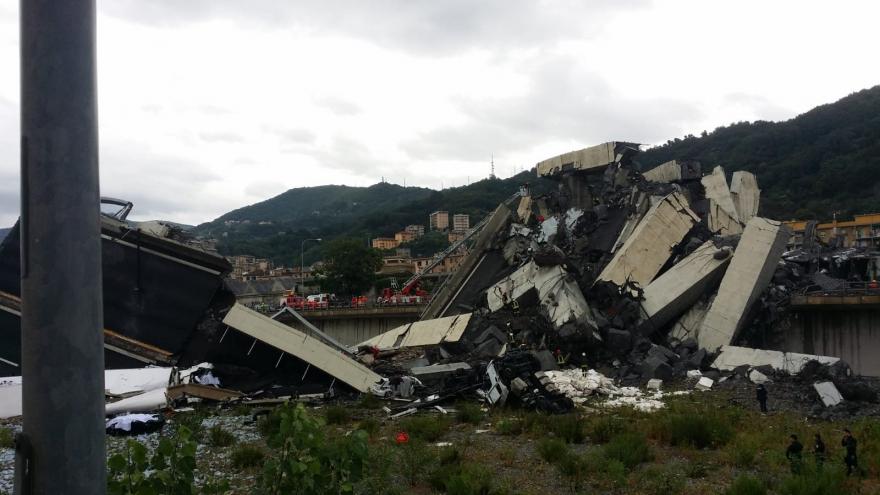 GENOA, Italy (AP) — Excavators began clearing large sections of the collapsed highway bridge in the Italian city of Genoa on Friday, searching for people still missing three days after the deadly accident that one survivor said ended with an "unreal silence."

The search entered a new phase as heavy equipment removed a large vertical section, clearing a new area to probe. Rescuers have been tunneling through tons of jagged steel, concrete and crushed vehicles that plunged as many as 45 meters (150 feet) when the bridge suddenly fell during a downpour on Tuesday.

Officials say 38 people are confirmed killed and 15 injured. Prosecutors say 10 to 20 people might be unaccounted-for and the death toll is expected to rise.

The first funerals were being held later Friday, ahead of a state funeral in Genoa on Saturday to be celebrated by Cardinal Angelo Bagnasco.

The collapse occurred about midday Tuesday, the eve of Italy's biggest summer holiday, when traffic was particularly busy on the 51-year-old span that links two highways — one leading to France, the other to Milan — from this northwestern port city.

One survivor, whose car plunged from the bridge to the bottom along with falling sections of highway, told the Associated Press how as a trained firefighter he immediately understood that the structure had collapsed when the road dropped out from under him.

"It came down. everything, the world, came down," said 33-year-old Davide Capello, who may be the only person to have fallen from the bridge and walk away unharmed. He had been at the midpoint of the bridge, driving across toward Genoa when it collapsed.

"I heard a noise, a dull noise. I saw the columns of the highway in front of me come down. A car in front of me disappeared into the darkness." His car plunged nose first, then suddenly stopped with a crash, air bags releasing around him. He said he saw only gray. Outside, he said, "there was an unreal silence."

Capello was released from the hospital Thursday, two days after the collapse. He said had no major physical injuries.

As the cleanup crews went about their work, authorities were worried about the stability large remaining sections of the bridge, prompting a wider evacuation order and forcing about 630 people from nearby apartments, some practically in the shadow of the elevated highway. Firefighters went inside some of the vacated apartments briefly to retrieve documents and, in at least one home, pet cats.

Officials are also urging the quick removal of tons of debris from the dry river bed the bridge had spanned so that the rubble doesn't create a makeshift dam if heavy rains fall in the flood-prone city on the Mediterranean. Debris also must be cleared from railroad tracks, a vital link especially now that Genoa is largely cut in half by the loss of such a key artery.

This story has been corrected to give the confirmed death toll as 38.