Up to 16-foot waves forecast near Chicago 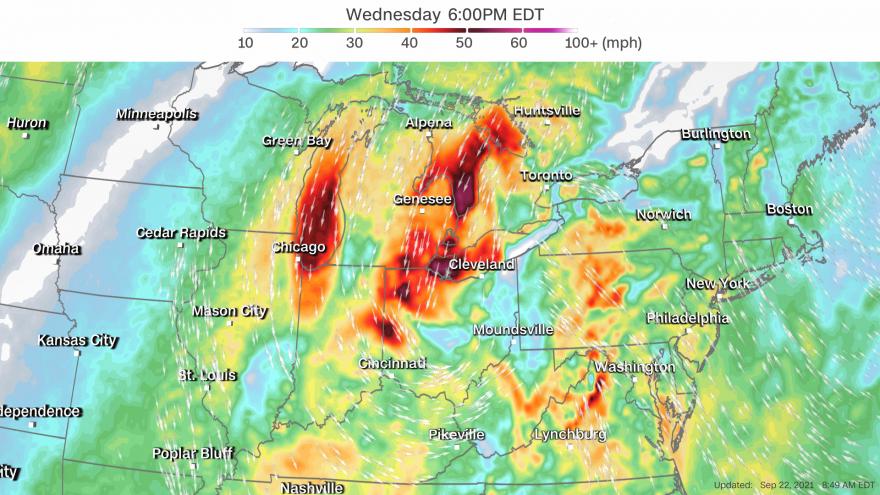 (CNN) -- Cooler weather is landing right on cue for the first day of Autumn. But first, the system delivering the cooler temps will soak the eastern third of the country, bring strong winds and 10 to 18-foot waves on some of the Great Lakes.

A strong storm system is forecast to develop Wednesday and strengthen into Thursday across the Midwest. Winds will begin to howl in parts of Illinois, Michigan, and Ohio.

Winds gusting to 50 mph could generate towering wave heights of 10 to 15 feet in the southwest parts of Lake Erie and Lake Huron.

On the southwest shores of Lake Michigan, 40 mph gusts near Chicago could generate waves as high as 16 feet through Thursday morning, according to the National Weather Service in Chicago.

"These large waves combined with above-average lake levels will result in beach erosion, extremely dangerous conditions at the lakefront, as well as minor lakeshore flooding," the Weather Service says.

Even larger waves up to 18 feet are possible along southern Lake Michigan near Indiana.

A lakeshore flood advisory has been issued until 10:00 a.m. CDT on Thursday.

In addition, there is the possibility of damaging severe thunderstorm winds and a few tornadoes over parts of Ohio, West Virginia and western Pennsylvania Wednesday.

A cold front — the division between warmer and cooler air — which spans over a thousand miles from the shores of the Great Lakes downs to the Gulf of Mexico will interact with a massive area of high pressure along the eastern seaboard, funneling in moisture to fuel the storm, forecast to soak millions from Wednesday to Friday.

The Weather Prediction Center has issued a moderate risk for excessive rainfall on Wednesday, the second-highest alert level, for parts of the Great Lakes region into the Ohio Valley.

From Columbus to Cleveland and Detroit to Pittsburgh, widespread moderate to heavy rains are expected Wednesday into Thursday. Periods of heavy storms may produce rainfall rates as high as 1 to 2 inches per hour, with totals reaching 2 to 4 inches across the region. In areas where strong thunderstorms develop, isolated totals may exceed 6 inches or more. Flood alerts have been prompted for nearly 25 million Americans in the region Wednesday.

As the front slowly shifts to the east Thursday, cities such as New York, Philadelphia and Washington, DC will begin to feel the impacts of the incoming storm on the first full day of fall.

For the Northeast, Autumn is forecast to start much like much of the summer months in the region, warm, humid, and wet. Showers on Thursday morning will give way to heavier rain on Thursday night in some of the major metro cities of the Northeast. New York and Philadelphia could see as much as 1 to 2 inches of rainfall from Thursday into Friday, with higher amounts possible in thunderstorms.

The rich moisture will be accompanied by warm tropical air ahead of the cold front, as low temperatures on Thursday morning are forecast to fall to only 70 degrees in Central Park, just 6 degrees shy of its average high temperature for the day.

Check the forecast to see when Autumn temperatures settle in

August didn't fare much better as Tropical Storm Henri landfall in Rhode Island, soaking the region with as much as 9 inches of rainfall late in the month. Just 11 days later, remnants of Hurricane Ida ushered in historic rainfall across the Northeast, setting both hourly and daily record rainfall totals in Central Park and Newark as the storm ravaged the area.