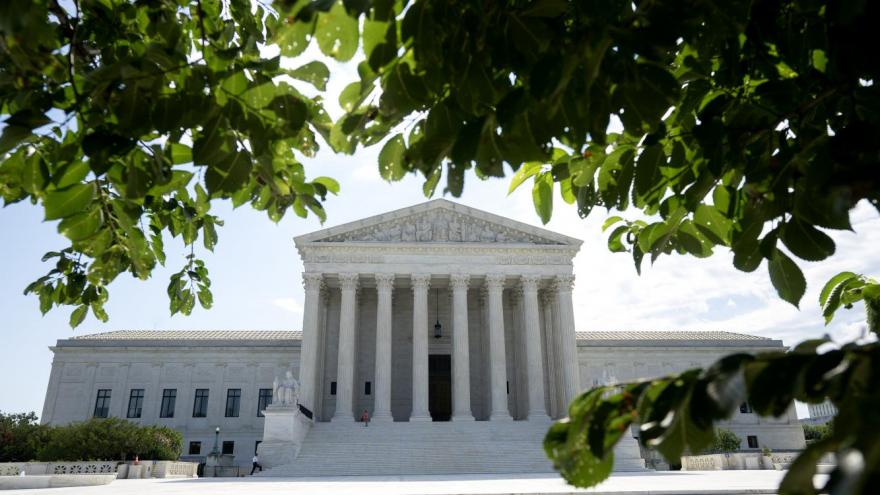 A general view of the U.S. Supreme Court on June 30, 2020 in Washington, DC. The court is expected to release a ruling determining whether President Trump can block the release of his financial records.

(CNN) -- After a frenetic few weeks, the Supreme Court gaveled out Thursday, bringing to a close an unprecedented term that defied expectations and shifted perceptions of the court in the heat of an election year.

The justices delivered some surprising wins to liberals -- and infuriated conservatives who wanted and expected much more than they got. President Donald Trump bemoaned his fate at times, but got a mixed bag in two cases concerning his bid to shield his financial documents. The court blocked House subpoenas in one case, but rejected Trump's broad claims of immunity in another.

Perhaps what will matter to Trump the most, however, is that it's unlikely any subpoenas will go out prior to the November election because the cases were returned to lower courts for more proceedings.

In the end, the court kept its head down and decided major issues concerning abortion, LGBTQ rights, the Obama-era Deferred Action for Child Arrivals program, religious liberty and executive power. Conservatives made strides forward, particularly in the area of religious liberty and the administrative state. But liberals got a clean win in a landmark case concerning LGBTQ rights and at least temporary wins on DACA and abortion.

"Conservatives should not despair about this term," said Mike Davis, who runs The Article III Project, which supports Trump's judicial nominees.

"Liberals may have made short-term gains through one-off mistakes or the chief justice's incrementalism in his decision-making but conservatives are no question winning the long game," he added.

For Chief Justice John Roberts, a conservative, that long game includes protecting the institution of the Supreme Court. By July, one thing was indisputably clear: the court distinguished itself from the other branches of government.

A functional branch of government in an era of dysfunction

The justices finished their work and kept their differences to well-reasoned opinions, while the political branches dissolved further into dysfunction. It may not be saying a lot, but for the chief justice -- an institutionalist -- it could be saying everything.

"A lot of folks are going to ask who won this term -- was it the Democrats, Republicans, the President or Congress?" asked CNN Supreme Court analyst Steve Vladeck.

"If nothing else is clear, this term was won by John Roberts, not only because the court went as he went so often, but because in the process, the court held itself out not as above politics but as not entirely beholden to them," Vladeck said.

From impeachment to pandemic

The term jolted to a start nine months ago after Ruth Bader Ginsburg, the rare justice with a cult-like following, announced she had completed treatment for a fourth bout of cancer.

In January, Roberts found himself crossing the street in the afternoons to preside over Senate impeachment hearings. And then a global pandemic hit, closing the court doors in mid-March and forcing the justices to hold oral arguments, for the first time ever, by telephone.

There were surprises in the opinions too.

In June, Neil Gorsuch -- Trump's first court appointee -- unexpectedly became a hero to the LGBTQ community. He penned a landmark opinion holding that a federal civil rights law that bars discrimination because of sex includes protections for LGBTQ workers.

The opinion was stunning enough for those who had worked for years in the trenches on the issue. But few would have thought that Gorsuch would have joined the liberals in the case. He was likely assigned the opinion by the chief justice, who also voted in the majority.

The ruling will change the lives of some 7 million gay and lesbian workers and 1 million transgender workers who now have protections under Title VII of the Civil Rights Act.

On the heels of that decision, Roberts defied conventional wisdom and joined the liberals, penning the opinion in a 5-4 decision that blocked the President from ending DACA, which protects from deportation of hundreds of thousands of immigrants brought to the US as children.

In his opinion, Roberts didn't question whether the Trump administration had the authority to end the program, only that it had failed to follow proper procedures. "We do not decide whether DACA or its rescission are sound policies," Roberts wrote. "'The wisdom of those decisions is none of our concern. We address only whether the agency complied with the procedural requirement that it provide a reasoned explanation for its action," Roberts wrote.

Trump immediately floated that he would issue a new memo to end DACA, following the court's guidelines, that would once again put the Dreamers in legal limbo.

And then, on June 29, Roberts, delivered a fifth vote to the liberals to strike down a controversial Louisiana abortion law. The opinion marked the first time the chief had voted against an abortion restriction.

It was a victory for the doctors and clinics who brought the case in Louisiana and preserved -- for now -- access to abortion in the state.

But in a concurring opinion, joined by no other justice, Roberts left open the possibility that other states could pass similar, restrictive laws. His opinion made clear that the fight on abortion will continue and that Roe v. Wade, the landmark opinion from 1973, would remain a political touchstone in presidential campaigns and judicial confirmation hearings for years to come.

"The chief justice followed precedent in ways that were less protective of abortion rights," Leah Litman, a professor at Michigan Law school, wrote for the Take Care blog.

"In particular, as in prior abortion cases, the Chief Justice gave abortion supporters a victory while at the same time laying the groundwork for much weaker protections for abortion rights," she said.

Conservatives were deeply frustrated by the term, given the fact that the conservative majority was bolstered with the addition of Trump's two nominees.

"Judging is not a game," Texas Sen. Ted Cruz said from the Senate floor after the DACA and abortion decisions came down. "But sadly, over recent years, more and more, Chief Justice Roberts has been playing games with the court to achieve the policy outcomes he desires."

Cruz and others expected the new court would take a hard right turn, expanding gun rights for example, and greenlighting state restrictions on abortion.

Although that did not occur, conservatives did make strides.

In a 5-4 opinion last month, the court opened the door to more public funding for religious education. The justices also cleared the way for the Trump Administration to expand exemptions for employers with religious or moral objections to complying with the Affordable Care Act's contraception mandate. It also reaffirmed that religious institutions and schools have a First Amendment right to select employees who perform significant religious functions.

Gorsuch and Brett Kavanaugh came through for conservatives voting to rein in the authority of the Consumer Financial Protection Bureau, an independent agency meant to serve as a consumer watchdog.

And although DACA will continue in the short run, in other cases, the court ruled in favor of the government in the area of immigration.

"When you focus on a small number of high-profile cases, it's easy to overlook the bulk of what the court is doing," said Jonathan H. Adler of Case Western Reserve University.

"In the mine-run of cases, this is a conservative court," he said and noted that many of the conservative complaints were grounded in "unrealistic assumptions about how quickly or dramatically the court is willing to change existing law."

That this is the Roberts Court is clear: In all, he was in the majority a stunning 97% of the time, according to Adam Feldman of Scotusblog. He was also in the majority in 11 of the 12 argued decisions that went down to a 5-4 vote.

For the near future, Roberts is in charge.