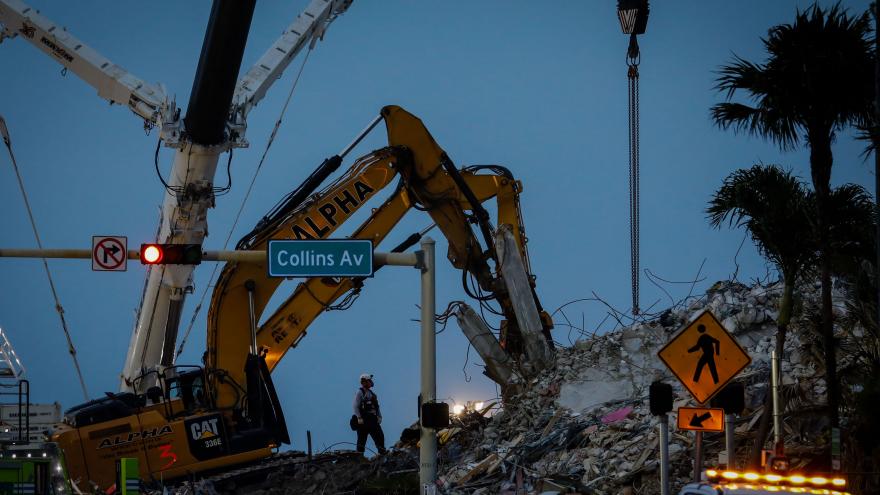 (CNN) -- Despite a tropical storm hitting the state, the search through the rubble for victims of a building collapse in Florida is continuing in full force -- with teams working through the inclement weather until they are mandated to stop.

Winds of up to 30 miles per hour were walloping search and rescue crews Tuesday as Tropical Storm Elsa traveled up the state, but the work of looking for those unaccounted for kept going, except when crews were mandated to pause for two hours because of lightning, Miami-Dade Mayor Daniella Levine Cava told reporters Tuesday.

And as long as wind gusts stay below 45 mph, search teams can continue looking for signs of life, according to Miami-Dade Fire Rescue spokesperson Erika Benitez.

With current weather conditions, wind in the area is unlikely to reach that speed, CNN meteorologist Michael Guy said.

Nearly two weeks after the middle of the night partial collapse of Champlain Towers South, 109 residents are still unaccounted for. In the search, 36 people have been confirmed dead, 29 of whom have been identified.

About 5 million pounds of debris have been removed from the site so far, said Miami Dade County Fire Chief Alan Cominsky.

Officials have said that despite the time that has passed, they remain hopeful they will still find survivors.

How to help Surfside Victims

Teams not finding anything positive, but still more space to search

The key to finding survivors, Cominsky said, is finding voids or livable spaces among the rubble.

"We're definitely searching," he said. "We're not coming across that."

But with the amount of ground to cover, there is no telling what the teams will find in the coming days, Cominsky said.

The site has been broken up into grids, none of which have been fully cleared yet. The way the building collapsed as well as the magnitude of it means that teams have been able to get further down on some areas than others so far, he said.

Teams continue to search "as aggressive as we can to see if we can assist with the families and locate individuals," he said.

Tuesday was a day of gratitude for one family, when the uncle of a 15-year-old called the man who pulled the boy from the rubble just after the collapse to thank him.

Nicholas Balboa told CNN on Tuesday that he heard 15-year-old Jonah Handler screaming under the rubble after the condo building collapsed. Balboa was not in the building but was standing nearby when it collapsed.

Balboa said Jonah's uncle told him Jonah was out of the hospital with only minor injuries.

Since the collapse, Balboa says he has replayed that moment in his mind many times, wondering what he could have done differently to save more people, he said.

Four additional bodies were recovered Tuesday, Levine Cava said. The victims of the collapse range in age from 4 to 92.

"Of course, we have to work around the rescue efforts," he said. "I think it would be very, very good for those families to again see the amazing efforts that are being expended on their behalf."

Meanwhile, more federal organizations are investigating why the building collapsed.

Mayor Levine Cava said the National Institute of Standards and Technology (NIST), the US Geological Survey and the National Science Foundation are sending staff.

All of the debris removed from the site is considered "evidentiary debris," Levine Cava said.

The remnants are being sorted on-site, and any objects that can be distinguished are put in certain bins and labeled as to their exact location, the mayor said.

The county has created a form for family members to document their belongings, which will be an active part of the investigation, Levine Cava said.

"The families are not reviewing what's come out of the site at this time, but we have photographs, they have their information, and as we move forward, we'll be attempting to do matching and releasing it to them as soon as we can, given the active investigation," she said.

Woman files a motion to retrieve a trapped pet

A judge on Tuesday commended an animal-rescue volunteer who had sought permission to save pets from the section of the complex that was demolished Sunday, but criticized a lawyer for not making it clear that she was not a resident of the building.

Although Judge Michael Hanzman on Sunday denied the motion of Stacey Karron, who sought to enter the building to retrieve a trapped pet, he wrote in a Tuesday order that he sympathized with her plight and respected her bravery.

"As a dog owner and animal lover, the Court recognizes that pets are considered by many to be 'family.' Ms. Karron was commendably willing to risk her safety (and life) to rescue her left behind 'family' member, and this Court respects the risk she was willing to assume," Hanzman wrote.

Hanzman said that by the time Karron filed her motion, the building was embedded with explosives, so any pet-rescue effort would have been too dangerous.

But after writing the order, Hanzman learned that Karron both did not live in the building and had no relationship with any of the pets in the building.

"The motion is phrased in a way to convey the impression that this was your client's animal," Hanzman told Karron's attorney Tuesday. "I expressed sympathy and empathy for her having lost her pet, and not once did you correct me ... I think that was something you should have done."

The attorney said that Karron had been in contact with the family of a woman who owned the specific pet mentioned in her motion.