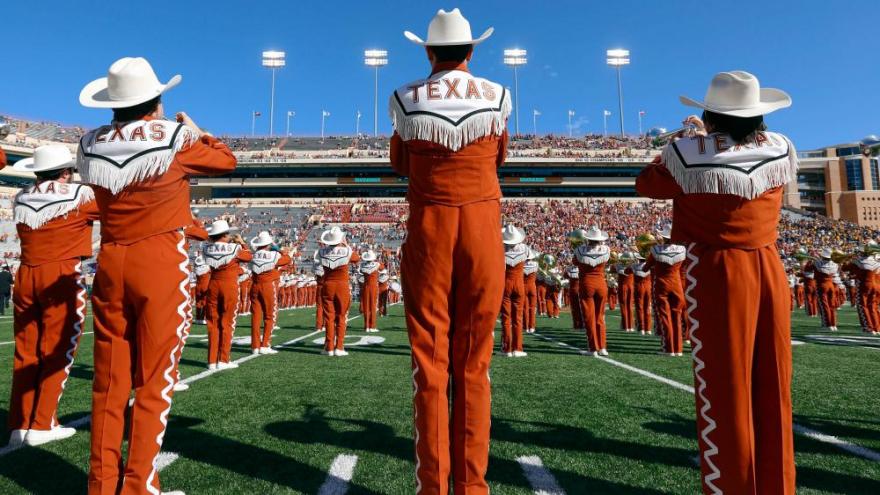 The University of Texas announces that it's Longhorn Band will be required to play "The Eyes of Texas" at football games and events.

(CNN) -- The University of Texas at Austin says that its Longhorn Band will be required to play "The Eyes of Texas" and that it will create a new marching band for students who are unwilling to play the school's alma mater.

The song has been a mainstay at football games and university events for generations, but critics have argued that it has a racist history because it was first performed at a 1903 minstrel show, a form of entertainment where white performers often wore blackface and presented negative stereotypes of Black people.

In a statement issued on Wednesday, the Butler School of Music announced that "The Eyes of Texas" will be part of the required repertoire for the marching band and the Longhorn Pep Band that plays at basketball and volleyball games and other events.

"We need to celebrate and nurture what makes UT special, and the Longhorn Band is one of those great organizations that shape our campus culture, elevate school spirit and provide amazing opportunities for our students," said University of Texas at Austin President Jay Hartzell, who approved the plan. "Our multi-million-dollar commitment over the next five years will support the Longhorn Band in restoring -- and even going beyond -- its former glory, while also providing strong support for our entire portfolio of university bands."

The school said that it would create a separate, yet-to-be-named university marching band in fall 2022 that will not be required to perform the song.

Senior band members who do not want to play the song this year will not lose the scholarships they earn for being in the Longhorn Band.

In October, some band members reportedly refused to play the song at a football game because of its origins and concerns that the lyric "The eyes of Texas are upon you" was a play on an expression used by former Confederate Gen. Robert E. Lee.

The school played a recording of the song at the game and Hartzell said in a statement that the band was never intended to play at the game.

Hartzell established a 25-person commission to study the history of the song.

In a 58-page report issued last month, the commission confirmed that the song was first performed at the minstrel show -- likely by white performers in blackface -- but concluded that the song's history was complex.

It said the song, which is sung to the tune of "I've Been Working on the Railroad" was written as a parody to poke fun at then UT President William Prather, who liked it so much it was played at his funeral.

The panel said it found no evidence of a connection to Lee and that the lyrics did not allude to slavery.

It wrote that even though the song "debuted in a racist setting," the preponderance of research showed that it "had no racist intent."

The University said that the school's other bands would have opportunities to perform at athletic events and could perform with the Longhorn Band at certain events.

The statement said the university plans to reduce fees, increase the amount of available scholarships, and take steps to increase diversity in the program's faculty and students.