University of Georgia fans staged a 'pink out' for opponent Arkansas State, whose coach's wife just died of cancer 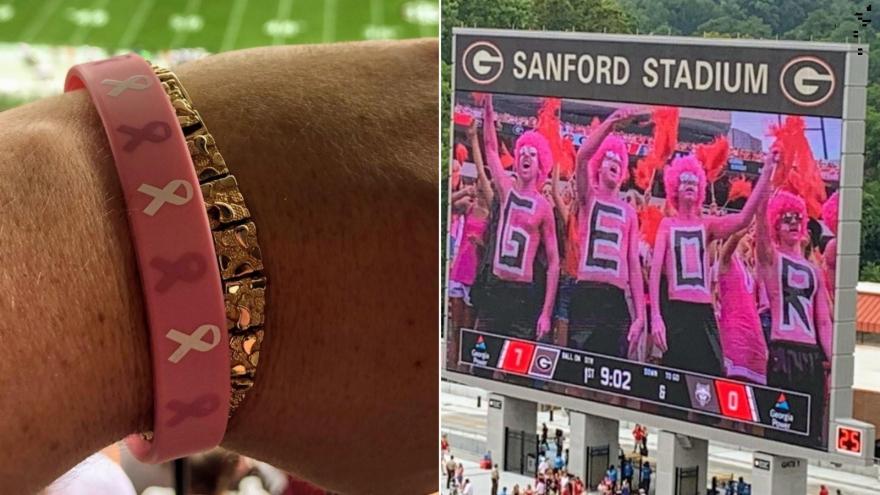 Red is normally the dominant color for University of Georgia fans, but pink carried the day Saturday.

(CNN) -- When University of Georgia football fans paraded into Sanford Stadium on Saturday, many had swapped out traditional red Georgia shirts for bright pink.

They were staging a "pink out" of the stadium in honor of Wendy Anderson, the wife of Arkansas State coach Blake Anderson.

She died August 19 from breast cancer, according to the Arkansas Democrat-Gazette.

Dwight Standridge, a UGA alum. tweeted out a rallying cry to Bulldog fans on Tuesday, calling for them to wear pink to the game.

"DawgNation let's get behind this on Saturday," he wrote. "It's bigger than a football game."

The idea took off, with buzz on the SEC Network and other outlets.

Standridge told CNN that he "didn't think it would gain the traction it did."

He and a local charity, Bulldogs Battling Breast Cancer, had been plotting a "pink out" of Sanford Stadium later in the season, but chose to move up the date after hearing about Anderson's loss.

He said he wanted to show Coach Anderson and the Arkansas State community what good sportsmanship looks like.

"It's just the right thing to do," Standridge said.

In an interview with ESPN's College Gameday before the game, Anderson said, "It's overwhelming, to be honest with you." He said he'd teared up when he first about the pink out plans.

"It'll be hard today. But very honored. And just appreciate all the support," he said. "We've leaned on a lot of people to get through this."

Inside the stadium, Bulldog fan Hannah Kay Herdlinger told CNN via a text message, "The entire stadium is sporting pink from ribbons to wristbands, earrings and T-shirts. On the field it is a competitive game, but in the stands we are all united."

Standridge lives in Athens, home of UGA, and graduated from the school in 1992.

Helping women battling various cancers is deeply personal to him. He lost his own mother to ovarian cancer when she was just 37.

"Me and her were really close," he said.

A few years ago he joined the board of Bulldogs Battling Breast Cancer, where he leads fund-raising efforts to support the organization's goal of providing free mammograms to hundreds of women annually at Athens' St. Mary's Hospital. That happens to be the same hospital where his mother was diagnosed and received chemotherapy treatments.

"If you're not affected by cancer personally, you know somebody who is," Standridge said. "Early detection is the key. Go to the doctor. Schedule your mammogram."

Standridge said he'll get into the stadium for the game and pause a moment to look up at the sea of pink.

"I'll be thinking about my mom knowing she'll be looking down and smiling," he said.