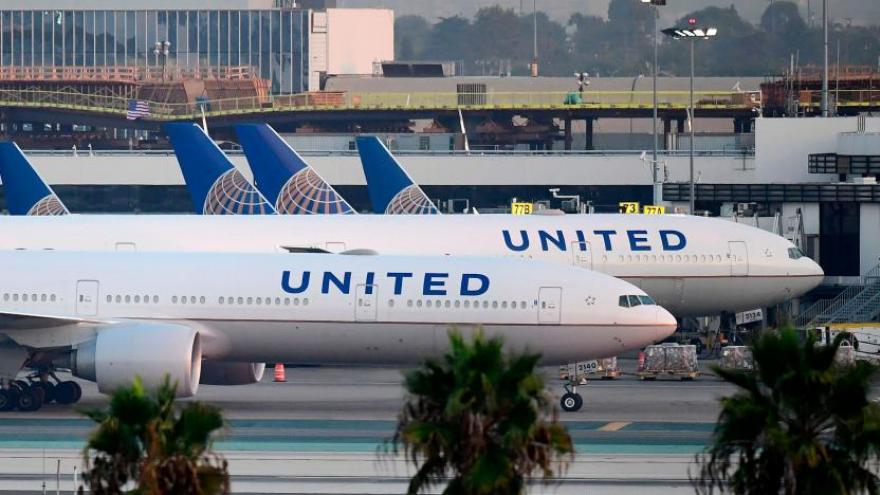 United Airlines is working with the Centers for Disease Control and Prevention to contact anyone who was on board a diverted flight from Orlando to Los Angeles after the death of a passenger who may have exhibited coronavirus symptoms.

(CNN) -- United Airlines is working with the Centers for Disease Control and Prevention to contact anyone who was on board a diverted flight from Orlando to Los Angeles after the death of a passenger who had Covid-19.

Isaias Hernandez, a 69-year-old man from Los Angeles, was pronounced dead at a hospital. He died of acute respiratory failure and Covid-19, the Jefferson Parish Coroner's Office said Tuesday.

At the time of the diversion, airline staff were told the passenger had suffered cardiac arrest, a spokeswoman for the airline told CNN.

The passenger's wife was overheard telling the EMT that her husband had Covid-related symptoms, including loss of taste and smell, according to the spokeswoman.

However, Covid-19 was never confirmed by the medical professionals at the time, the spokeswoman said.

When he checked into the flight, the passenger acknowledged on the airline's Ready-to-Fly checklist that he had not been diagnosed with Covid-19 and did not have Covid-related symptoms, the spokeswoman said.

After receiving more information about the health of this passenger, "it is apparent he wrongly acknowledged this requirement," the spokeswoman said.

Because medical professionals initially ruled the emergency as cardiac arrest, the flight continued on to Los Angeles on the same plane, and passengers were given the option to deplane and take a later flight, according to the airline's statement. "A change in aircraft was not warranted," the airline said.

All passengers opted to continue on to Los Angeles.

The family confirmed the man had suffered from preexisting conditions, including high-blood pressure and upper respiratory issues, and was feeling sick leading up to the day of travel.

United is sharing requested information with the CDC "so they can work with local health officials to conduct outreach to any customer" the agency believes may be at risk for possible exposure or infection, the airline's statement said.

The company has been in touch with the man's family and has "extended our sincerest condolences to them for their loss," according to the statement.

EMT who gave man CPR says his training kicked in

Tony Aldapa, an EMT and Navy Veteran, was among three people on the flight who sprang into action when the man who died began having difficulties.

He told CNN's Chris Cuomo on Monday night that his training immediately kicked in and that he did not fear the possibility that the man he was treating had Covid-19.

"For me, everything just fell back on training," Aldapa explained. "That's what I've done for over a decade now and it's kind of become second nature."

"When you see something, you got to do something. That's what happened that night," he added, noting that he was one of three people who performed CPR on the man.

Aldapa works in an emergency room in Los Angeles and told CNN that he's been treating every patient as though they have Covid-19 since the pandemic began.

"It's unfortunate, but right now we have to treat everybody as if they do have Covid until we know for sure that they don't," he said. "My mindset was this individual needed CPR and, regardless of anything else that he could have had, CPR was the primary thing he needed at that moment in time."

Aldapa told CNN that he's been experiencing symptoms of Covid-19 since performing CPR on the flight, which has prevented him from getting a scheduled vaccine at work.

"The first couple of days afterwards I was real tired. I was exhausted. My body was hurting. But I attributed it to doing CPR for an hour," he explained. "But I developed a cough, had a headache."

Adalpa's symptoms have been mild and he has tested negative twice, with another test scheduled for Tuesday. But until he is cleared, he has been told not to get the vaccine.

"Since I was showing signs of an illness, it was advised that I don't get it at that time," Adalpa said. "As soon as I'm cleared, I will."

On Wednesday, United Airlines announced it will ask passengers for extra contact information in case anyone on their flight comes down with coronavirus.

The airline can then share that information with the CDC.

So far, no major Covid-19 outbreaks have been traced to a commercial flight in the US, but until now, there have not been any widespread contact tracing efforts of passengers.

Correction: An earlier version of this article had the wrong first name for Chris Cuomo.