United Airlines mandates Covid-19 vaccines for all US employees 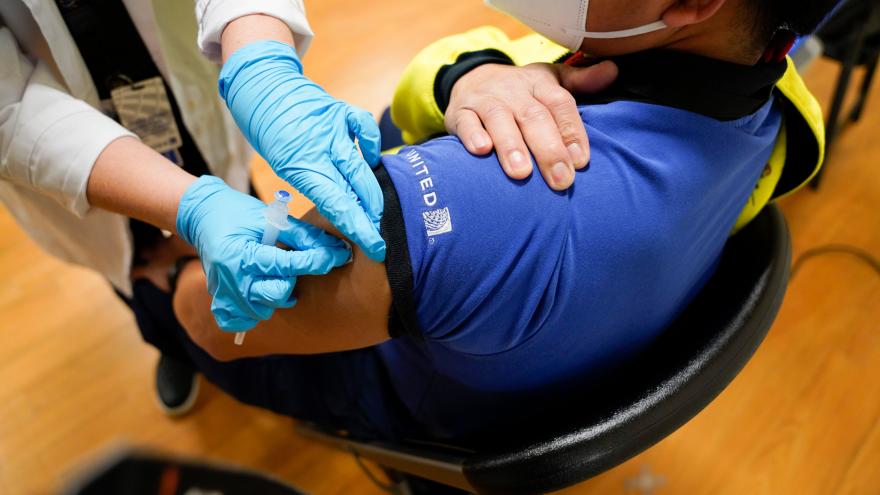 (CNN) -- United Airlines will join the growing list of companies that are requiring employees get vaccinated against Covid-19, the first major US airline to implement such a mandate.

A United executive said it was not considering a similar rule for passengers, and that any such requirement would be a decision for the government.

The airline set a late October deadline for US-based employees to prove vaccination status, and said it could move earlier if a vaccine receives full federal approval sooner. Any employee who refuses to show proof of vaccination will be fired, unless they can provide proof of religious or medical reasons for not getting vaccinated.

A United spokesperson said the airline will consider on a case-by-case basis employees who seek those health or religious exemptions, and that those employees granted exemptions will have to wear masks at all times.

United said while it has had discussions with its unions on the new rules it has not reached agreements with them.

The three of the largest unions at the airline — the Association of Flight Attendants, the Air Line Pilots Association and the Teamsters, which represents 6,600 mechanics at the airline — all issued statements to their members Friday suggesting the unions will accept the mandate. The flight attendants' union said 80% of its members are vaccinated, while the pilots' union said more than 90% for its members.

"Experts agree, vaccination is our best defense against Covid-19 and the extension of harm," said the notice from the flight attendants union to its members. "We've seen a notable uptick of test positives over the last two weeks, [the] majority of which are unvaccinated Flight Attendants, though some breakthrough infections have been recorded."

The pilots union's statement was more cautious, saying it believes the mandate "warrants further negotiations to ensure our safety, welfare, and bargaining rights are maintained." The group also said it believes recent court decisions suggest that "employer mandate would be determined to be lawful" if it were to be challenged in court.

The Teamsters also said it concluded that "employers have the right to mandate vaccinations in most instances." It said it would defend the rights of members who have "bona fide medical or religious reasons for not getting vaccines." It also said that it would seek separation packages for those who do not qualify for an exemption but who refuse to get the vaccine.

The International Association of Machinists, which represents 28,000 United ground employees — including ramp workers, passenger service and reservations agents among other positions — said that while it encourages vaccinations, it is still gathering information and listening to its membership's views about the mandate.

The airline set a late October deadline for employees to prove vaccination status, and said it could move earlier if a vaccine receives full federal approval sooner. Any employee who refuses to show proof of vaccination will be fired.

'We know some of you will disagree'

United said the October deadline was driven by a sense of urgency to protect its workforce, their family members and its customers. It cited statistics that show that while there has been a surge in Covid cases among those who are vaccinated, those who have had one of the vaccines are far less likely to need to be hospitalized or die from the recent surge in the disease.

"We know some of you will disagree with this decision to require the vaccine for all United employees," the airline said in email to staff. "But, we have no greater responsibility to you and your colleagues than to ensure your safety when you're at work, and the facts are crystal clear: everyone is safer when everyone is vaccinated."

United is also offering an additional day of pay for most employees who provide proof of vaccination by mid-September. The pay does not apply to United pilots and flight attendants who already have a union-negotiated incentive to be vaccinated.

"Over the last 16 months, [CEO Scott Kirby] has sent dozens of condolences letters to the family members of United employees who have died from Covid-19. We're determined to do everything we can to try to keep another United family from receiving that letter," said the notice to United employees. "Together we'll do our our part to defeat this virus."

United has required vaccines for new employees since mid-June. But those new employees are not yet part one of the unions that represent most of the employees at the airlines.

United had 80,000 employees on staff as of June 30, according to a company filing, and 85% are represented by unions. After deep job cuts during the pandemic, United and other airlines have been hiring this summer to meet the surge in leisure travel and the hoped-for rebound in business travel this fall.

Vaccine requirements by employers are becoming common. Among the other companies that have announced similar moves for some or all of its employees are Google, Disney, Facebook, Goldman Sachs, Morgan Stanley, Netflix, Tyson Foods and Walmart, the nation's largest private-sector employer.

Walmart is requiring proof of vaccination only for corporate employees, not employees in its stores. And some of those employers, such as the tech companies and banks, have few unionized employees.

Some of the other companies with vaccine mandates, such as Tyson and Disney, are in the process of negotiating their mandates with their unions.

Labor law covering the private sector generally requires changes in work conditions for represented employees to be reached through collective bargaining agreements. And some unions, while urging members to get vaccinated, have opposed vaccine mandates as a condition of employment.

Correction: An earlier version of this story misstated some of the worker categories that the Machinists and Teamsters unions represent.