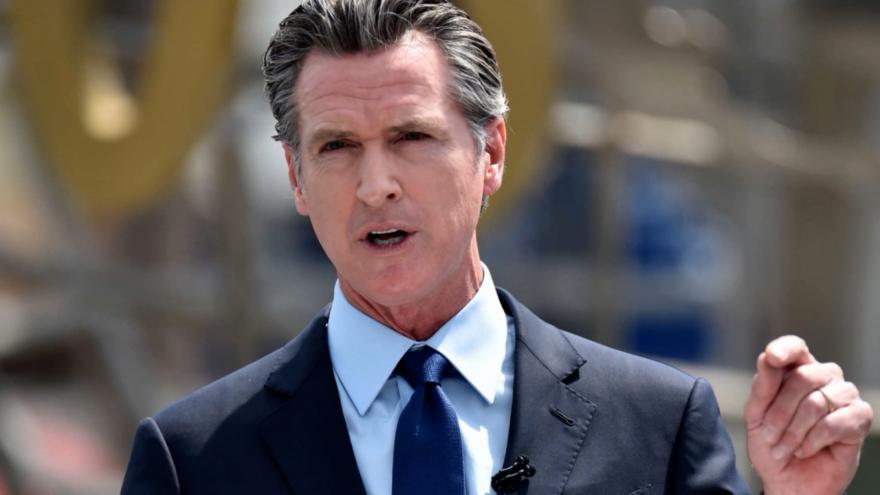 (CNN) -- It was approaching a sweltering 100 degrees when California Gov. Gavin Newsom jumped into the back of a flatbed truck to thank dozens of laborers for their work to keep him in office.

"I know what you are thinking," said Newsom in shirtsleeves and a tie. "He better be short, it is 100 degrees out here."

Labor has been central to Newsom's effort to keep his job, and if he is able to stave off a Republican-backed recall effort on September 14, he could have the scores of labor unions backing him to thank for it. The union workers in California have not only become Newsom's base because of their ties to labor, but because Newsom is also benefiting from deep support among voters of color -- many of whom made up the audience for the governor's speech on Sunday.

"Your family is here in the federation," Ron Herrera, head of the Los Angeles County Federation of Labor, said to Newsom, as union workers from across the county picked through barbeque provided by the Sheet Metal Local 105.

In Los Angeles County, where Newsom rallied on Sunday, the entire affiliation of labor unions through the AFL-CIO has spent at least $2 million to protect Newsom, according to the organization's spokesman Christian Castro. They have coordinated over 1,100 volunteer shifts, making over 550,000 phone calls and knocking on over 60,000 doors, with the goal of hitting a total of 100,000 doors by Election Day.

It's an effort Newsom was clearly aware of as he stood sweating on the Chevrolet flatbed.

"I just want to, from the bottom of my heart, say thank you to all working folks out here, all those essential workers here in the state of California," Newsom said, lauding the workers for their efforts during the coronavirus pandemic. "One thing I am resolved to do is not forget... You had our backs, and I want you to know, I will have your back."

Newsom told CNN after the event that the reason labor is so critical to him is simply because "no one knows how to organize better than labor."

"It's about boots on the ground, door knocking. It's about text messaging," said Newsom, whose campaign is primarily concerned about getting Democrats to the polls, not that they are supportive of this recall. "It's not a persuasion campaign. I mean, you'll still find people that may be on the fence, but it's really about turnout. Labor knows how to turn out."

Elder has argued the teachers' union is the biggest obstacle standing in the way of his plans to introduce more school choice to improve the education of California's children. He has been sharply critical of the way that Newsom shut down California's schools during the pandemic, arguing that it has had a disproportionately negative effect on Black and brown students, and has criticized Newsom's close relationship with the teachers' union -- calling the governor "beholden to the unions" -- as a reason that he went along with those plans.

"The number one obstacle to school choice is the teacher's union," Elder said at an event in Ontario, California, on Saturday. "Who is the number one funder of my opponent? Teachers Union!"

And in an interview with CNN last week, Elder slammed the money Newsom has raised from unions: "My opponent can raise an unlimited amount of money -- already he's raised about $50 million from the usual suspects: teachers Union, public sector unions."

But as the recall enters its final stretch, Newsom is not at all shying away from his labor ties, knowing that the potent organizations -- which enjoy a notably high approval rating at 65%, according to Gallup -- will be critical for his biggest issue: turnout.

Democrats outnumber Republicans nearly 2-to-1 in a state that President Joe Biden won by nearly 30 points. But polls throughout the summer showed that Republican voters were much more fired up than Democratic voters about casting their ballots in the recall. Still, in order to overcome their math problem in the Golden State, Republicans would have to post a massive turnout while Democratic turnout remained relatively low. Early ballot returns suggest that Newsom has made some headway in convincing Democrats that there is a real risk to their agenda if they don't participate.

For the union workers who spent Sunday afternoon munching on tacos, dancing to Selena and listening to Newsom, the recall effort was not only an affront to the work they did to elect Newsom a few short years ago, but an effort that is inextricably tied to race and immigration.

"Organized labor has been key in making sure that this becomes a deep blue state," said Hugo Soto-Martinez, a 38-year-old hotel worker who is represented by Unite Here Local 11. "The values of the state reflect the union values and those are workers, those are immigrants, those are people who work for a paycheck in this country."

Laborers like Soto-Martinez have been committing considerable time to keeping Newsom in office, either by knocking on doors or working the phones to connect with people about the looming recall.

Shavon Moore-Cage, a worker represented by AFSCME District Council 36, told CNN she calls voters at least three nights a week after she cooks dinner. The reason: Her union is diverse, and she wants to make sure that diversity is celebrated in California, not attacked.

Elder's campaign did not respond to a request for comment on this story.

In addition to labor, Newsom has also leaned on national Democratic figures to boost interest from the party's base -- rallying with Massachusetts Sen. Elizabeth Warren on Saturday in Los Angeles, Minnesota Sen. Amy Klobuchar on Sunday in Orange County and is set to rally with Vice President Kamala Harris on Wednesday in Northern California.

The rush of top Democrats flooding to California has given the recall effort a national tone, with Newsom stoking that sentiment as an effort to make the recall more of a referendum on national Republicans -- and the legacy of former President Donald Trump -- and less on his leadership of California.

But for the labor leaders Newsom rallied with on Sunday, the recall is as much about Newsom as it is about their union rights.