Unemployed workers in 29 states now getting $600 boost in benefits 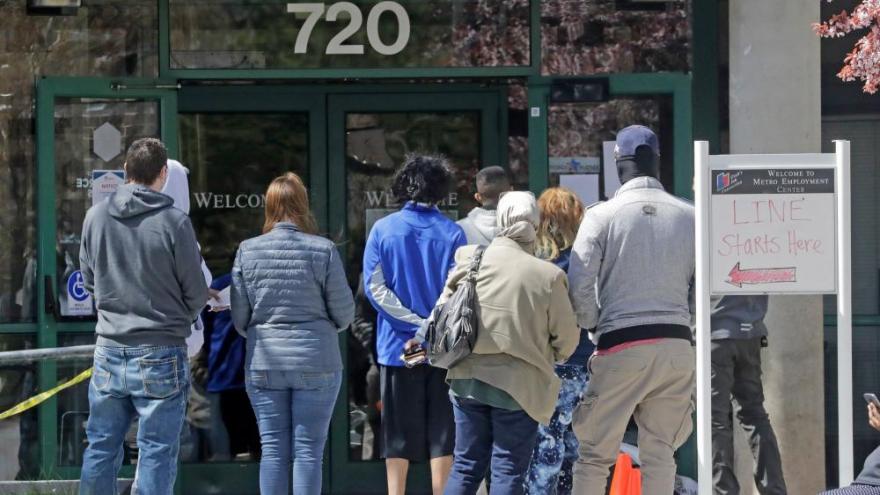 People line up outside the Utah Department of workforce Services Monday, April 13, 2020, in Salt Lake City.

Many states have now updated their computer systems to send out the additional $600 payment, which is part of the historic expansion of unemployment benefits that Congress included in its $2.2 billion relief package in late March. New York, New Jersey and California were among those that did so over the past week or so.

Some states, however, will take longer to start processing the extra cash, thanks to outdated computer technology, Labor Secretary Eugene Scalia said Wednesday. But the jobless won't lose out because payments will be retroactive to as early as March 29.

The unemployed can receive the enhanced payments -- which are paid on top of their regular state benefits -- for up to four months, though the program ends July 31 at the latest.

The coronavirus pandemic has forced non-essential businesses to close in most states, leaving millions of Americans out of work and overwhelming state unemployment agencies. Another 5.2 million Americans filed fresh unemployment claims last week, bringing the total of new claims to 22 million since mid-March.

That wave initially overwhelmed state labor offices. Some 46 states have now received $520 million in administrative funds from the second stimulus package, passed in mid-March. They are using this money to expand their capacity to handle record numbers of filers.

"We know that a number of states have now significantly increased staffing at their unemployment insurance offices," Scalia said. "We are seeing signs that states are getting past the operational problems that some experienced with the initial large increase in filings."

Labor Department officials also clarified that gig workers, particularly ride share drivers, can receive unemployment benefits if their business dries up because of the coronavirus, under the pandemic unemployment assistance program created in the relief package.

"There are a number of criteria that an individual can look at to see if they are eligible," said John Pallasch, assistant secretary, noting that one is "a significant diminution of their work as a result of Covid-19."

The pandemic program broadened unemployment benefits to cover certain people affected by the coronavirus, as well as independent contractors, the self-employed and gig economy workers, who are not typically eligible.

But Democratic lawmakers and advocates were concerned that the department's guidance, issued in early April, was too narrow and could end up excluding some of these workers.

Three states — Rhode Island, Louisiana and Texas — have started administering the pandemic program, a Department of Labor spokesperson said. Many states have indicated that it could still be a few more weeks before they launch the program, which requires a much more extensive update to state agencies' computer systems since it covers new categories of jobless Americans.