Ukrainians have retaken Irpin from the Russian invaders. But it's a city that now lies in ruins 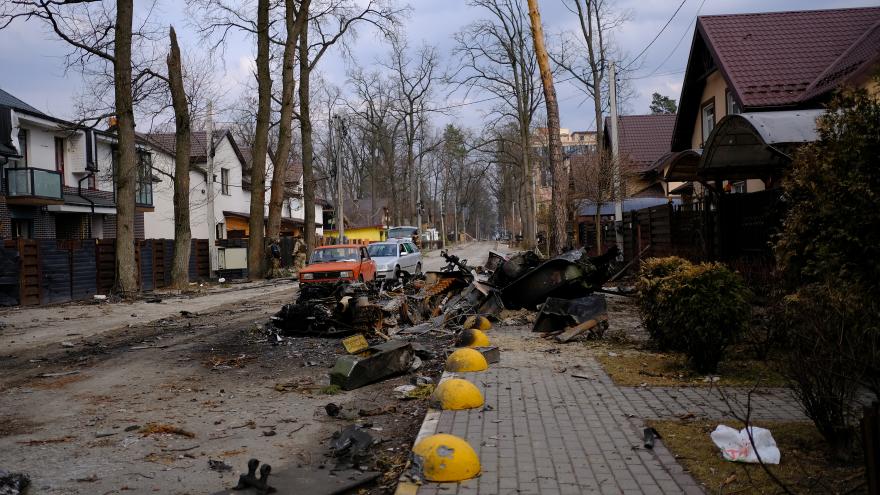 (CNN) -- A child's doll lies curb side, covered in dirt and debris, in the war-torn Kyiv suburb of Irpin.

There's not a sign of the child who owned it, or of any of the residents of the building next to it, which was shattered to pieces after taking a direct hit from Russian artillery.

This is what Irpin -- or what's left of it -- looks like, just a couple of days after Ukrainian forces took it back from Russian control.

The area is still extremely dangerous and remains off limits to civilians. As fighting continues in the nearby areas of Bucha and Hostomel, Irpin is still well within range for Russian artillery.

CNN was granted rare access to the city by Ukrainian forces on Thursday.

We snake our way to Irpin through dirt roads in the middle of the forest that separates the suburb from Kyiv at breakneck speed.

"It's safer this way," Andriy, the 29-year-old Ukrainian soldier driving us explains. "It's the best way of avoiding Russian artillery."

Across the Irpin river, the destruction caused by a month of confrontation between Russian and Ukrainian forces is everywhere. There are few unbroken windows, fallen trees in nearly every corner and no shortage of broken down or destroyed military equipment. Most of it is Russian.

The majority of the town's residents have fled, but Ivan Boyko decided to stay. He sent most of his family away, to safety, opting to endure the inferno of the Russian offensive.

Despite staying in Irpin, Boyko has been forced to move out of his house and into a bomb shelter because of all the intense shelling.

"It's impossible to go home," he explains. "Every night and day they shoot. It's scary to go out."

"People brought all they have to the bomb shelter," he adds.

After days of intense shelling, Irpin is eerily quiet, the silence only broken by sporadic gunfire in the distance. It looks like a ghost town.

Authorities here are using the opportunity to recover bodies of those killed in previous weeks. Less than 24 hours ago, they had to stop because of a Russian attack.

"Our police group, which was recovering cadavers, was fired upon with mortars," the Chief of Police for the Kyiv region told journalists in Irpin on Thursday. "They were lying under the bridge for an hour, waiting for it to stop."

"The enemy is acting dirtily. It can fire shots from a distance of up to 7 kilometers (around 4.3 miles)," he adds.

A few blocks away we meet 51-year-old Volodymyr Rudenko. Born and raised in Irpin, he is patrolling the town in military fatigues and an AK-47 in his hands.

He picked up arms when the Russians invaded and refused to leave -- even when they took partial control of the town.

"I haven't left Irpin since the first day of the war, not even for a single day," Rudenko says.

"It was very hard. There were very strong attacks," he explains. "...there were 348 impacts in one area in a single hour."

The ferocity of those bombings is on full display here and it is hard to see how any of the more than 60,000 of the town's residents could return anytime soon. Most buildings are either destroyed or damaged beyond repair.

According to local authorities, around 50% of the critical infrastructure has been destroyed.

Irpin is now under full Ukrainian control, but some Russian operatives remain in the area. Local authorities are organizing search parties for Russian soldiers who remain.

Mayor Oleksandr Markushin is leading one of the special forces units tasked with that job.

"We are working. There is information that there are two Russian soldiers dressed in civilian clothes," Markushin says.

"With our group, we are going to clean them up," he adds.

After a few hours, we drive out through the same dirt paths, hoping to avoid Moscow's artillery.

It's been a good day for Andriy and his fellow soldiers, with a lot less fighting in and around Irpin.

"The Russians are retreating," he says.

Retaking the town has lifted everyone's spirits and Andriy has faith Ukrainians won't stop there.