Ukrainians are fleeing in droves. But they're waiting more than 60 hours at the border 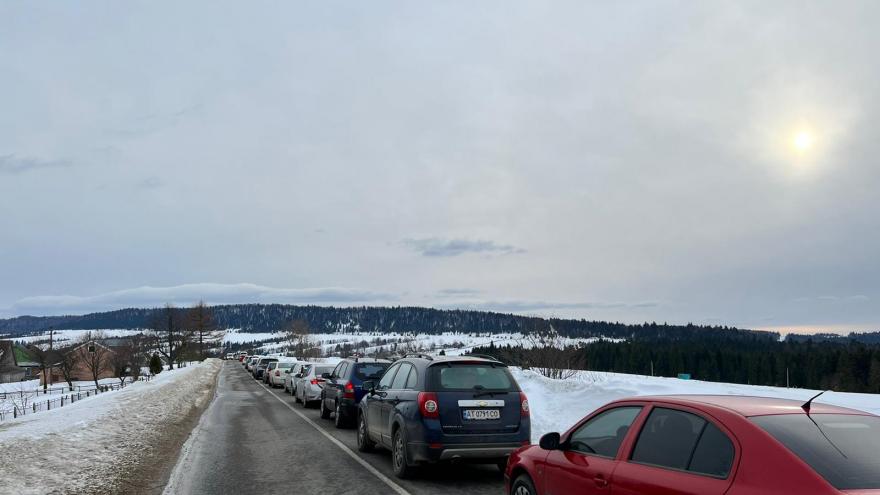 (CNN) -- Ukrainians have been leaving the country in huge numbers following the Russian invasion that began on Thursday, but many are being forced to wait more than 60 hours in long queues to cross into neighboring Poland.

A CNN team on the ground joined the queue but only moved just under half a mile (0.8 kilometers) in 70 minutes, a rate that meant it would have taken them more than 60 hours to cross the border. Of course, the wait times can vary.

About 30 miles (48 kilometers) from the border, some Ukrainians got out of their cars and began a long walk to the village of Medyka in southeast Poland.

Among them, two young girls skipped along happily, blissfully unaware that they were about to embark on a 30-mile walk.

"It's nice to cross but also it's very sad to leave my country in such despair," one woman said after crossing into Medyka in the early hours of Saturday. She said she had taken some belongings of sentimental value from her flat in Kyiv "just to remember it if anything happens."

On the M13 highway toward another point along the border, CNN's team encountered at least five checkpoints set up at entrances to the towns they passed through.

Concrete chicanes, or serpentine curves, had been put in place to slow traffic, and next to newly installed concrete barriers at some checkpoints, piles of tires were being gathered with the intention of setting them alight and rolling them into the road in the case of Russian forces trying to enter the towns.

On Saturday, the United Nations Deputy High Commissioner for Refugees, Kelly Clements, told CNN's Michael Holmes that more than 120,000 people had left the country and 850,000 were internally displaced.

"We would say that up to 4 million people could actually cross borders, if things continue to deteriorate, which they have until now," Holmes added, saying Ukrainians were having to make "life or death" decisions.

CNN's team said the Ukrainians walking to the border were largely women and children, and were "resigned" to the journey, having accepted it as "the only option they had."

Men between the ages of 18 and 60 are not permitted to leave the country, after Ukrainian President Volodymyr Zelensky imposed martial law in the aftermath of the Russian invasion.

At a gas station not far from the border, CNN spoke to a woman who had waited "days" to cross into Poland with her husband and two young children but was now going back home to the Ukrainian city of Lviv.

The family had tried to make the journey together, and were in the queue to leave when martial law was imposed. As the woman's husband had a permit to work in Poland, they attempted the crossing -- but her husband was turned away. Faced with the choice to split up or stay together, they decided to remain in Ukraine as a family.

However, men who are non-Ukrainian nationals are allowed to leave and have been seen waiting to cross at the border or at the train station among crowds largely composed of women and children. Many are students or hospitality and service workers.

Some Ukrainian men have had better luck than others, convincing border guards to allow them to leave. Sergei Zalankov was one of them, and left on a train to the Polish town of Przemysl with his wife and children.

"Most people, they just didn't have the tickets. So they just stormed the train... I mean, it was almost like a stampede," Zalankov told CNN. "People were trying to get inside no matter what."

At the train station, volunteers handed out food and linked up people with places to stay, including guest homes and a school gymnasium. People bundled up and tried to stay warm, and children slept on cots in the hallway. Several people held up signs offering new arrivals rides to various locations around Poland.

"It was chaos, it was a lot of people pushing around," Zalankov said of the train, saying nobody was checking tickets. "But I mean, people run to escape. People run for their lives, so I don't blame them."