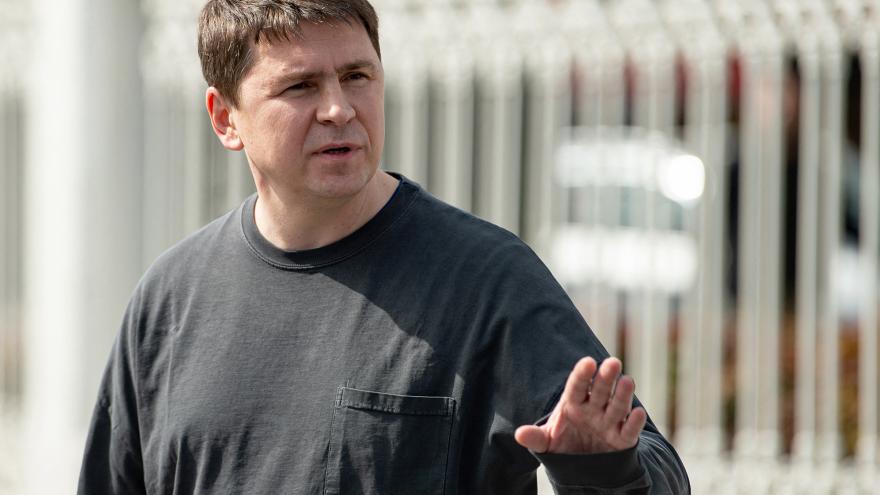 (CNN) -- As the Russian military shifts its campaign to focus on the east and south of Ukraine, Ukrainian presidential adviser Mykhailo Podolyak has called on the US and its allies to deliver heavier weaponry to the ex-Soviet nation.

"After the rapid retreat of the Russians from Kyiv and Chernihiv, it is clear that Russia has prioritized another tactic -- to move east/south, to control large occupied territories (not only in Donetsk and Luhansk regions) and to gain a strong foothold there," Podolyak said on Saturday.

"They have established in the east and south and are dictating harsh conditions," added Podolyak. "So we definitely can't do without heavy weapons if we want to unblock the east and Kherson and send [back] the Russians as far as possible."

Last month the Russian military said the "first stage" of its invasion of Ukraine was complete and that it would withdraw forces from around Kyiv and Chernihiv to concentrate on the Donbas region in the country's east.

Russia's announcement of that new phase in part may provide political cover for the Russian military, explaining heavy setbacks in the battles around Kyiv, but Ukrainian officials have also reported a ramping up of military activity and shelling in the Donbas by Russian forces.

Podolyak alluded to the expectation from US and Western officials that Ukraine might need to prepare for partisan warfare in the event of Russian invasion and the fall of the Ukrainian capital.

"Our partners must finally understand that the 'Afghanization' they want and the long-lasting exhausting conflict for Russia will not happen," said Podolyak, a reference to the Kremlin's bloody nine-year campaign to support the Marxist government in Kabul.

The war, which began when Soviet forces invaded in 1979, claimed nearly a million Afghan lives and 15,000 Russian troops, with a further 50,000 wounded.

"'Afghanization' is when there is a strong guerrilla resistance across the country that inflicts heavy losses on the aggressor for many months or even years and thus significantly weakens the power of the occupier's army," explained Podolyak.

"Such actions took place during the Soviet Union's attempt to control Afghanistan: Afghan guerrillas destroyed and weakened the Soviet occupiers for years. As a result, weakened Russia as a whole.

"Russia will leave all Ukrainian territories except the south and east. And will try to dig in there, put in air defense and sharply reduce the loss of its equipment and personnel," added Podolyak.

The Ukrainian presidential adviser's comments came hours after the Russian ambassador to the United Kingdom, Andrei Kelin, said that if Britain delivers long-range artillery weapons and anti-ship systems to Ukraine, they would be "legitimate targets" for Russia.

"Any weapon deliveries are destabilizing, especially the ones mentioned by (Ben) Wallace (the British Defense Secretary)," said Kelin, according to Russian state news agency TASS. "They exacerbate the situation and make it bloodier."

"Apparently, these are new, rather high-precision weapons. Of course, they will be legitimate targets for our armed forces if they cross the border of Ukraine."

"I have a feeling that London's idea of what is happening in Ukraine militarily is formed on the basis of the bravado reports of the Ukrainian Ministry of Defense and the Ukrainian leadership," Kelin said.

Russian officials have long complained about deliveries of advanced military weapons to Ukraine by the US, the UK, and other NATO allies, who have provided anti-tank weapons and man-portable air defenses -- some of which have enabled Ukrainian troops to blunt Russian advances.