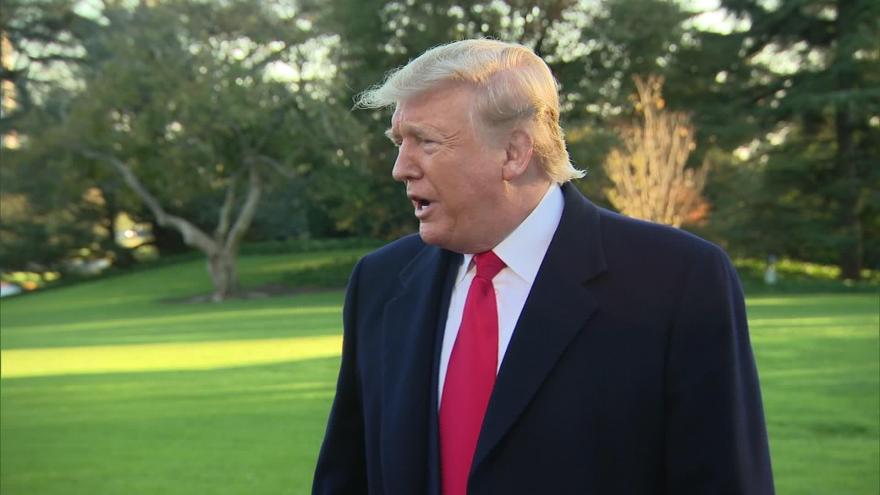 Ukrainian officials are discussing ways to improve their country's standing with President Donald Trump amid the continuing fallout from the impeachment inquiry, two sources told CNN.

The Ukrainian Embassy in Washington did not reply to a request for comment.

Trump's request for Ukrainians to investigate their country's interference in the 2016 election -- a debunked theory -- and former Vice President Joe Biden and his son, Hunter Biden, is a cornerstone of the House Democrats' impeachment investigation. Whether that request was tied to a White House meeting and the withholding of military aid to Ukraine is at the crux of the impeachment inquiry.

Numerous witnesses in the inquiry have testified both publicly and privately about efforts made by Trump administration officials -- namely Ambassador to the European Union Gordon Sondland and former US Special Representative for Ukraine Kurt Volker -- and Rudy Giuliani to get the Ukrainians to make a public statement committing to those investigations.

At one point, President Volodymyr Zelensky was expected to make such an announcement on CNN -- a move which Amb. Bill Taylor, the top US diplomat in Ukraine, expressed strong reservations about. In his public testimony, Taylor said Zelensky knew that it was "a bad idea to interfere in other peoples' elections."

In recent weeks, Zelensky noted that everyone in Ukraine is "tired about Burisma," the Ukrainian natural gas company at which Hunter BIden served on the board. However, Zelensky did not explicitly rule out an investigation.

David Holmes, the political counselor at the US Embassy in Kiev, said in public testimony last week that Zelenksy "withstood pressure for a very long time" and didn't give an interview announcing the investigations that Trump wanted. Holmes also warned that Ukrainians still want things from the Trump administration that they have not gotten.

"Although the hold on the security assistance may have been lifted, there were still things they wanted that they weren't getting, including a meeting with the President in the Oval Office," Holmes said. "I think that continues to this day, I think they are being very careful -- they still need us now, going forward."

The sources who spoke to CNN reiterated this, noting that the Ukrainians are not only cognizant of their dependence on the US for security assistance, they are also seeking more support. However, they don't know who they can work with and trust to make their case in a compelling way to Trump, the sources said.

Many of the American officials who handle US-Ukraine relations are now involved in the impeachment probe, and are now viewed by the Ukrainians as having lost the "confidence of Trump," according to one of the sources. The President has repeatedly and publicly berated several of the diplomats who have testified in the inquiry.

"They need a special envoy who has direct access to Trump," the source said.

Volker, who left the special envoy role in late September, was viewed as someone who had a direct line to influential players inside the White House and also had good working relationships with Ukrainian officials. Sources told CNN that Ukrainian officials have inquired about Volker's replacement and hope that the role will be filled soon. The State Department has not replied to a request for comment on when -- or if -- Volker will be replaced.

The effort to reverse negative perceptions of Ukraine comes at a particularly sensitive time for the Ukrainian government. Zelensky is slated to meet with Russian President Vladimir Putin in Paris on Dec. 9 to discuss the conflict in eastern Ukraine, talks that will include the leaders of Germany and France.

Ukrainian political observers are concerned that Zelensky's overtures to Putin could lead to weaker position at the bargaining table, particularly as European leaders, including French President Emmanuel Macron, seek ways to warm relations with Moscow.

Although the US is not a participant in those talks, State Department spokesperson Morgan Ortagus issued a statement of support for Ukraine "as it moves forward with peace negotiations."