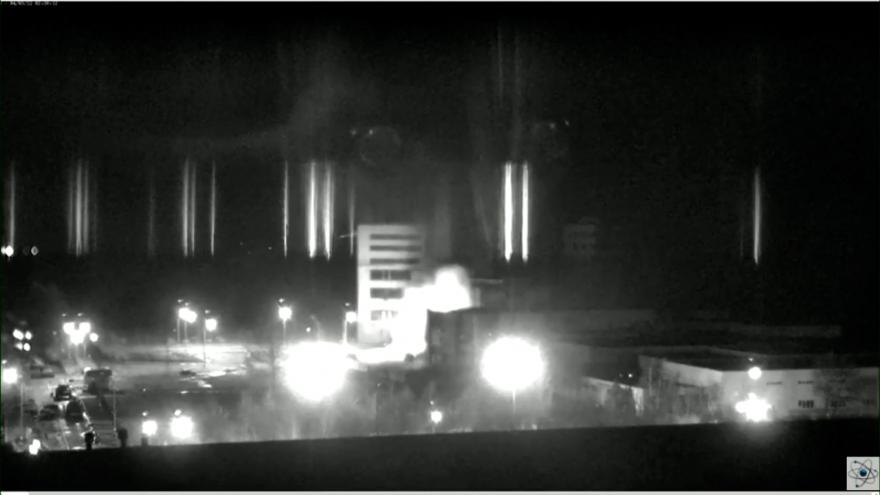 (CNN) -- Russian troops have occupied Ukraine's largest nuclear power plant, with managers working at "gunpoint" after a fire caused by their attack was extinguished, according to Ukrainian nuclear officials.

Countries around the world swiftly condemned the episode, with the United States embassy in Ukraine warning an attack on a nuclear plant was a "war crime" and the United Nations Security Council convening an emergency meeting.

The power plant's six reactors remained intact, though the compartment auxiliary buildings for reactor unit 1 had been damaged, the SNRI said in its statement. Four of the remaining units were being cooled down while one unit is providing power, the statement said.

"Today there is no connection, the station management works at invaders' gunpoint," Kotin continued.

"As for the staff, they were admitted in the morning to perform their duties. We do not currently have a direct connection to the station. We get information from the sources at the station."

Kotin warned that although the reactors are safe, further attacks could lead to "disaster."

Ukraine's State Emergency Services (SES) had earlier confirmed several dozen firefighters had extinguished a blaze that had started in a training building outside the main reactor complex, following shelling from Russian military forces.

Reports of the fire raised concern from world leaders and the International Atomic Energy Agency (IAEA) -- who called for a stop to fighting around the facility -- though the IAEA said Ukrainian authorities had reported background radiation levels were normal and the fire had not affected "essential" equipment.

Zelensky also reiterated his appeal for a NATO no-fly zone. "An immediate closure of the skies over Ukraine is needed," he said.

However this was ruled out by NATO's Secretary General Jens Stoltenberg, who said at a press conference in Brussels on Friday: "We've agreed that we should not have NATO planes operating over Ukrainian airspace or NATO troops on Ukrainian territory."

The US Embassy for Ukraine said "it is a war crime to attack a nuclear power plant," according to a tweet on the embassy's Twitter feed on Friday. "Putin's shelling of Europe's largest nuclear plant takes his reign of terror one step further," it added.

Speaking at a press conference in Vienna on Friday, the IAEA's Rossi said the safety of the reactors had not been affected.

"We are fortunate there has not been a release of radioactive material and the integrity of the reactors has not been compromised," he said. However, the operator and regulator have relayed to the IAEA that the situation on the ground is "extremely tense and challenging," he warned.

He explained that a Russian projectile had hit a building within the site, causing a localized fire, but none of the reactors were affected and radiation monitoring systems are fully functional.

Ukrainian staff are still at the helm of operations at the plant, but "effective control" of the site was in the hands of Russian forces, Grossi said, adding: "I hope the distinction is clear." He said that what happens next at Zaporizhzhia is "a situation that is very difficult to sustain, very fragile" while there is an active military operation and Russian forces in control. "This is unprecedented," he said. "Completely uncharted waters."

Grossi later told CNN's Christiane Amanpour that although radioactive material was not released, it was a "close call."

"Luckily the situation did not degrade into a nuclear accident, there was no release of radioactive material, but of course it was a close call," he said.

He told Amanpour that he had warned both sides that "the utmost restraint is to be exercised in and around this type of facility. Because wittingly or unwittingly, you can very quickly go into a disaster, and this is why we're so concerned."

Speaking at an emergency meeting of the UN Security Council later, the IAEA's under-secretary general for political affairs, Rosemary DiCarlo, said that attacks on nuclear power facilities were contrary to international humanitarian law.

"Every effort should be taken to avoid a catastrophic nuclear incident," she said.

The US ambassador to the UN, Linda Thomas-Greenfield, told the meeting that the world "narrowly averted a nuclear catastrophe last night."

She called Russia's reactions "reckless" and "dangerous," saying it put Europe's largest nuclear power plant at grave risk and threatened the safety of civilians in Russia, in the UK and across the European continent. Russian forces were also 20 miles away from Ukraine's second largest nuclear facility, she noted.

"Nuclear facilities cannot become part of this conflict," Thomas-Greenfield said. "Mr Putin must stop this madness, and he must stop it now."

Reports of the attack on the facility emerged early Friday morning, with video of the scene showing bursts of gunfire apparently directed at the Zaporizhzhia facility before dawn.

Flames could also be seen on video footage, though for some time it was unclear where the fire was or the scale of the threat posed to the facility.

The Russian government later claimed Ukrainian "provocation" had led to a firefight around the nuclear power plant.

In a video briefing, Russian Ministry of Defense spokesperson Maj. Gen. Igor Konashenkov said Russian forces took the city of Enerhodar, the Zaporizhzhia nuclear power plant and the territory adjacent to it on February 28. Konashenkov claimed the plant's technical staff continued regular work on the facilities, but that Ukrainian forces attempted a "monstrous provocation" in the early hours of Friday. Konashenkov also claimed the Ukrainians had set fire to the training building themselves.

CNN could not immediately verify any details of the firefight on the territory of the plant.

The Russian government has routinely and without evidence claimed the Ukrainian government is staging "provocations" to provoke a military response by Western governments.

Only Russia and China voted against the resolution, according to the Ministry of Foreign Affairs of the Czech Republic.

It's the not first nuclear plant to come under threat from the Russian invasion. On the first day of the assault, Russian forces seized control of the Chernobyl power plant in northern Ukraine, the site of the world's worst nuclear disaster, according to Ukrainian officials.

The Chernobyl nuclear power plant reactor exploded in 1986, when Ukraine was part of the Soviet Union -- sparking a disaster that affected, directly or indirectly, nine million people, due to radioactive materials released into the atmosphere.

The IAEA said in a statement that Ukraine had informed it staff held at the Chernobyl nuclear power plant since Russian military forces took control of the site a week ago were facing "psychological pressure and moral exhaustion."