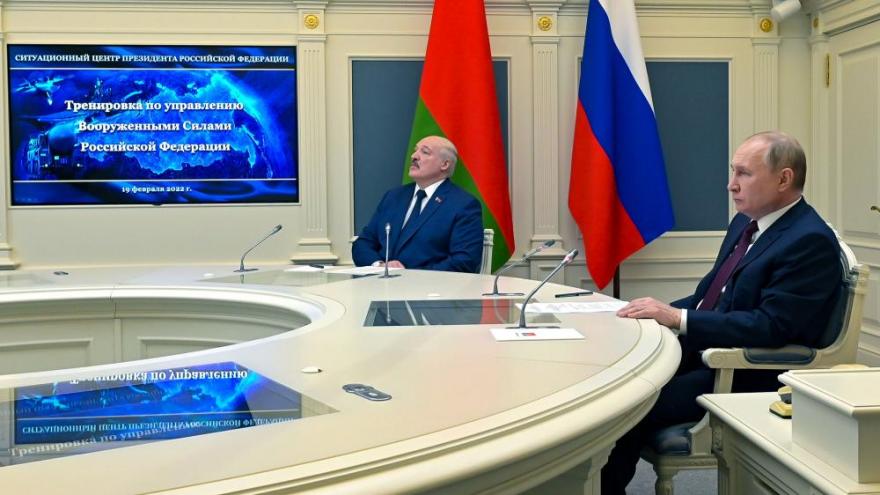 Russian President Vladimir Putin, right, and Belarusian President Alexander Lukashenko. A Ukrainian government official tells CNN that Ukrainian intelligence indicates Belarusian "readiness to maybe participate directly" in the invasion of Ukraine, "in addition to allowing Russians to use their territory as well as letting them cross the border."

(CNN) -- A Ukrainian government official tells CNN that Ukrainian intelligence indicates Belarusian "readiness to maybe participate directly" in the invasion of Ukraine, "in addition to allowing Russians to use their territory as well as letting them cross the border."

So far, however, US officials have not seen Belarusian troops "being readied to move into Ukraine" or "that they are moving or are in Ukraine," a senior US Defense official told reporters Monday, adding that the forces inside Ukraine are Russian.

The intelligence about Belarus' potential participation in the invasion sparked fresh concern within the Biden administration. A senior administration official said the White House is watching actions taken by Belarus closely and is prepared to levy more sanctions on the country. In a sign of the escalating turmoil in the region, the US announced Monday that it was suspending operations at its embassy in Belarus.

The Washington Post first reported that Belarus was preparing to send soldiers into Ukraine, citing a US administration official. The White House declined to comment. CNN has reached out to the US State Department for comment.

Talks began Monday between Russia and Ukraine near the Belarusian border as Russia's unprovoked invasion of Ukraine enters its fifth day.

A senior Biden administration official says the White House is watching actions taken by Belarus closely, and is prepared to levy more sanctions on the country amid reports that Belarusian forces could join Russia in its invasion of Ukraine.

"We've said to the extent Belarus continues to aid and abet Russia's aggression in Ukraine, they will also face consequences," the senior administration official said. "We've already rolled out some of those measures. Those costs will continue to ratchet much higher." The US Treasury Department issued sanctions against 24 Belarusian individuals and entities last week.

In announcing the decision to suspend operations at the US Embassy in Belarus, US Secretary of State Antony Blinken cited the "unprovoked and unjustified attack by Russian military forces in Ukraine" but did not point to any intelligence regarding potential military action by Belarus. Non-emergency employees and family members will also be permitted to depart the US Embassy in Moscow, Blinken said.

'If it becomes necessary'

"Our troops are not participating in any way in this operation. We're not going to justify ourselves here about our participation or non-participation in this conflict. I repeat once again. Our troops are not there but if it becomes necessary, if Belarus and Russia need them, they will be there," Lukashenko said on tape from state news agency Belta's YouTube channel.

"Belarusians, this is a referendum for you as well. You decide who you are and whom to become. How you would look in you children's eyes. How you'd look in each other's eyes. In your neighbor's eyes. And we are your neighbors," he said.

Belarus announced Sunday that the country had renounced its non-nuclear status in a referendum that day. According to the Belarus Central Elections Commission, 78.63% of the eligible voting population took part in Sunday's referendum, of which 65.16% voted in favor of approving a new constitution that will shed the country's non-nuclear status and give Lukashenko the opportunity to run for two additional terms in office.

The new constitution could theoretically allow Russia to place nuclear weapons back in Belarus for the first time since the fall of the Soviet Union, when Belarus gave up its stockpile and became a nuclear free zone.

The amendments and additions to the constitution passed in Sunday's referendum will come into effect in 10 days' time, according to Lukashenko's office.