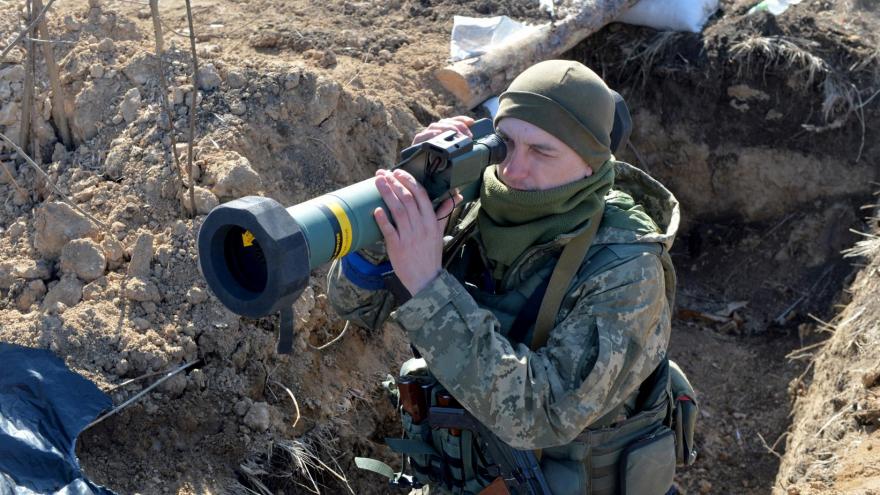 A serviceman of Ukrainian military forces holds a FGM-148 Javelin, an American-made portable anti-tank missile, at a checkpoint, where they hold a position near Kharkiv on March 23.

(CNN) -- Ukraine has updated its extensive wishlist of additional military assistance from the US government in the past several days to include hundreds more anti-aircraft and anti-tank missiles than previously requested, according to a document provided to CNN that details the items needed.

The Ukrainians have submitted similar lists in recent weeks but a recent request provided to US lawmakers appears to reflect a growing need for American-made Stinger anti-aircraft missiles and Javelin anti-tank missiles -- with Ukraine saying it urgently needs 500 of each, daily.

In both cases, Ukraine is asking for hundreds more missiles than were included in a similar list recently provided to US lawmakers, according to a source with knowledge of both requests.

The new list comes as the Ukrainians have claimed they face potential weapons shortages amid an ongoing Russian assault -- prompting some pushback from US and NATO officials who stress that more military aid is already going into the country.

By March 7, less than two weeks into Russia's invasion of Ukraine, the US and other NATO members had sent about 17,000 anti-tank missiles and 2,000 anti-aircraft missiles into Ukraine.

Since then, NATO countries, including the US, have kept the pipeline of weapons and equipment flowing, even as Russia has threatened to target the shipments.

The last of a US $350 million security assistance packaged approved in late February arrived in Ukraine within the last few days, a senior defense official said, while the next two packages totaling $1 billion have already started to arrive.

President Joe Biden said Thursday that "armor systems, ammunition and our weapons are flowing into Ukraine as I speak." The defense official said it would be "multiple flights over many days" to get the equipment to Eastern Europe before it enters Ukraine at multiple land border crossings.

Meanwhile, on Wednesday, the United Kingdom announced it would ship 6,000 more missiles, including anti-tank and high explosive weapons, to Ukraine, along with approximately $33 million in financial backing for the Ukrainian military.

The list provided to CNN details several other urgent needs, including: jets, attack helicopters and anti-aircraft systems like the S-300.

Two types of Russian-made jets are listed in the document, including one designed to provide close air support for troops on the ground. Ukraine has asked for 36 of each aircraft, according to the list provided to CNN.

Some lawmakers in Congress believe the US should provide Ukraine with the weapons they're requesting as quickly as possible.

Rosen said her biggest takeaway from the trip was the "sense of urgency" on the ground.

"They need all the tools to not just survive the war, but to win the war, so whether we provide them air-to-ground missiles, drones, all the military support," Rosen told CNN.