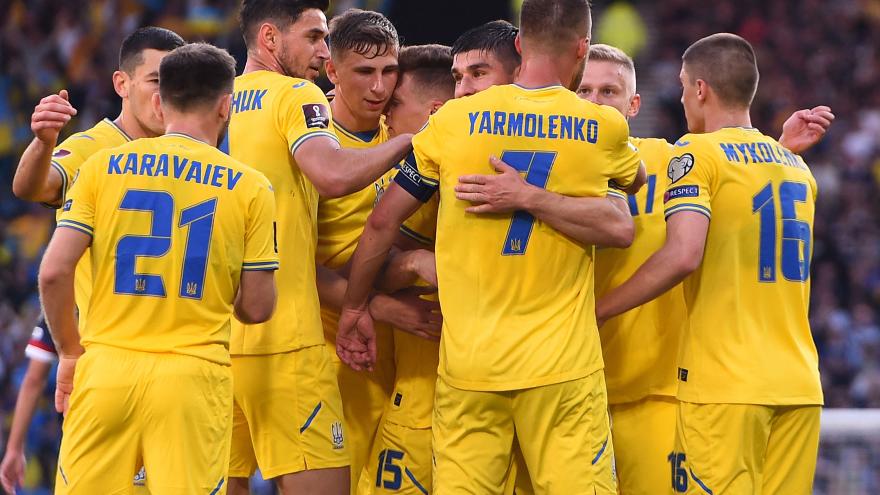 (CNN) -- Despite a preparation like no other for an international football fixture, Ukraine produced a momentous performance to beat Scotland 3-1 in its World Cup playoff semifinal at Hampden Park in Glasgow Wednesday.

The emotional victory, that brought many watching Ukrainian fans -- sporting yellow and blue colors -- to tears, puts Ukraine just one win away from qualifying for the Qatar World Cup later this year.

Wednesday's playoff had originally been scheduled to take place in March, but Russia's invasion of Ukraine forced the match's postponement. Ukraine now needs to beat Wales in Cardiff on Sunday in its playoff final to reach the World Cup.

Before the game, the visitors had spoken about giving those back in their homeland a morale boost during the war and they did just that courtesy of goals from Andriy Yarmolenko and Roman Yaremchuk.

Ukraine was made to suffer more in the second half after Callum McGregor scored with just 10 minutes to play but the visitors added a third goal in stoppage time when Artem Dovbyk ran clear to secure a magical victory.

Given that staying in Ukraine had been too dangerous, the squad have been based at a training camp in Slovenia since May 1 preparing for Wednesday's game. Prior to playing Scotland, Ukraine's last competitive game had been in November.
More to follow.