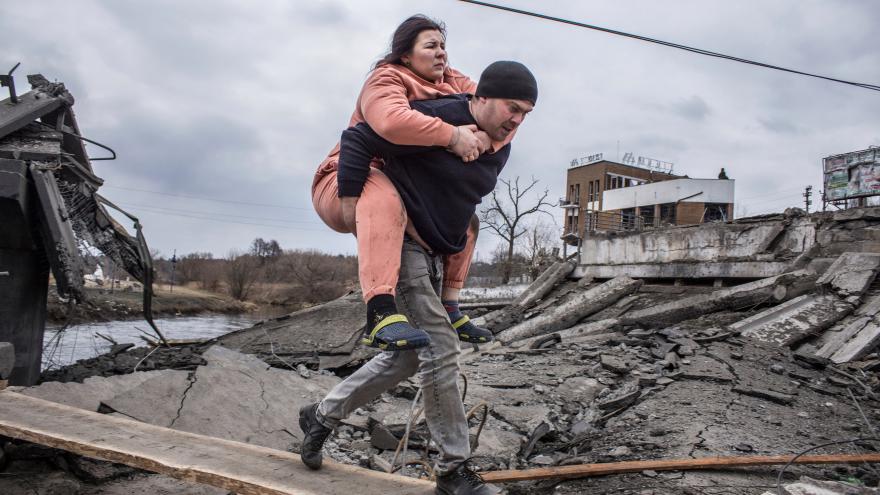 (CNN) -- Ordinary Ukrainians living in some areas under attack by Russian forces faced a cynical proposal on Monday: stay put and risk getting bombed, or leave home and head for Russia or Belarus.

Ukrainian officials rejected the Kremlin's unilateral proposal for evacuation corridors for civilians as an unacceptable non-starter. Most of the routes lead to Russia or its staunch ally Belarus and would require people to travel through active areas of fighting.

Ukrainian deputy prime minister Iryna Vereshchuk responded to Russia's announcement by demanding that Moscow "accept options for our routes, as well as ... establish a ceasefire, which we will agree on." Ukraine has requested that evacuation corridors are opened that largely keep citizens inside Ukraine's borders.

The United Nations also led a chorus of international condemnation towards Russia's proposal on Monday. "It's important that people be able to go where they choose and where it's safe," UN spokesman Stéphane Dujarric told reporters, rejecting the Kremlin's proposal.

Regardless, skepticism toward such corridors was growing after evacuations of civilians were paused within hours on both Saturday and Sunday when Russian forces were accused of shelling the escape routes.

There were two failed attempts over the weekend to open a corridor from the besieged port of Mariupol. And on Sunday, a Russian military strike killed a family with two children as well as several other civilians trying to flee the Kyiv suburb of Irpin, according to the mayor.

Ukrainian authorities said two mortar or artillery shells hit a checkpoint in Irpin, northwest of the capital, which has been the site of intense shelling by the Russian military in recent days. Over the weekend, US Secretary of State Antony Blinken said America has seen "very credible reports of deliberate attacks on civilians" in Ukraine that would be considered a war crime.

In remarks to the UN Security Council Monday, Ukraine Ambassador to the UN Sergiy Kyslytsya said that it was "appalling" that Russian troops were opening fire on evacuees after both countries had allocated certain roads to be utilized as evacuation corridors.

The argument over evacuation corridors comes as Russia steps up efforts in its assault on Ukraine. Attacks on the capital, Kyiv, have intensified, while citizens in Mariupol and other key cities have been without water and food for days, unable to flee.

Dominik Stillhart, the International Committee of the Red Cross's director of operations, said Monday that problems remained in confirming the details of any ceasefire agreement.

Stillhart told BBC Radio 4's Today program the challenge was to get Russia and Ukraine into an agreement that is "concrete, actionable and precise."

He added that so far there had only been agreements "in principle," which had immediately broken down because they lacked precision, regarding routes and who can use them. Illustrating his point, he said some ICRC staff had tried to get out of Mariupol along an agreed route on Sunday, but soon realized "the road indicated to them was actually mined."

Earlier Monday, Russian Defense Ministry said in a statement that the civilian corridors leading directly to Russia were part of a personal request from French President Emmanuel Macron to his Russian counterpart, Vladimir Putin.

But the Élysée Palace responded with a statement saying this was false. It added that the "personal demand of the President of the (French) Republic, like the rest of the allies and partners, is that the Russian offensive ends."

"We urge the Russian Federation to stop manipulating and abusing the trust of world leaders such as Emmanuel Macron, such as the leaders of China, Turkey or India, and to make the routes we have identified open," Vereshchuk said in a video statement released by the government.

Martin Griffiths, the UN's Under-Secretary-General for Humanitarian Affairs and Emergency Relief Coordinator, urged "safe passage for civilians to leave areas of active hostilities on a voluntary basis, in the direction they choose" on Monday.

He also requested the need for "safe passage for humanitarian supplies into areas of active hostilities," in a speech to the UN Security Council.

"Civilians in places like Mariupol, Kharkiv, Melitopol, and elsewhere desperately need aid, especially life-saving medical supplies. Many modalities are possible, but it must take place in line with the parties' obligations under the laws of war," he said.