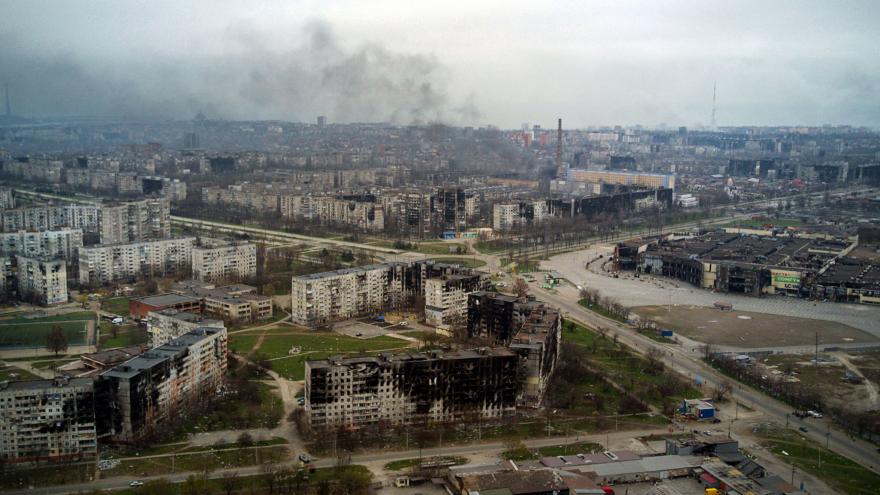 (CNN) -- Ukrainian forces besieged in Mariupol have rejected Russia's demands to surrender and are still resisting an unrelenting assault on the southeastern port city, top Ukrainian officials said on Sunday.

Ukrainian Prime Minister Denys Shmyhal said the city, which has been surrounded by Russian troops since March 1, has not fallen. Ukrainian troops trapped in the city are holding out against the Russian onslaught despite overwhelming odds. But they are confined to pockets of resistance, and their numbers are unclear.

"There are still our military forces, our soldiers so they will fight until the end and as for now they are still in Mariupol," Shmyhal said on ABC News' "This Week" after a Russian-set deadline for Kyiv's forces in the city to surrender passed on Sunday.

An adviser to the mayor of Mariupol also rejected the Russian ultimatum earlier on Sunday. Petro Andriushchenko said on Telegram that "as of today, our defenders continue to hold the defense."

Russia's Ministry of Defense has called on the Ukrainian soldiers still in Mariupol to surrender by 1 p.m. local time on Sunday, warning that anyone still resisting after the deadline "will be eliminated." The ministry has later confirmed that the ultimatum had been ignored.

In a statement, the Russian ministry said that the surrounded Ukrainian soldiers "were offered to voluntarily lay down arms and surrender in order to save their lives."

"However, the Kiev nationalist regime, according to the radio intercept, forbade negotiations about surrendering," the Ministry claimed.

It also asserted that according to Ukrainian soldiers who had previously surrendered "there are up to 400 foreign mercenaries who joined the Ukrainian forces" trapped at the plant, including Europeans and Canadians. "In case of further resistance, all of them will be eliminated," it said.

Shmyhal said that despite the relentless Russian attacks, "not one big city in Ukraine has fallen."

He said that more than 900 Ukrainian cities, towns and villages had been freed from Russian occupation since Moscow took control after the invasion began in late February.

"We still are fighting and we have battle in Donbas region right now but we do not have intention to surrender," Shmyhal said.

The situation in Mariupol is desperate. Much of the city has been completely destroyed by Russian shelling. Civilian structures that have been targeted included a maternity hospital and a theater where up to 1,300 people had been seeking refuge.

The military governor of Ukraine's Donetsk region, where Mariupol is located, said on Tuesday up to 22,000 people may have died in the city. CNN cannot verify these figures, as there are no independent casualty figures from the fighting in the city available.

Though many have fled, an estimated 100,000 people still remain in Mariupol and its immediate surroundings, which are reported to be largely under Russian control.

According to Russian state media, most of the Ukrainian defenders are located in the Azovstal steel works, one of the largest such plants in Europe with a network of rail tracks and furnaces. Andriushchenko said resistance to the Russians continued beyond this plant.

"Despite the occupiers' desire to show that the place of hostilities is limited to the Azovstal Steel Plant, this is does not correspond with reality," Andriushchenko said. "Last night there were fights on the Taganrog Street that is located five kilometers away from Azovstal."

He said that "during the fighting, the occupiers shelled private residential houses with heavy artillery again. The shelling of the port area also continued."

On Saturday during a late-night address, Ukrainian President Volodymyr Zekensky called the situation in Mariupol "inhuman" and "as severe as possible." He and his administration had been trying every day to end the siege through both military and diplomatic channels, he said.

"Russia is deliberately trying to destroy everyone who is there in Mariupol," he said in the video address.

In a separate article posted on the presidential website, Zelensky said he was open to talks with Russian President Vladimir Putin -- but negotiations would be impossible if further Russian war crimes surface.

On Friday, the Russian military claimed it had made advances into Mariupol. "The grouping of Russian troops and units of the Donetsk people's militia have completely liberated Illich Steelworks from Ukrainian nationalists as a result of the offensive in Mariupol city," said Russian military spokesperson Maj. Gen. Igor Konashenkov in a statement. CNN cannot independently verify that claim.

This came two days after the last remaining defenders in Mariupol carried out a "risky maneuver" to join forces and consolidate their defenses, according to Ukrainian presidential adviser Oleksiy Arestovych. Both units have been involved in a last-ditch attempt to resist the Russian offensive.

However, one of the unit commanders in Mariupol acknowledged that some Ukrainian defenders had surrendered.

In a statement earlier this week, members of the Ukrainian Marines posted a video statement vowing to fight on "until the end," despite being surrounded by Russian forces and running low on supplies. "We did not give up our positions," the Marines said in the video.

Ukrainian officials have warned of a major humanitarian emergency in Mariupol as food and water run out, with electricity and gas cut, urging the establishment of evacuation corridors to allow civilians to escape.

But several attempts have failed -- including an evacuation effort on Saturday, with wet weather halting operations. Buses were unable to travel through a washed-out section of road between the town of Vasylivka and Zaporizhzhia to its north, according to a social media post by Ukraine's Deputy Prime Minister Iryna Vereshchuk.

Instead, people leaving Mariupol, Berdiansk, Tokmak and Enerhodar cities were told to get to Zaporizhzhia themselves.

No evacuation routes are planned for Sunday because Ukrainian officials have been unable to agree routes with the Russians. Vereshchuk said on her Telegram channel: "We again demand providing the humanitarian corridor to evacuate civilians, especially women and children from Mariupol."

She added: "Through the relevant international organisations we also demand from the occupiers to open a special corridor for the evacuation of wounded soldiers from Mariupol."

Vereshchuk said on Saturday that 170 people did manage to escape from Mariupol to Zaporizhzhia with their own means of transport of Saturday -- but most of Mariupol's residents remain stuck in the city, facing constant bombardment.