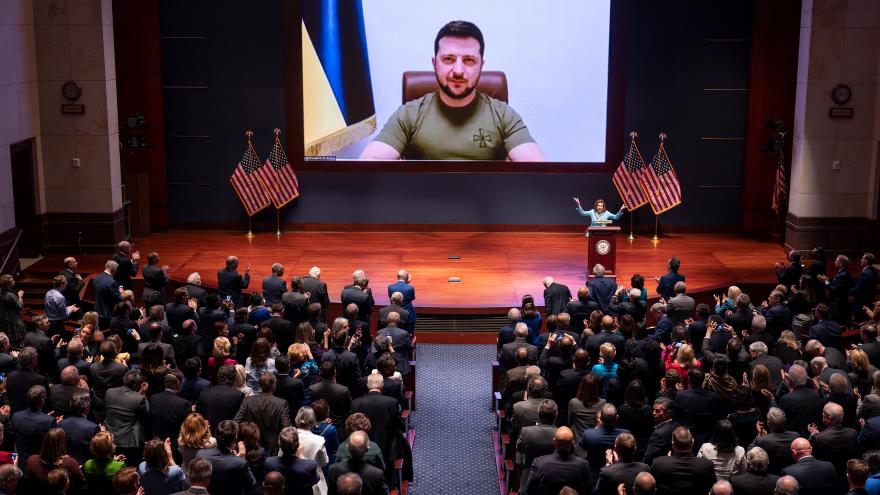 "We need you right now," Zelensky told US members of Congress in one of his latest pleas for assistance before a friendly government.

The US and other NATO member nations have fulfilled a number of Zelensky's requests, while stopping short of certain measures they say could risk an escalation in the war.

The military aid provided to Ukraine so far includes weapons that range from portable drones to complex, long-range missile systems.

Switchblade drones. Small, portable, so-called kamikaze drones that carry warheads and detonate on impact. The smallest model can hit a target up to six miles away, according to the company that produces the drones, AeroVironment. It's unclear which size model the US will send to Ukraine.

Javelin anti-tank weapons. This guided missile system can be shoulder-fired by a single solider and has a range of up to 8,200 feet.

AT-4 anti-armor systems. These Swedish anti-armor weapons are "lightweight, single-shot and fully disposable," according to the company that produces them, Saab Bofors Dynamics.

The battery includes missiles and launching stations, a radar set that detects and tracks targets, and an engagement control station, according to the Missile Defense Advocacy Alliance.

Beyond military aid to Ukraine, the US and its NATO allies have issued a slew of sanctions against Russia.

SWIFT. The US, EU, UK and Canada have banned certain Russian banks from SWIFT, the high-security network that facilitates payments among 11,000 financial institutions in 200 countries.

'Most favored nation' status. The House of Representatives has passed a bill to suspend normal trade relations with Russia. The final vote was 424-8 with strong bipartisan support for the legislation, which next heads to the Senate.

Energy and oil. EU officials said the bloc would slash imports of Russian natural gas by two-thirds this year, and the EU announced a plan to achieve energy independence from Moscow "well before 2030." That would separate Europe from its single biggest energy supplier.

Separately, President Joe Biden announced a ban on Russian oil, natural gas and coal imports to the United States. And the UK government said Tuesday it would phase out Russian oil imports by the end of 2022 and explore ways of ending natural gas imports as well.

As Russia's deadly invasion has continued, Zelensky has requested some actions that Western allies fear would put them in direct conflict with the Kremlin and escalate the war.

No-fly zone. Zelensky has repeatedly called on Ukraine's allies to establish a no-fly zone over the country. A no-fly zone is an area where certain aircraft cannot fly for any number of reasons. In the context of a conflict such as the one in Ukraine, it would probably mean a zone in which Russian planes were not allowed to fly, to prevent them from carrying out airstrikes against Ukraine.

The problem with military no-fly zones is that they have to be enforced by a military power. If a Russian aircraft flew into a NATO no-fly zone, then NATO forces would have to take action against that aircraft. Those measures could include shooting the plane from the sky. That would, in Russia's eyes, be an act of war by NATO and would likely escalate the conflict.

S-300 missile defense systems. This surface-to-air missile system can strike targets that are both higher in altitude and farther away than Stinger missiles are designed for.

Slovakia has preliminarily agreed to provide Ukraine with a key Soviet-era air defense system to help defend against Russian airstrikes, according to three sources familiar with the matter. But the US and NATO are still grappling with how to backfill that country's own defensive capabilities, and the transfer is not yet assured.

MiG fighter jets. Earlier this month, the US dismissed a proposal from Poland to transfer its MiG-29 fighter jets to the United States for delivery to Ukraine.

Pentagon press secretary John Kirby said in a statement that the US did not believe Poland's proposal was "tenable" and that it was too risky.

"The prospect of fighter jets 'at the disposal of the Government of the United States of America' departing from a U.S./NATO base in Germany to fly into airspace that is contested with Russia over Ukraine raises serious concerns for the entire NATO alliance," Kirby said.