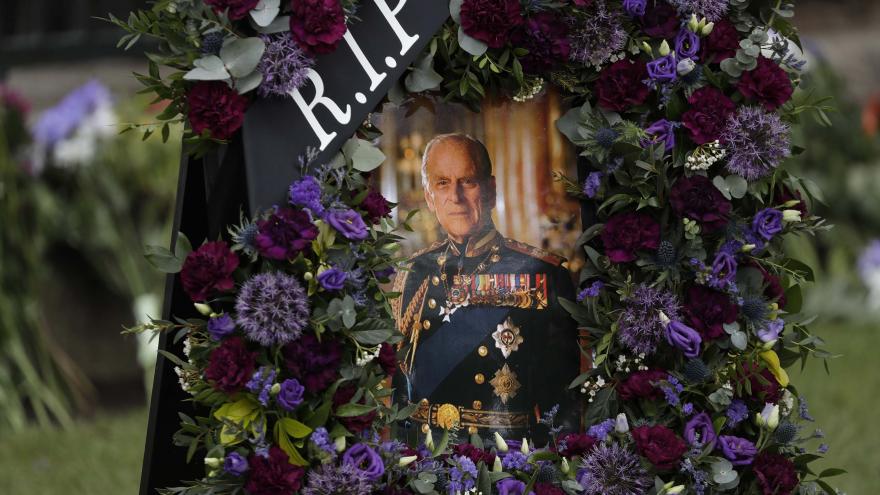 (CNN) -- Final preparations were being made on Saturday for the funeral of Prince Philip, the late husband of Britain's Queen Elizabeth II, who will be laid to rest in an intimate service attended by 30 people including members of the royal family.

Philip, also known as the Duke of Edinburgh, died at the age of 99 on April 9 in Windsor Castle. He was the nation's longest-serving consort -- the name used to describe the spouse of a reigning monarch -- and had been married to the Queen for 73 years.

His death has left a "huge void" in the "stoic" Queen's life, her son, Prince Andrew has said.

The funeral will be a "profound" moment for the Queen to say goodbye to "someone to who she was married for 73 years," Justin Welby, the Archbishop of Canterbury, told the BBC.

"She's the Queen, she will behave with the extraordinary dignity and extraordinary courage that she always does," Welby, who will be making a blessing at the funeral service, said.

Early on Saturday, the duke's coffin was moved to Windsor Castle's inner hall from the private chapel, where it been resting since the day of his death.

The service will be a muted affair, by royal standards, and will take place at St. George's Chapel, which lies within the grounds of Windsor Castle, at 3 p.m. local time (10 a.m. ET).

Those in attendance will include senior members of the royal family as well as relatives and close friends of the duke, among them Bernhard, Hereditary Prince of Baden, Penny Brabourne, Countess Mountbatten of Burma, and Prince Donatus, Landgrave of Hesse.

But while the ceremony will be limited to 30 people inside, in line with England's current coronavirus restrictions, more than 700 military personnel will provide ceremonial support outside in honor of Prince Philip's own decorated military career. Members of the Royal Navy, Royal Marines, British Army and Royal Air Force will all be in attendance.

Philip maintained close ties with the military community throughout his life after completing his naval service in 1953, including holding the position of Captain-General of the Royal Marines.

Ahead of the ceremony, the duke's coffin -- which will be draped with his personal flag, and will have his sword, naval cap and a wreath of flowers laid on top -- will be taken to the chapel from Windsor Castle in a procession led by the Band of the Grenadier Guards.

In keeping with the duke's wishes, the coffin will be carried by a modified Land Rover, which he helped design.

The vehicle will be followed in a procession on foot by senior members of the family, including Prince Charles, Princess Anne, Prince Andrew, Prince Edward, Prince William and Prince Harry. They will all be dressed in civilian clothes.

Some of the duke's closest aides, including his private secretary and personal protection officer, will also walk in the procession.

Prince Harry's wife Meghan, the Duchess of Sussex, who is pregnant with the couple's second child, will not be in attendance after her doctor advised against international travel.

The Queen will arrive at the chapel separately, attended by a lady in waiting.

A life of service

Guns will be fired at one-minute intervals and the curfew tower bell will toll ahead of the funeral service, while a national minute's silence will mark its beginning.

Inside the chapel, all members of the congregation will wear a face covering, as dictated by public health rules.

The duke was intimately involved in planning his own funeral service, selecting the music and making sure the ceremony reflects his military affiliations and personal interests.

The service will be conducted by the Dean of Windsor, the Right Reverend David Conner, and the archbishop of Canterbury Welby and is expected to last for 50 minutes. Among the readings will be Ecclesiasticus 43 and John 11.

A four-person choir accompanied by the organ will sing pieces selected by the duke, including Benjamin Britten's "Jubilate in C," a piece he commissioned for the St George's Chapel Choir. In line with the coronavirus restrictions, the congregation will not sing along with the choir.

The choir will also sing an adaptation of Psalm 104, which the duke requested to be set to music by William Lovelady. The piece was sung at a concert celebrating Prince Philip's 75th birthday.

The Dean will then give the commendation and the duke's coffin will be lowered into the Royal Vault, where many members of the royal family have been laid to rest. The vault, set beneath the chapel, was built by George III, who is one of several kings buried within.

The vault will not be Philip's final resting place. When the Queen dies, he will be transferred to the King George VI memorial chapel to lie next to her.

At the duke's request, the end of the funeral service will be marked by the Buglers of the Royal Marines sounding "Action Stations," an announcement that would traditionally be made on a naval warship to signify that all hands should go to battle stations.

The archbishop of Canterbury will then pronounce the Blessing. The ceremony will then conclude with the national anthem.

Tributes to Prince Philip have poured in from well-wishers around the world, many of whom have remarked on the duke's extraordinary life and his service to the Queen.

Born in 1921 in Greece as Prince Philip of Greece and Denmark, his family was forced into exile when the Greek monarchy was overthrown by a military revolt when he was still a baby.

He joined the Royal Navy in 1939, the same year he first met Elizabeth, and served during World War II. They married in 1947 and, following the Queen's accession to the throne in 1952, he gave up his rank of lieutenant commander to support her in her royal duties.

He played an active role in the royal family before he retired from public engagements in 2017.

The royal family entered a two-week period of mourning following his death, and many broadcasters in the UK postponed key programs as a mark of respect.

Speaking of his grandfather after returning to the UK last week, Prince Harry said he was "a man of service, honor and great humor ... with a seriously sharp wit."

Harry's brother William, the Duke of Cambridge, said Prince Philip was an "extraordinary man and part of an extraordinary generation" with an "infectious sense of adventure."