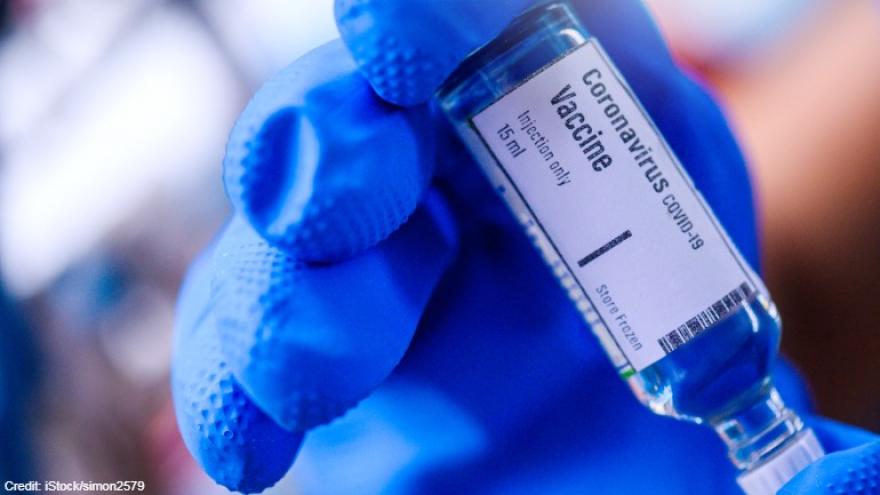 (CNN) -- The United Kingdom has become the first Western nation to approve a Covid-19 vaccine, a landmark moment in the coronavirus pandemic that paves the way for the first doses to be rolled out across the country next week.

"Help is on the way," Health Secretary Matt Hancock announced Wednesday morning, after UK regulators granted emergency authorization for a vaccine made by US pharma giant Pfizer and its German partner BioNTech.

A final analysis of the Phase 3 trial of Pfizer's vaccine shows it was 95% effective in preventing infections, even in older adults, and caused no serious safety concerns, the company said last month.

The announcement means the UK has vaulted past the United States and European Union in the race to approve a vaccine, months into a pandemic that has killed almost 1.5 million people worldwide.

"It's the start of the end of the pandemic," BioNTech CEO Ugur Sahin told CNN in an exclusive interview on Wednesday. Pfizer CEO Albert Bourla hailed the emergency authorization as "a historic moment in the fight against Covid-19."

The UK has ordered 40 million doses of the vaccine -- enough to vaccinate 20 million people. Hancock told the BBC that an initial 800,000 doses would be delivered from Pfizer's facilities in Belgium to the UK next week, and "many millions" more before the end of the year.

Elderly people in care homes, those who care for them, health workers and other vulnerable people will be top of the priority list.

The vaccine has been rolled out at extraordinary speed, from conception to approval in around 11 months, according to BioNTech. The process usually takes years. Prime Minister Boris Johnson called the news "fantastic" in a tweet, adding that "it's the protection of vaccines that will ultimately allow us to reclaim our lives and get the economy moving again."

The UK health department said the approval "follows months of rigorous clinical trials and a thorough analysis of the data" by the Medicines and Healthcare products Regulatory Agency (MHRA), which had "concluded that the vaccine has met its strict standards of safety, quality and effectiveness."

MHRA chief Dr. June Raine insisted that "no corners have been cut" during a news conference Wednesday. Raine said the clinical trials were "overlapping" to progress the process faster. "Separate teams have been working in parallel to deliver this review," she added.

"Good news, we have a vaccine that is safe and effective," Vaccine and Immunization committee chair Wei Shen Lim added.

How the vaccine will be rolled out

The Pfizer/BioNTech vaccine employs a new approach to making vaccines that uses a piece of genetic material called messenger RNA to prompt the body to make synthetic pieces of the coronavirus and stimulate an immune response. But mRNA is very fragile, so the vaccine must be kept at ultracold temperatures, meaning special storage equipment is required.

Speaking to Sky News, Hancock said there would be "a combination of three modes of delivery." The first will be hospitals, with 50 set up to handle the vaccine and waiting to receive doses. This will be followed by vaccination centers, which he said were being set up now, before a "community rollout" including doctors' offices and pharmacists.

But he noted the need for the Pfizer vaccine to be stored at minus-70 degree Celsius (minus 94 Fahrenheit) temperatures -- unlike Oxford University and AstraZeneca's vaccine, which has not yet been approved.

"They'll [doctors and pharmacists] also be there should the AstraZeneca vaccine be approved, because that doesn't have these cold storage requirements and so is operationally easier to roll out, but I just want to thank all of the scientists at BioNTech and Pfizer, who are manufacturing this who we've worked so closely with."

The rollout will start with people in nursing homes and their carers, followed by those aged 80 and over and frontline health and social workers. It will then filter down to the general public by age, with older groups coming first. Individuals with underlying health conditions that make them vulnerable to the virus will be able to receive the shot after the over-65 group is vaccinated.

"It's according to clinical need," Hancock told the BBC. "The goal is to save as many lives as possible and stop hospitalizations." Hancock urged Britons to listen to doctors, nurses and "expert voices, those who've been involved in this program and listen to the independent regulator."

Hancock also noted that the vaccine has to be given in two doses 21 days apart, so the process will take time. The vaccine should be available at designated sites in England, seven days a week from 8 a.m. to 8 p.m. including holidays, the UK health department has instructed the national public health agency.

The brief said the ambition was "to safely vaccinate the maximum number of patients in the minimum amount of time" across a range of centers. Practices will be told to deliver "a minimum" of 975 vaccinations per week and to assume each person will need to return for a second dose.

At a news conference with BioNTech executives in Mainz, Germany, Sahin said full immunity against Covid-19 would occur seven days after a patient's second dose.

Sean Marett, BioNTech's chief commercial officer, said doses for the UK were currently being packed very quickly at the Pfizer facility in Belgium. Thermoboxes are being packed with between 1,000-5,000 doses, which they will ship by truck or plane. The boxes are temperature controlled with a tracker to provide minute-by-minute updates before delivery to a site for distribution.

Speaking to CNN after the news conference, Sahin raised the possibility of herd immunity by next autumn.

"I personally believe with a number of companies now reaching the approval in the next few months, we might be able to deliver a sufficient number of doses until the end of summer 2021 to reach the 60 to 70% of coverage, which could give us the relief to have a normal winter in 2021."

More vaccines on the way

The UK approval will be a welcome moment for the government, which has been roundly criticized for a string of failures that have contributed to a death toll of nearly 60,000 -- Europe's highest.

But officials were quick to warn that the threat was far from over.

"To aid the success of the vaccination program it is vital everyone continues to play their part and abide by the necessary restrictions in their area so we can further suppress the virus and allow the NHS to do its work without being overwhelmed," a spokesperson from the UK health department said in a statement.

The news of the UK authorization could also cause a bit of a stir in the United States. Earlier this week, President Donald Trump privately demanded to know why the Food and Drug Administration hadn't granted emergency use for Pfizer's vaccine yet, two sources told CNN.

Another vaccine, from US biotech firm Moderna, is awaiting approval in various countries, including the US and UK. The company expects to have 20 million doses available in the US by the end of the year and 500 million to 1 billion in 2021. The UK has secured 7 million doses of Moderna's vaccine, which is set to be available in Europe in spring 2021. Moderna has also submitted its vaccine to the EMA in Europe, which will look at it on January 12.