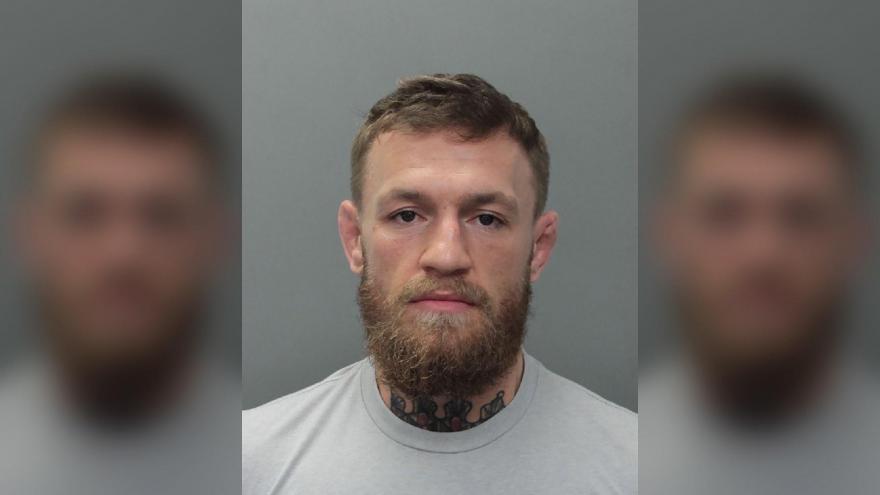 The fan and McGregor were leaving the Fontainebleau Miami Beach hotel Monday morning when the fan tried to take a picture with the fighter with a cell phone, according to a police report. McGregor then slapped the phone out of the fan's hand and stomped on the phone several times.

Police say McGregor picked up the phone and walked away with it. The fan said the phone was valued at $1,000.

McGregor was arrested on charges of felony strong-armed robbery and criminal mischief.

CNN has reached out to McGregor's press team, the victim and the UFC.

McGregor was previously handed a six-month suspension and fined $50,000 after an October post-fight brawl with Khabib Nurmagomedov, who scaled the octagon to launch an attack on McGregor's team after defeating the Irishman to maintain his unbeaten 27-0 record last year.

Members of Nurmagomedov's team were also involved in a fracas with the beaten McGregor.

Last April, McGregor was charged with assault, attempted assault and criminal mischief after he and others allegedly attacked a bus carrying UFC fighters at the Barclays Center in Brooklyn.

The incident left at least two athletes injured and unable to fight at the UFC 223 event two nights later.

Correction: This story has been updated to reflect that the fights the two athletes missed were scheduled two days later.