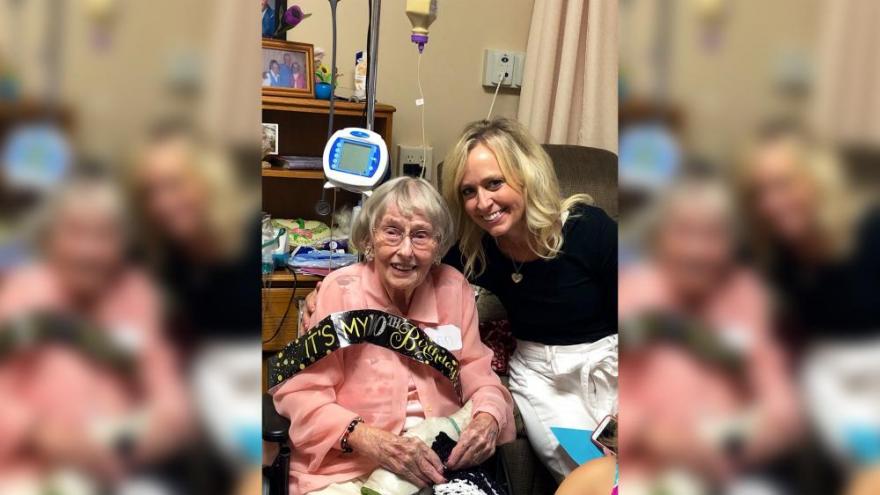 (CNN) -- Uber driver Jesus Florentino was expecting a typical airport pickup on Saturday, but he ended up going on a 400-mile road trip to get his passengers to their aunt's 100th birthday party.

Sisters Kerry Maggard and Deb Eggers were stuck at the Minneapolis airport after they missed their connection to Sioux Falls, South Dakota, because of a storm. All of the later flights were sold out and they couldn't get a rental car.

"We were really scrambling at that point," Maggard told CNN.

Their Aunt Ann's party was in the tiny town of Edgerton, Minnesota, which was about 200 miles away, so in desperation, they tried to get an Uber.

"I was shocked that anyone picked it up. It was kind of a last resort to see if anyone would consider it," she said. "It was picked up immediately and of course I got the message on the phone which said 'Jesus is 7 minutes away, which was quite a shock.'"

Maggard said she didn't expect the answer to her prayers to be quite so literal.

Florentino says he's heard that sentiment a lot in the almost three years he's been driving for Uber.

He said he couldn't see the destination when he accepted the ride and the women double-checked with him to make sure he was willing to drive so far.

"I feel that they need to be attending the birthday and I enjoy driving, so yeah, it worked out well," he told CNN. "It's an important occasion, and if I was in their place I would appreciate very much someone bringing me there when there was no other way."

Maggard said he was incredibly kind.

"He was just so sweet and without hesitation he said, 'I'm a driver, that's what I do. I'll take you,'" she said.

It took four hours to get there, which gave the sisters a chance to catch up. Florentino said he enjoyed listening to music and looking at the scenery.

They reached their destination, at about 6 p.m.

"The party had been over for an hour, but everyone was there," Maggard said. "All my cousins, they were aware of my situation, so they extended the party time and we arrived in time to see everyone and then spend some good quality time alone with my aunt."

"Considering the importance of being there it was a very small amount to pay," she said.

Once he dropped off his passengers, Florentino turned around and made the 200-mile return trip. Nobody needed a ride back to Minneapolis, so he had four hours to think and listen to music while he drove.

"Driving for me is like watching a movie. You're in the front row seat and the scenery is changing. The only difference is that you're in the movie," he said.

He got home at about 10 p.m. and was tired but refreshed.

Florentino has driven more than 6,000 customers, and this was, by far, his longest trip. His shortest happened on Monday night.

"There is a hotel at the airport and the rider didn't know how to get to the hotel, because it was late at night," he said. "So I had to drive him around, just under a mile."

"With Uber you never know," he said with a laugh.