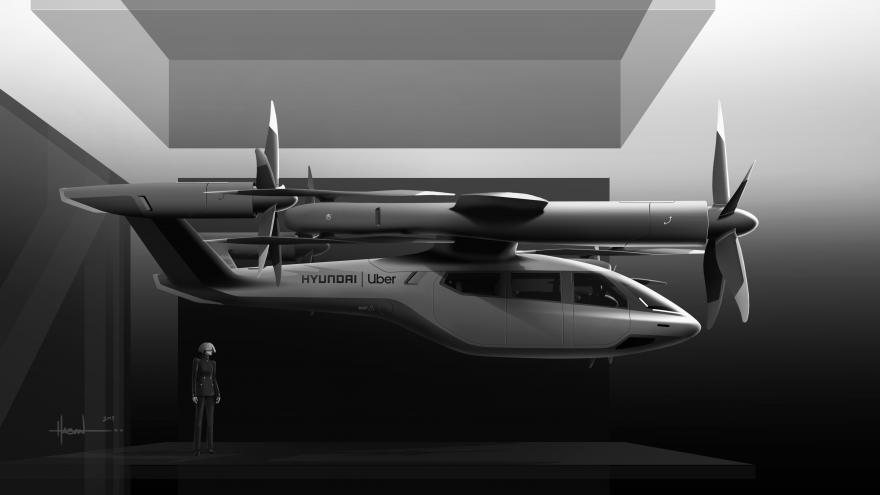 (CNN) -- Uber and Hyundai unveiled a flying taxi that may eventually transform your ride-sharing trips.

At the Consumer Electronics Show in Las Vegas Monday, the two companies revealed a model of a four-seat, electric flying vehicle that they said you'll be able to summon for a ride through Uber's app someday. The first actual prototype will be ready in 2023, according to a Hyundai spokesperson. A human pilot will fly the air taxi until the companies finalize software to autonomously control it, the company said.

Hyundai is the latest big company to announce that it's developing a flying taxi for trips around cities and suburbs. Boeing's flying car prototype made its first autonomous flight in 2019 at a small airport outside Washington D.C. Google co-founder Larry Page has invested in several smaller startups, including Kitty Hawk and Opener, which are developing flying car technologies.

In October, Hyundai appointed Jaiwon Shin, a longtime NASA administrator, to lead its newly created air taxi division. Hyundai's partner in the venture, Uber, has said it expects to have an air taxi network in 2023. Uber already has partnerships with the helicopter manufacturer Bell and the Brazilian aerospace manufacturer Embraer. But experts say the estimate is aggressive.

"It's going to be a while," said William Crossley, a Purdue University professor who researches aerospace design. "If things go well, it's certainly plausible in the next 10 years."

There are plenty of tough hurdles ahead. Software to safely fly air taxis must be developed. The industry will have to determine the right vehicle design. Batteries powering air taxis will need to deliver better range than currently available. And companies will have to prove that air taxi rides can be a viable business.

Sanjiv Singh, a Carnegie Mellon University professor and CEO of Near Earth Autonomy, a startup developing software for air taxis, doesn't expect they will be viable until they're flying autonomously. It's expensive to pay a human pilot, he said,and companies can become more profitable if they can cram another passenger into the air taxi instead.

On top of those challenges, the Federal Aviation Administration will need to certify the vehicles, a process that could take years.

Hyundai and Uber have not yet completed a test flight of the new vehicle.

In the meantime, Uber is offering human-piloted helicopter rides in Manhattan.

Singh, who worked on self-driving cars before shifting to air taxis, says that autonomous flying vehicles are easier to develop in some respects.

"When flying, just stay away from everything," Singh said. "You don't have to figure out if that's a tumbleweed or a suitcase in the street."