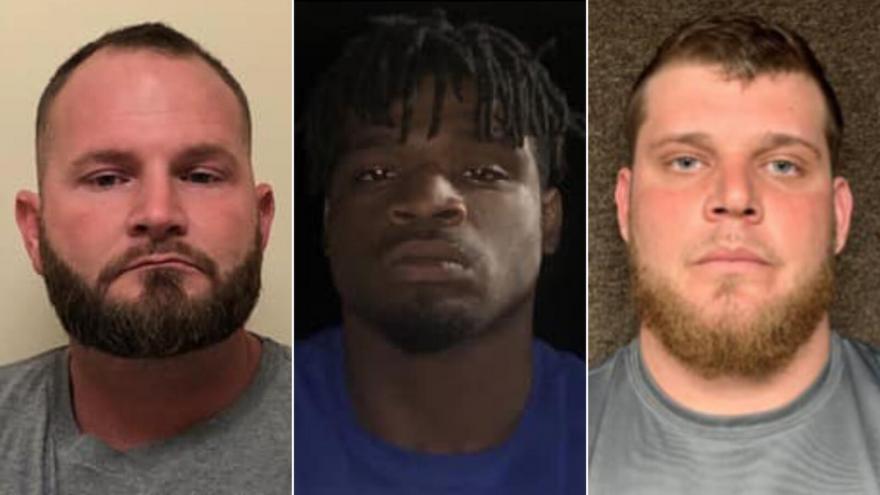 Beaux Cormier, Dalvin Wilson, and Andrew Erskin (left to right) were each charged with two counts of first-degree murder.

(CNN) -- Three men from Louisiana are facing murder charges after two women -- including the sister of one of the men -- were killed in a murder-for-hire plot gone wrong, according to Terrebonne Parish Sheriff Tim Soignet.

At a news conference Monday, the sheriff said Beaux Cormier hired Andrew Eskine and Dalvin Wilson to kill a rape victim who was set to testify against him.

In a news release, the sheriff's office said that Cormier, 35, of Kaplan; Eskine, 25, of Carencro; and Wilson, 22, of Rayne traveled to Montegut to do surveillance on the residence and had, on a prior occasion, attempted to carry out the killing but were unsuccessful.

Montegut is about 70 miles southwest of New Orleans.

On January 13, Wilson went to the home in Montegut and asked for the rape victim by name. Brittany Cormier, Beaux's sister, told the shooter that it was her, in an attempt to protect the victim, the sheriff said, noting that she was "accepting her fate to save the life of the actual victim."

Brittany Cormier was shot along with her neighbor, Hope Nettleton, who was visiting and had tried to fight off the shooter, according to Soignet. Both women died at the scene. Neither was the person the suspects were hired to kill, according to the sheriff.

"We don't get these types of things happen, double homicides, in Terrabonne Parish," the sheriff said. "Especially, Montegut, (it's) is a small town."

He added: "There were good people that ended up dying."

Although Eskine was not at the scene of the crime, he is being charged in the killings because he facilitated the vehicle and helped make the plan, the release said.

"This really hit that community hard so we worked real hard to bring peace to the families and the community," the sheriff said of the arrests.

It is unknown whether any of the suspects have an attorney. The criminal complaint is not yet available, the sheriff's office told CNN.

Terrebonne Parish District Attorney Joseph Waitz told reporters that he was in the process of scheduling a meeting with the victims before deciding on whether to seek the death penalty in these cases, though, he said, the death penalty is "absolutely on the table."

According to a Tuesday news release, the suspects are in the Terrebonne Parish jail. They are being held without bond, the sheriff's office says in the release. Previously, bond had been set at $2 million each.