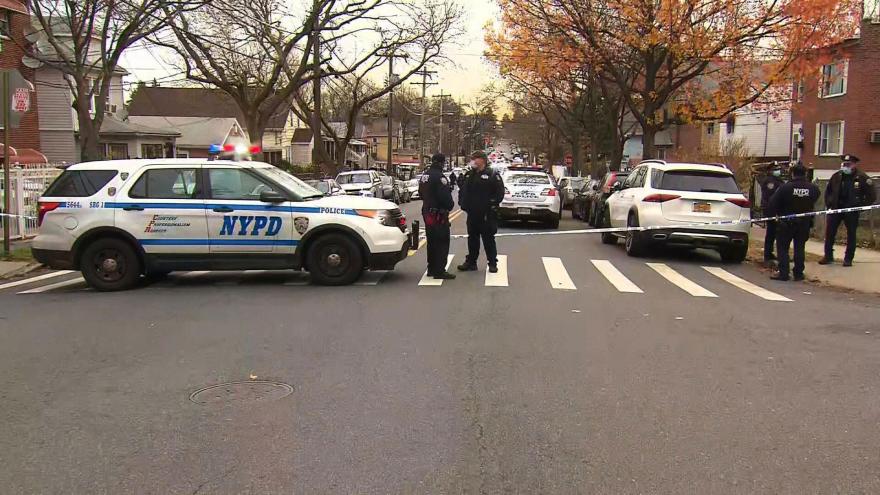 Law enforcement near the scene of a shooting in the Bronx.

(CNN) -- A suspect is dead after a confrontation in the Bronx Friday morning in which two US marshals were shot and wounded, according to law enforcement officials.

The marshals are in "OK condition," with injuries not considered life threatening, the officials said. A detective with the New York Police Department, which was assisting the US marshals in a backup role, suffered a leg injury.

A gun was recovered near the suspect, who was wanted in connection with the wounding of a Massachusetts state trooper, authorities said.

The US Marshals Service identified the suspect as 35-year-old Andre Sterling, who was killed in the exchange of gunfire.

The suspect allegedly shot the Massachusetts trooper in the hand and torso on November 20 on Cape Cod.

The marshals were executing an arrest warrant about 5:30 a.m. when the gunfire erupted on Ely Avenue in the Wakefield section of the Bronx.

The deputies are part of the New York/New Jersey Regional Fugitive Task Force, according to the marshals service.

Sterling was recently tracked to a Bronx apartment, according to the Massachusetts State Police.

The suspect was wanted in connection with the November 20 shooting of Massachusetts State Trooper John Lennon during a traffic stop, according to a state police wanted poster.

The trooper was released from the hospital on November 23 and remains on injured leave while he recovers, the state police said.

Sterling had two additional warrants for charges that included identity theft and assault and battery on a police officer. He was also wanted in Wyoming on narcotics charges, according to the state police.

Friday's shooting is being investigated by authorities in New York.