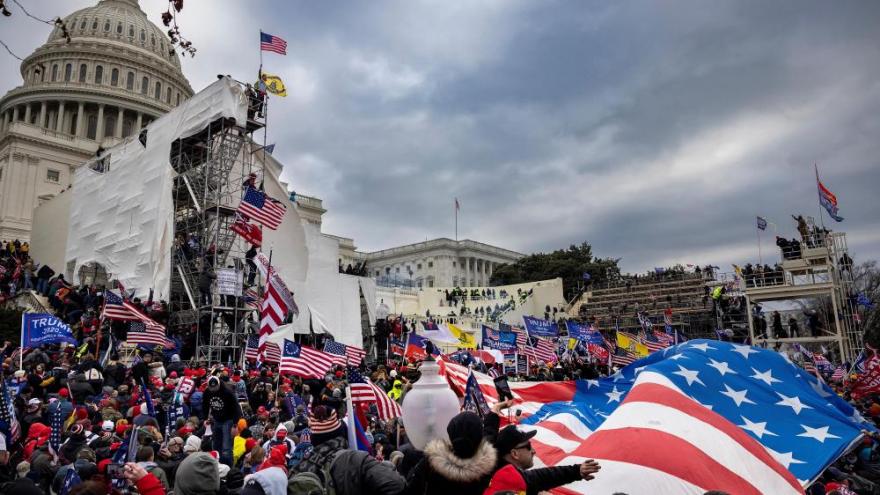 Two US Capitol Police officers who say they were injured during the January 6 insurrection, seen in this photo, are suing former President Donald Trump for inciting the crowd.

(CNN) -- Two US Capitol Police officers who say they were injured during the January 6 insurrection are suing former President Donald Trump for inciting the crowd.

The officers -- the first police to sue in court following the riot -- say they suffered physical and emotional damages because Trump allegedly "inflamed, encouraged, incited (and) directed" the violent mob that stormed the Capitol.

Capitol Police Officers James Blassingame and Sidney Hemby, who have been with the force for a combined 28 years, said they were injured during the attack. Hemby "was crushed against the doors" of the Capitol, was "sprayed with chemicals" and bled from his face, the lawsuit says. Blassingame claims he was slammed against a stone column, injuring his head and back.

Each of the officers are seeking at least $75,000 in damages. They accuse Trump of aiding and abetting their assaults and directing his supporters to assault them, according to their new complaint.

Trump hasn't yet responded to the lawsuit, which was filed in federal court in Washington, DC. He has previously denied any responsibility for the violent attack and falsely claimed last week that the rioters posed "zero threat" and were "hugging and kissing the police" at the Capitol.

The lawsuit from Blassingame and Hemby also describes the sheer terror that the officers felt inside the Capitol, while they were vastly outnumbered by the armed pro-Trump mob. The lawsuit says Blassingame now suffers from depression and that the "severe emotional toll ... continues to reveal itself."

Blassingame "is haunted by the memory of being attacked, and of the sensory impacts -- the sights, sounds, smells and even tastes of the attack remain close to the surface," the lawsuit says. "He experiences guilt of being unable to help his colleagues who were simultaneously being attacked; and of surviving where other colleagues did not."

The lawsuit also claimed that Blassingame was called a racial slur throughout the assault, saying, "He lost count of the many times the racial slur was hurled at him."

This is the third major civil lawsuit that is trying to hold Trump liable for the insurrection, after two Democratic lawmakers filed lawsuits against Trump and others, attempting to hold the President and other speakers accountable for his words and his supporters' actions. The lawsuits are all in their earliest stage, and Trump's lawyers have not yet responded in court.

The two officers declined to comment further about their allegations.

"The insurrection was a traumatic event and hard to relive, especially for people not used to being in the public eye," their lawyer, Patrick Malone, said in an email.

Malone later told CNN's Jim Sciutto on "AC360" Wednesday night, "Our guys are just regular police officers who were not just physically hurt, but just were stunned at this whole thing when they were attacked over and over and over by people who told them, 'Hey, we came from the President and you should join us.'"

"They think there should be some legal accountability for what Trump did wrong here," he said of his clients.

Malone added that "our civil justice system is a powerful weapon for truth and for accountability."

"You can get a lot of discovery in a civil case that does not happen in criminal court nearly as well," he said. "The facts get laid out, we take depositions, we find out exactly what was going on in the White House when all these events were happening at the Capitol and why it was that the rioters were not called off until they had hurt so many people."

The Justice Department has said dozens of police officers were hurt during the hours of violence and are pursuing criminal cases against many of the rioters.

This story has been updated with additional comments from the officers' lawyer Wednesday.