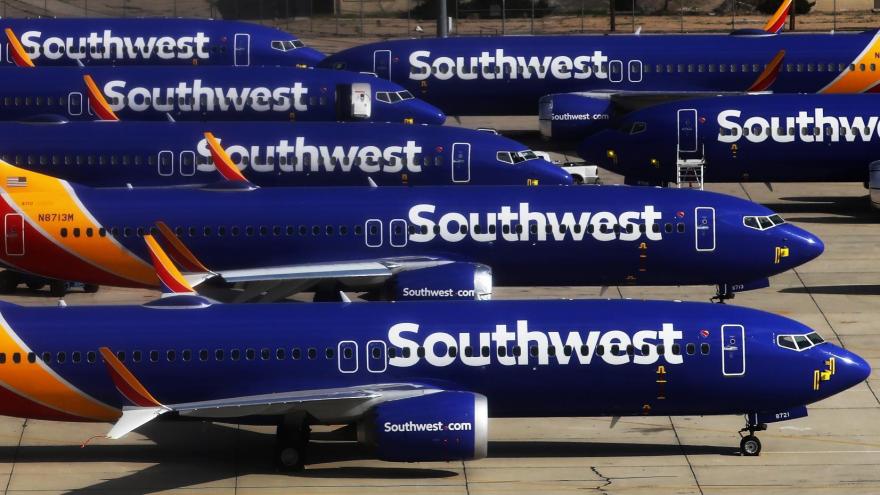 Renee Steinaker, a Southwest Airlines flight attendant says two pilots live streamed video from a hidden camera in a commercial airliner's lavatory to an iPad in the cockpit, a lawsuit says.

(CNN) -- A Southwest Airlines flight attendant says two pilots live streamed video from a hidden camera in a commercial airliner's lavatory to an iPad in the cockpit, a lawsuit says.

The alleged incident happened February 27, 2017, while Renee Steinaker was working on Flight 1088 from Pittsburgh to Phoenix, according to the complaint that Steinaker and her husband, David Steinaker, filed against the airline and the pilots.

After Steinaker arrived and Graham left, Steinaker spotted an iPad in the plane's cockpit that appeared to be streaming live video of the pilot inside an airplane lavatory, the lawsuit said.

When the flight attendant asked the co-pilot, Ryan Russell, whether the iPad was streaming video from the lavatory, he said the camera was part of a "new security and top secret security measure that had been installed in the lavatories of all Southwest Airlines' 737-800 planes," the document alleges.

Russell asked her not to tell anyone about the cameras because they were on the "downlow," the suit says.

In their written response to the complaint, Graham and Russell admit Graham's iPad was located in the cockpit and that Steinaker asked if it was live streaming from the bathroom. But the pilots deny the other allegations or say they don't have sufficient knowledge to respond.

CNN has reached out to the attorneys representing Russell and Graham.

In its written response, Southwest denied Graham or Russell "intentionally invaded the privacy of Plaintiff Renee Steinaker on Southwest Airlines flight 1088 by installing, viewing, watching, recording and/or playing recordings of plaintiff while she was using the forward lavatory's toilet."

Southwest Airlines told CNN it would "vigorously defend the lawsuit," adding that officials investigated the allegation two years ago and found that there was "never a camera in the lavatory." Without elaborating, the airline said: "The incident was an inappropriate attempt at humor which the company did not condone."

"The safety and security of our Employees and Customers is Southwest's uncompromising priority. As such, Southwest does not place cameras in the lavatories of our aircraft," a spokesperson told CNN.

The lawsuit was filed in Maricopa County, Arizona, but has been moved to US District Court in Arizona. The Steinakers are suing the airline and the pilots for invasion of privacy, causing Renee Steinaker emotional distress, sexual harassment and retaliation. They are seeking at least $50,000 in damages.

Steinaker says she took a picture of the iPad with Graham's image in the lavatory, the lawsuit says, and showed it to the rest of the flight attendants. CNN has not seen the photo mentioned in the lawsuit.

The flight attendant says she was directed by a supervisor to keep the incident to herself because "If this got out, if this went public, no one, I mean no one, would ever fly our airline again," the lawsuit said.

After Steinaker and other flight attendants on Flight 1088 reported the incident to the airline's management, the lawsuit says, the airline tried to silence and intimidate them.

They were randomly tested for drug and alcohol and one of them had to do multiple drug tests in a "very short period of time," according to the lawsuit.

Steinaker's husband, David, who is also a flight attendant, was "subjected to at least five performance audits in the course of a few months following the incident, when in his prior twenty-four (years) of service, he only had approximately three audits," the lawsuit alleged.

In its written response, Southwest also denies those allegations about how the airline treated the Steinakers after the alleged incident.

"The cockpit of a commercial airliner is not a playground for peeping toms," Goldman told CNN. "Every day that these two pilots are allowed to fly for the airline is another day that our client fears she will have to work with pilots she alleges have caused her significant harm."

Goldman said Renee Steinaker has missed several days of work and became physically ill after worrying that she could have been watched and possibly recorded while using the bathroom.