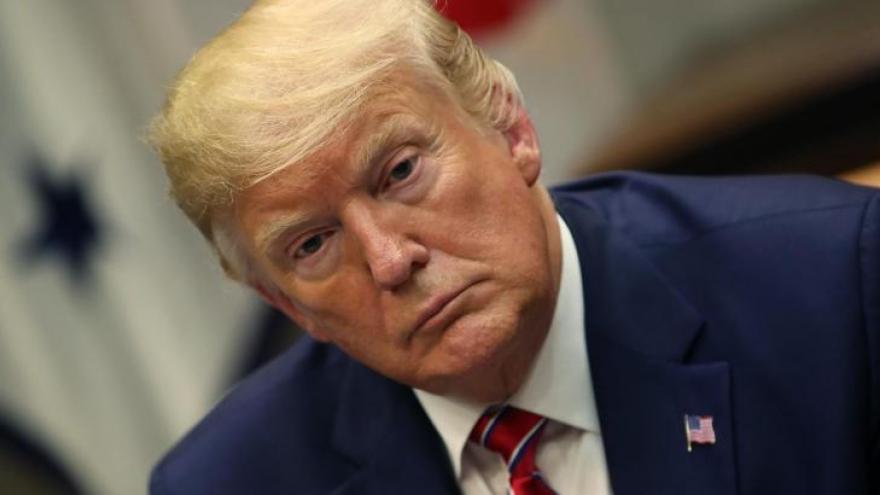 Two Republican senators said Tuesday the rape allegation made against President Donald Trump by writer E. Jean Carroll should be explored to determine the veracity of the allegation against the President -- even as many Senate Republicans sidestepped questions over the matter and defended Trump.

(CNN) -- Two Republican senators said Tuesday the rape allegation made against President Donald Trump by writer E. Jean Carroll should be explored to determine the veracity of the allegation against the President -- even as many Senate Republicans sidestepped questions over the matter and defended Trump.

Sen. Joni Ernst of Iowa said both Trump and Carroll should be questioned about the alleged assault.

"I think anybody that makes an accusation like that, they should come forward," Ernst said when asked if Carroll should be believed. "But obviously there has to be some additional information. They need to interview her. They need to visit with him."

Sen. Mitt Romney of Utah said there needs to be an "evaluation" but that he didn't know what entity should conduct it, "whether it's Congress or whether it's another setting, I'm not sure."

"It's a very serious allegation," Romney said. "I hope that it is fully evaluated. The President said it didn't happen and I certainly hope that's the case."

The second-ranking senator in GOP leadership, Sen. John Thune of South Dakota, called the alleged acts "unacceptable, deplorable behavior" but said because "the President is denying them, I can't comment on them because I don't know what the truth is."

When Sen. Lindsey Graham, a South Carolina Republican and ally of Trump's was asked about the rape charges, he paused, took a deep breath and shook his head. Then he said, "He's denied it, and that's enough for me. Until somebody comes up with something new."

Asked if he is concerned about a pattern of charges against Trump, Tillis turned his focus to allegations of sexual assault that almost sank now-Supreme Court Justice Brett Kavanaugh's confirmation last year.

"I remember a pattern of conduct the press tried to conjure with Brett Kavanaugh that much of it proved to be incorrect," Tillis said. "I'm not going to judge based on media reporting. If I have facts in front of me to the contrary, then that would be a different discussion."

There was no criminal investigation into Kavanaugh because his accuser Christine Blasey Ford did not file a criminal complaint, though Kavanaugh denied any wrongdoing.

Many other Republican senators questioned by CNN in the Capitol said they were unaware of the allegations revealed in a book by Carroll and first made public by a New York Magazine story of the account that came out late last week, or the press coverage since, including a lengthy interview on CNN's "New Day" Monday when Carroll spoke in graphic detail about the alleged incident 23 years ago in a fitting room of a Bergdorf Goodman department store in New York.

Trump has denied the allegations, resurrecting an old defense in telling The Hill that "I'll say it with great respect: Number one, she's not my type. Number two, it never happened. It never happened, OK?"

"I don't have any comments on that," said Senate Majority Leader Mitch McConnell when asked if it was appropriate for Trump to say the alleged victim wasn't his type.

"I'm paying attention to (the National Defense Authorization Act), so I'm focused on getting that bill done," said Sen. Deb Fischer, a Republican from Nebraska referencing the defense authorization bill that's on the floor now.

"I don't know what case you're talking about," said Sen. Marco Rubio, a Republican of Florida. "I've been reading about policy. You're asking about a story that I've never even read."

"I haven't followed those. I don't know anything about them," said Senate HELP Committee Chairman Lamar Alexander, a Republican from Tennessee.

"I'm not going to comment," said Sen. John Cornyn, a Republican of Texas.

"I have no comment on it," said South Carolina GOP Sen. Tim Scott. "I haven't taken the time to read anything about that yet."

Sen. Marsha Blackburn, a newly elected Republican from Tennessee, refused to respond, waving off with her hand a reporter who was asking her a question about it as she entered a Republican lunch.