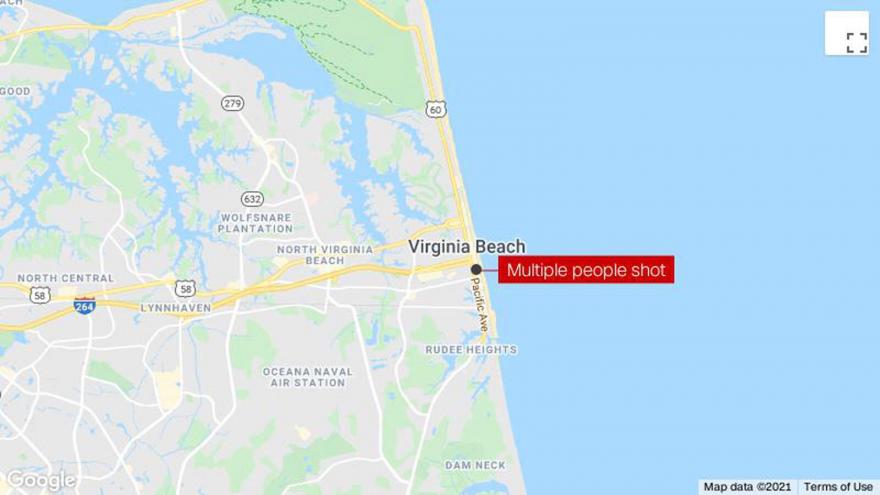 Two people were killed and at least eight were injured during shooting incidents in Virginia Beach on March 27.

(CNN) -- A man who was fatally shot three days ago by a Virginia Beach police officer was wielding a handgun, the department said Monday in a news release.

Donovon Lynch, a 25-year-old Black man, died Friday night after he was shot in the torso and thigh, according to a news release from the Virginia Office of the Chief Medical Examiner.

Police said the officer, who has yet to be identified, and another officer told homicide detectives that Lynch had a handgun when he was shot.

The weapon was recovered, and a witness said Lynch had the gun earlier in the evening, police said.

"The loss of these lives is a tragedy beyond measure. My cousin Donovon was killed during the shootings. He was a bright light and someone who always showed up for others," Williams said on Instagram.

"It is critical my family and the other victims' families get the transparency, honesty and justice they deserve. Virginia Beach is the epitome of hope and tenacity and, as a community, we will get through this and come out even stronger," Williams wrote.

The incident wasn't recorded by the officer who fired the fatal shots.

"The officer was wearing a bodycam, but for unknown reasons at this point in time, it was not activated," Virginia Beach Police Chief Paul Neudigate said at a news conference Saturday night.

"I do not have the answers that the community is looking for in regards to this death right now," Neudigate said.

Lynch was killed in the 300 block of 20th Street, a block away from where 28-year-old Deshayla Harris was hit by a fatal shot, according to police.

The officer involved in the man's fatal shooting was placed on administrative assignment during a criminal investigation, which is standard procedure, according to police. He has been with the department for five years.

The Virginia Beach Office of the Commonwealth's Attorney told CNN on Monday it will use its own investigators to look into the shooting.

Macie Allen, public information officer with the Office of the Commonwealth's Attorney, wrote in an email: "The police department conducts their own investigation and provides us with their findings. We then review both investigations and determine whether or not charges are appropriate."

The officer will be interviewed by the Commonwealth's Attorney's office, Allen said.

Once criminal investigations are completed, the police department's internal affairs unit will conduct a policy and procedures review, officials said.

In addition to the shootings in which Lynch and Harris were killed, another incident Friday night saw multiple people hit by gunfire. Police initially were responding to that scene when they heard more shots.

Three people have been arrested in connection with the first shooting, which appeared to have resulted from a fight among a group of people on Atlantic Avenue, police said in a news release Saturday afternoon.

Three men, ages 22, 20 and 18, were arrested and each charged with seven counts of felonious assault, use of a firearm in commission of a felony and reckless handling of a firearm in connection with this incident, according to police. No one died during the first shooting on Atlantic Avenue, police said.

The three shootings are unrelated, and there were a total of 10 victims, including the two who died, police said.

Neudigate said police think Harris, who died about a quarter mile away from the first scene, was "an innocent victim probably struck by stray gunfire."

Lynch also was shot nearby and died from his wounds at the scene, police said.

Sen. Tim Kaine, a Democrat from Virginia, said his "heart is with Virginia Beach today" on Twitter.

"I feel sick at the news of yet another senseless mass shooting -- in a community already scarred by the scourge of gun violence," he said. "We cannot stand by as more families lose loved ones. The time for Congress to act on gun violence is NOW."

Correction: An earlier version of this story misspelled the first name of victim Donovon Lynch.