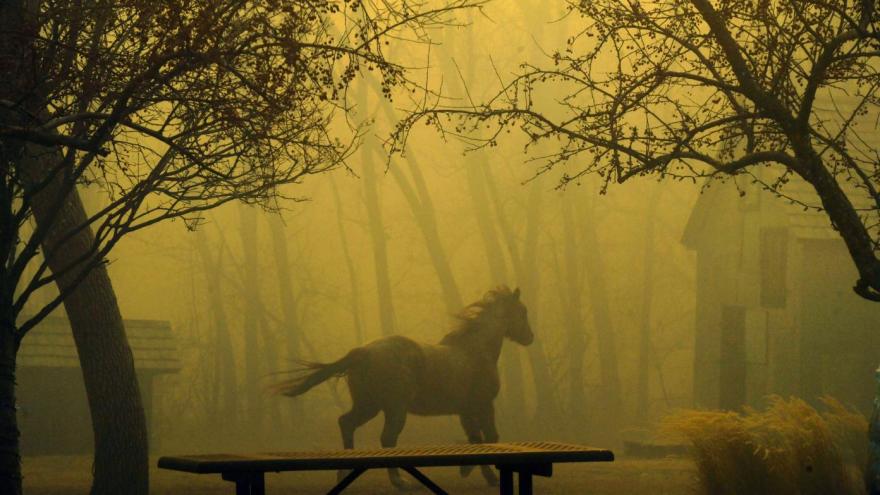 A horse runs through Grasso Park as smoke from nearby fires obscures visibility, on December 30, 2021, in Superior, Colorado.

"We have two missing people still," Boulder Office of Emergency Management spokesperson Jennifer Churchill said Saturday. The office "will continue to investigate," Churchill said. No additional information was provided about the missing persons.

The news came a day after officials said there had been no deaths as a result of blaze, which was miraculous given the Marshall Fire's speed and ferocity, they said. At the time, Boulder County Sheriff Joe Pelle said one person who had been missing Thursday night had been accounted for.

Officials flew over the affected area Friday morning to assess the damage shortly before the weather swung to the other extreme, with a cold front that dumped several inches of snow.

Subdivisions on the west side of Superior and in Old Town Superior were "totally gone," Pelle said in the news conference later that day, adding the south side of Louisville suffered "catastrophic losses" as well.

Judy Delaware's family lost their Louisville home in the blaze, escaping the fast-moving fires with not much more than their dogs and the clothes on their backs, she told CNN Saturday, as she stood with her family in the snow that's blanketed the region over the last couple days. Now the home is a "pile of rubble," she said.

"It just felt like a punch to the stomach," she said of the moment she realized her home was gone. "And this can't be real, it's just so surreal to be able to even fathom, everything you own is just gone. Gone."

Authorities announced evacuation orders Thursday as the fire quickly made its way to suburban neighborhoods. Many of those areas remain blocked off because it's "still too dangerous" for residents to return just yet, the sheriff said Friday.

"We saw still active fire in many places this morning, we saw downed power lines, we saw a lot of risk that we're still trying to mitigate," he said. "As soon as residents are able to get back, we're going to let them back. That's our goal."

The Marshall Fire was one of two blazes that started Thursday morning. Fueled by historic winds, its flames sped across drought-parched land, traveling "down a football field in a matter of seconds," Gov. Jared Polis described in a Thursday news conference.

The other fire, known as the Middle Fork Fire, was attacked quickly and "laid down," the sheriff said.

Containment of the Marshall Fire remained at 0% Friday because fighting this blaze is different, the fire's incident commander, Michael Smith, told reporters.

"This is about working around the perimeters of homes and working our way through the process," he said. "We're having to kind of change our thought process on what containment looks like," he said.

But fire officials did not expect much more fire growth as the winds died down and more snow fell. The area has seen between 5 and 8 inches of snow in the last 24 hours, CNN meteorologist Robert Shackelford said Saturday afternoon: Louisville has seen 8 inches, and Boulder had seen 8.2 inches, he said.

'A hurricane of smoke and fire'

Many of the residents in the fire's path were caught off-guard by the evacuation orders, and the rush to leave was a chaotic one, as they scrambled to grab belongings and pets before fleeing.

"They were given immediate orders to evacuate," Denver Fire Department spokesperson Capt. Greg Pixley told CNN on Friday. "People aren't prepared for that."

The Delaware family was together the day of the blaze, chatting with a friend on FaceTime when their son alerted them to the fire nearby. When they went out to take a look, they could tell things were moving swiftly.

Prescott Delaware, Judy's son, estimated the flames were about 600 yards away. "But with, like, 100 mile per hour winds," he added.

His partner, Tayler Sustello, described seeing a red and orange sky and blackening smoke, and the wind was strong enough to knock her over, she said.

"Things were moving quickly," she said. "And the sound of the wind -- it honestly just sounded like a hurricane of smoke and fire."

The family took just a few minutes to grab a handful of essentials: phone chargers, their dogs' leashes and medicine. Judy Delaware grabbed some slippers and pajamas, but she had to leave behind other belongings, like photographs of her parents.

It was overwhelming to drive away and think about all the people she knew who were affected by the fire, her daughter, Elise Delaware, said.

"Just seeing the home that you love and you are so proud of just going up in smoke is just horrible. It's horrible," she said. But she's just grateful her loved ones are safe.

Resident Hunt Frye said he was shopping for soup for his wife at a Costco in Superior when a worker suddenly told customers to evacuate, sending them running. As he drove home, Frye watched a frenzied evacuation around him, describing it as "apocalyptic-feeling."

"People were running from their houses with their pet cats and, you know, everybody was very panic-stricken," he said. "The thing that really struck me was the fear in the police officers' face(s) who were trying to kind of get traffic going. They were legitimately scared."

While no deaths had been reported by Friday, several people were treated for injuries, authorities said.

"In this kind of situation you'd expect, honestly, dozens of fatalities," Polis told CNN Friday evening. "These are thousands of people, many had five minutes to flee. It would be remarkable if there aren't any (deaths)."

Cause of blaze is under investigation

The origin of the blaze is still under investigation, the sheriff said there were power lines down where the Marshall Fire started.

"The origin of the fire hasn't been confirmed. It's suspected to be power lines but we are investigating that today and we have folks on the ground as we speak trying to pinpoint that cause," Pelle said.

"Xcel Energy has been a very responsive and invaluable partner. At this point, they have inspected all of their lines within the ignition area and found no downed power lines," Boulder OEM said in a news release.

"They did find some compromised communication lines that may have been misidentified as power lines. Typically, communications lines (telephone, cable, internet, etc.) would not be the cause of a fire," the release added.

A full investigation is ongoing, it said.