Two of the men convicted of killing Ahmaud Arbery used racist slurs in messages, a witness testifies at their federal hate crime trial 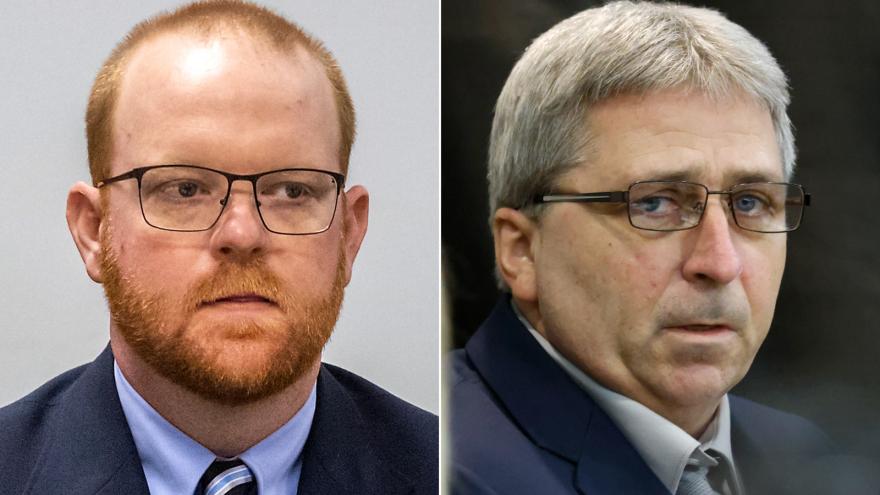 The first text message introduced into evidence was between Travis McMichael and a friend, dated March 16, 2019, in which Vaughn said they were discussing Travis' new job and why he liked that he didn't work with Black people.

"They ruin everything. That's why I love what I do now. Not a n****er in sight," McMichael said in the message, according to Vaughan.

She found messages using the n-word as well and the word, "bootlip," which she described as "Mr. Bryan's word of choice." She went on to explain that "bootlip" is a derogatory term for a Black person, referencing a stereotypical characterization of a Black person's face, in her testimony.

When a prosecutor asked her if she found evidence of racial animus against African Americans during her investigation, Vaughn said she had.

The analyst also testified about a number of messages and social media posts from Travis McMichael that came up in her investigation related to racial violence. On a Facebook video of what Vaughn described as a mob beating a White teenager, McMichael posted a public comment suggesting shooting the group of primarily Black teenagers.

The three White defendants -- McMichael, 36; his father, Gregory McMichael, 66; and their neighbor Bryan, 52 -- were convicted in November of felony murder and other charges for Arbery's February 2020 killing in the Satilla Shores neighborhood outside Brunswick, Georgia.

In this federal trial in Brunswick, the three men are each charged with interference with rights -- a hate crime -- and attempted kidnapping. The McMichaels also each face a weapons charge. The McMichaels initially agreed to plead guilty, but the judge overseeing the case rejected the plea deal because of concerns about the agreed-upon sentence. The three men have since pleaded not guilty.

Federal prosecutors and Arbery's family have said he was out for a jog when he was killed. Defense attorneys in the state trial contended the McMichaels, suspecting Arbery of burglary, pursued him through neighborhood streets to conduct a citizen's arrest. Travis McMichael argued he shot Arbery in self-defense as they wrestled over McMichael's shotgun. Bryan had pursued Arbery with his own vehicle and recorded video of the pursuit and shooting.

The defendants are already serving life sentences in prison for the murder convictions, although they have said they plan to appeal the verdicts. Convictions in this trial could bring steep fines and more life sentences.

The jury was finalized Monday morning and consists of eight White jurors, three Black jurors and one Hispanic juror, according to details provided in court. Three White people and one Pacific Islander have also been selected as alternates.

US District Court Judge Lisa Godbey Wood had warned jurors that they would hear evidence of racist statements made by the defendants.

"You may consider each statement against the defendant who made it," the judge said, adding the jury may not consider the evidence to decide if the defendant engaged in the action or to judge the defendant's character, but they may use it to determine whether the defendants acted because of race.

The jurors appeared to be very attentive Wednesday, looking at their individual screens while the evidence was shown but didn't appear to express any emotion.

Leigh McMichael, mother of Travis and wife of Gregory McMichael, appeared solemn. The defendants appeared stoic and emotionless during Vaughn's testimony, looking at the screens in front of them where the evidence could be seen.

Speaking outside the federal courthouse on Wednesday afternoon, Arbery's mother, Wanda Cooper-Jones, said she hoped for "another guilty verdict" by the anniversary of her son's death, February 23.

"Ain't no quitting until we get justice for Ahmaud," Arbery's father, Marcus Arbery Sr., said as he was leaving the courthouse.

Vaughn said she had extracted the text messages from Travis McMichael's phone the day Arbery was killed.

A text message dated January 21, 2019, referenced Travis McMichael meeting a friend at a local Cracker Barrel restaurant. Vaughn read the conversation aloud in court. The friend tells Travis, "This Cracker Barrel up here is full of some other kinds of people." Travis' reply used a racist slur about African Americans.

As this discussion was happening, Arbery's father walked out of the courtroom shaking his head. He returned a short time later, still shaking his head as the testimony continued.

A Facebook message that Travis McMichael sent another friend, Vaughn testified, included a video with a Johnny Rebel song containing a racist slur. The video was played as part of the evidence in court.

The song had been edited onto another video showing a segment from "The Ellen DeGeneres Show" with a young Black boy dancing. The actual video from the show does not use the offensive song.

In another message entered into evidence, dated November 1, 2016, the day after Halloween, Travis McMichael is sent a photo from a friend. Vaughn said the photo appeared to be a "crude attempt" to depict Trayvon Martin after he was killed. The text was laughing about a man in blackface with a red splotch on a hoodie, the friend called it "the winner of Halloween 2016."

Evidence was also entered into record that Vaughn described as showing vigilantism from the older McMichael. Vaughn described a comment from Gregory McMichael on a social media post about a stolen surfboard where he suggested he might catch the culprit, and added: "We still hang horse and board thieves up here. Woe be to the sticky-fingered bastard."

In what appeared to be a personal joke, Bryan was referred to as the "Grand Marshal" in a message from a friend. Vaughn testified that this was a joke that referred to the idea that Bryan would be the grand marshal of an MLK Day parade.

"He would never do that, because he doesn't particularly care for Black people or MLK Day," Vaughn testified as she explained the joke.

Also introduced into evidence was a WhatsApp message dated January 20, 2020, from Bryan to a friend, that was read aloud in court.

"Happy Bootlip Day," Bryan wrote. Bryan went on to say, "I worked like a n***er today," according to Vaughn.

Another set of WhatsApp messages discussed Bryan discovering that his daughter was dating a Black man. A message between Bryan and friend dated February 19, 2020 -- four days before Arbery's killing -- had Bryan using a slur in reference to the boyfriend.

Vaughn said Bryan's daughter's relationship remained an ongoing theme in messages. A photo posted on Facebook of Bryan's daughter and her Black boyfriend together was sent to Bryan in a WhatsApp message on April 8, 2020. Bryan responded that if his daughter did not care about herself, "Why should we?"

The defense argued at the state murder trial that the pursuit began when the elder McMichael saw Arbery running from the direction of an under-construction home, and that he believed he matched the description of someone who'd been recorded there previously. Unbeknownst to McMichael, a neighbor had just called police to report that Arbery was at the construction site alone, and that Arbery ran as the neighbor called, according to testimony.

The prosecution in the murder trial conceded surveillance videos did show Arbery at the construction site multiple times, including the day he was killed, but always without breaking in and without taking anything.

During the murder trial, witnesses testified that the McMichaels did not know for certain that Arbery was at the site that day, or whether the man in the videos had ever taken anything. Prosecutors argued the pursuers acted on rumors and had no immediate knowledge Arbery had committed a crime, which is required to claim a citizen's arrest.

In opening statements for the hate crime trial, a prosecutor said the defendants previously used racist language and followed Arbery because of their perceptions of Black people.

"At the end of the day, the evidence in this case will prove that if Ahmaud Arbery had been White, he would have gone for a jog, checked out a cool house under construction, and been home in time for Sunday supper," Assistant US Attorney Barbara Bernstein told the jury Monday. "Instead, he went out for a jog and ended up running for his life."

The defendants' attorneys, speaking separately, acknowledged the men had used racist language -- but said that their actions toward Arbery were not related to race.

"Greg and Travis McMichael followed Ahmaud Arbery not because he was a Black man, but because he was the man who had been illegally entering the house that was under construction," A.J. Balbo, Gregory McMichael's defense attorney, said Monday.