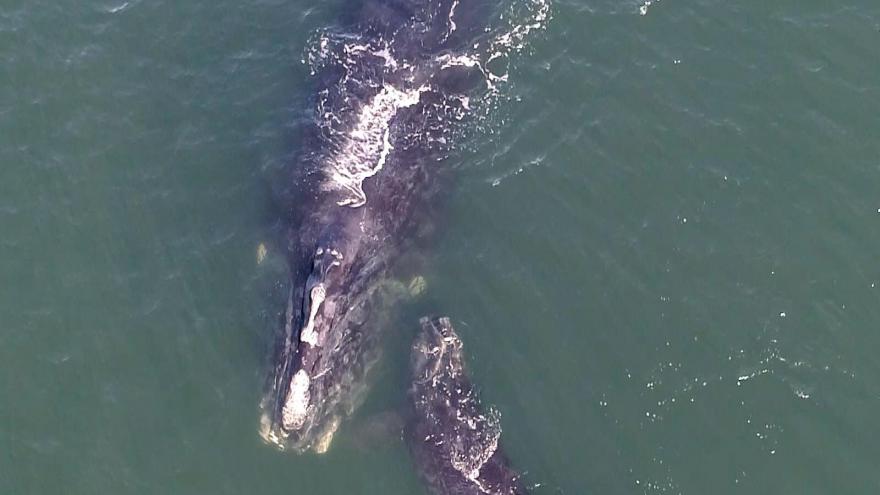 Pictured here is 16 year-old Millipede and her newborn baby.

(CNN) -- The year is ending on a positive note for North Atlantic right whales, a critically endangered species, with the spotting of two newborn calves.

The right whale is one of the rarest marine mammals in the world, according the National Oceanic and Atmospheric Administration (NOAA), and there are fewer than 400 of them left in the world, Jessica Powell, a marine mammal biologist for NOAA Fisheries, told CNN.

One of the babies, spotted on December 4 off the coast of Cumberland Island, Georgia, was born to Chiminea, who is believed to be 13 years old and is a first time mom. The second calf, found off Vilano Beach in Florida three days later, was born to 16-year-old Millipede.

The right whale's calving season begins in mid-November and runs through mid-April.

"With a population at such low levels, every individual counts, and it is great to see these two new calves at essentially the beginning of the calving season," Jamison Smith, the executive director of the Blue World Research Institute (BWRI) who captured photos of the babies using drones, told CNN.

"It gives us hope that there will be more over the next few months. This species needs all the help they can get so that we might be able to show our grandkids a right whale in the future rather than just tell stories about them."

The leading cause for whales' deaths and injuries involve human interaction, including vessel strikes and entanglement in fishing gear, Powell said. It is illegal for anyone, including boats, drones, surfers, and swimmers, to approach whales within 500 yards without a research permit.

"It's a species that is struggling and it's essentially all hands on deck to try and save these whales," Powell said. "We advise folks anywhere in the southeast to be really cautious when on the water during the calving season, to look out for calves, slow down around them, and give them space. Whatever we can do to give these whales a fighting chance."

This species of whale has also been experiencing an unusual mortality event (UME) over the past three years, according to NOAA. Since 2017, at least 32 dead and 13 seriously injured whales have been documented by the organization.

In November, biologists mourned the loss of a North Atlantic right whale calf who was discovered dead on the shore of a barrier island off North Carolina. Preliminary reports indicated that the animal died during birth or shortly after, according to Powell, but scientists are waiting for pathology results to confirm the cause of death.