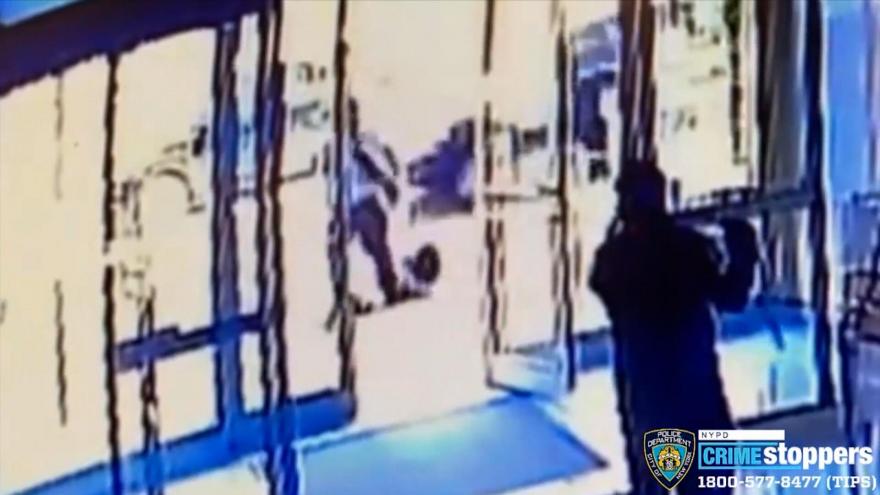 Two New York doormen who closed the doors to their building's apartment lobby while a 65-year-old Asian woman was punched and kicked outside have been fired, according the building's owner.

(CNN) -- Two New York doormen who closed the doors to their building's apartment lobby while a 65-year-old Asian woman was punched and kicked outside have been fired, according to the building's owner.

The Brodsky Organization, which owns the building at 360 W. 43rd St. in Manhattan, said in a statement Tuesday that it had completed an inquiry into the doormen's response to the March 29 attack.

"Although the two employees seen on video closing doors in response to the perpetrator brandishing a knife did then emerge to assist the victim and flag down an NYPD officer, both remain suspended pending determination of whether all emergency protocols were sufficiently followed," they said in a statement to CNN.

"We are extremely distraught and shocked by this incident, and our hearts go out to the victim," it added.

It's unclear what specific emergency and safety protocols the company has in place, and CNN has reached out to Brodsky Organization for further clarification. The two doormen's names have not been made public.

A longer video obtained by CNN gives a fuller picture of the incident -- the viral clip appeared to simply show someone closing the door to the building after the woman was brutally attacked.

In the longer version, which captures more than six minutes of footage, a delivery person initially appears to witness the attack and the two doormen come to the door only after the perpetrator begins to walk away.

After one person closes the door, the three individuals inside appear to wait about a minute for the perpetrator to leave the vicinity before responding to the situation. During that time, two other people came and went from the building.

Within a couple of minutes, an emergency vehicle pulls up to the curb.

The New York Police Department said in a news conference the next day that there were no 911 calls for the incident and patrol officers drove by and came upon the victim after she was assaulted.

The doormen were suspended after the attack, pending the outcome of the investigation.

Building residents had defended the men in an open letter to the organization, saying surveillance footage "most certainly mischaracterizes" their actions and that they did not believe the staff members had "failed us as residents, our Midtown Manhattan community, nor our fellow AAPI (Asian American and Pacific Islander) New Yorkers."

Local union SEIU 32BJ identified the two fired employees as a doorman and a concierge who are members of the union, but said they were not speaking to news media at the moment.

President Kyle Bragg noted in a statement that the union is "comprised of majority immigrant, Black and brown workers."

"Under their collective bargaining agreement, both employees have the right to file grievances. There is a contractual process to challenge terminations. The employees have initiated that process, but the process is just beginning and can take weeks or months," Bragg said. "We take anti-Asian hatred, and all forms of discrimination, seriously."

The alleged attacker has been charged

A spokesperson for the Manhattan District Attorney's office said Elliot has been indicted, though the charges in the indictment are sealed until later this month.

Elliot, 38, allegedly made anti-Asian statements toward the woman during the physical assault. The woman had serious injuries, including contusions and a fractured pelvis, and was treated at a Manhattan hospital, according to the NYPD.

The Legal Aid Society, who is representing Elliot, asked that the public reserve judgment on their client.

"Mr. Elliot has a constitutional right to counsel and due process," the organization said in a statement to CNN. "As with every client we represent, he will have unfettered access to our legal resources and expertise. We are fully reviewing this case and will have additional comments in the coming days and weeks."

The midmorning assault took place against a backdrop of attacks against Asians and Asian Americans, including the Atlanta-area spa shootings that killed eight people, six of whom were Asian women.

The NYPD recorded 31 anti-Asian hate crimes in the city so far this year, compared to zero this time last year.