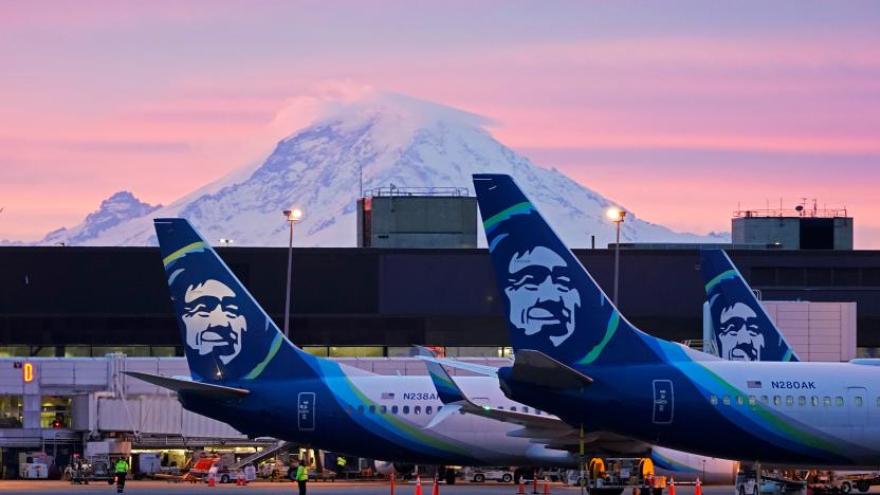 Two Muslim men have filed a federal discrimination suit against Alaska Airlines for being removed from a plane prior to takeoff.

(CNN) -- Two Muslim men have filed a federal discrimination suit against Alaska Airlines for being removed from a plane prior to takeoff after a passenger alerted the crew that the men were texting and speaking in Arabic.

According to a complaint filed last week in federal district court, the plaintiffs, Abobakkr Dirar and Mohamed Elamin, allege they boarded a flight from Seattle to San Francisco on February 17, 2020, and after being seated in their first-class seats, they started speaking and texting in Arabic. Another passenger, who did not speak Arabic the complaint says, saw some of Dirar's text messages and told the crew who removed Dirar and Elamin from the flight due to what they claimed to be a "ticket issue."

Once Dirar and Elamin were off the flight, the men spoke with an Alaska Airlines manager who translated their text messages and the messages were deemed not to be a threat, but the men were subsequently surrounded by law enforcement, according to the complaint.

According to the complaint, they are seeking damages against the airline.

The pair was booked on subsequent flights separately to San Francisco, but Elamin had to sit in a downgraded seat and both passengers arrived at their destinations hours later than originally intended.

Dirar and Elamin's attorney, Luis Segura, told CNN in a statement that Alaska Airlines could have handled the situation better after finding that the complaining passenger's claims were baseless.

The airline "...could have acted responsibly by calming tensions, apologizing to our clients for their mistreatment, and allowing our clients to remain in their rightful seats, he said. "Instead, Alaska Airlines chose to pile onto the bigotry by using these two Black, Muslim American passengers as props in an admittedly unjustified, unnecessary, and self-serving display of security theater. By bringing this lawsuit, our clients not only seek justice for themselves, but also for an entire community tired of being scapegoated to justify discrimination in air travel."

When asked why it took more than two years to file a lawsuit, Segura told CNN that in December of 2020, Alaska Airline's counsel stated that they would be conducting an internal investigation into the matter but never reached back out to his clients.

"Our greatest responsibility is to ensure that our flight operations are safe every day, and that includes complying with federal regulations on investigating any passenger safety reports. Since this case remains pending litigation, we're unable to share any further comment or details at this time."